The title of the Mike Daisey’s ambitious new set of live story-telling events, Great Men of Genius, evokes a midcentury biography series for teenaged boys. But his actual subjects, one on each evening spread out over the next few weeks at Joe’s Pub at The Public Theater, veer off, oh, just a tad. It’s not Thomas Edison or Benjamin Franklin, no, but rather guys like P. T. Barnum, (the night I just saw), Nicola Tesla, (Jan. 20th), and still to come, Bertolt Brecht (Jan. 27th) and L. Ron Hubbard (Feb. 5).

Geniuses? Well, now that I think of it, I can see the reasoning there.

And that small shift in perception is just the beginning of Daisey’s entertaining and subtly subversive agenda.

Daisey has been slowly building a solid reputation as a theatrical storyteller for several decades now. But in 2012, he became slightly notorious when a hugely popular 39-minute excerpt from his live show The Agony and the Ecstasy of Steve Jobs that aired on the radio on This American Life was shown to contain fabricated elements. The show, which helped foment criticisms of Apples practices in China, described the hardships of workers at a factory in Shenzhen that makes iPhones and iPads that Daisey had visited with an interpreter. The live solo show which was also seen at The Public, as well as other theatres across the country, had been described as “nonfiction.”

So, it was an interesting subtext that he made not even a glancing reference to that whole flap, listening to him wax philosophic and comic on the king of humbug. Phineas T. Barnum, whose Emporium in Lower Manhattan was a profitable palace of palaver on a mythic scale, had acts like Jumbo the Elephant, Zip the Pinhead, The World’s Oldest Living Woman, Chang and Eng, the conjoined Siamese Twins, and a slew of other replicas, rarities, boondoggles and outright lies. Daisey gives us some highlights of Barnum’s autobiography, but spends just as much time on seeming digressions into examinations of our own popular culture and personal biography.

His monologues are kind of like vinyl LPs comprised of spoken word songs with moments of silence in between them. In one of this particular evening’s riffs, a discussion of the structure and magic of burlesque, Daisey notes that it’s often what isn’t revealed that makes the biggest impact, or “what is shown and taken away,” as he put it.

And the same is true of his tales. He’s got a terrific way with words. He speaks of something “pricking the hind part of your brain,” and lays out the aphoristic, “if something isn’t interesting, it’s probably not true.” He’s got his own gimmicks, a high-pitched whine for laugh lines, and that David Sedaris-esque little turn right at the end of section that asks you to reconsider what you’ve heard and its implications.

But what he doesn’t say is just as important here, too. He reveals Barnum, and, incidentally, himself, without making the comparison explicit, as people who’ve experienced early disappointments in the American Dream and been left as outsiders to figure out alternative means of arranging concepts of success and satisfaction.

Daisey wants to turn things upside down, shake them like a snow globe and transform our view of our little ordered lives. 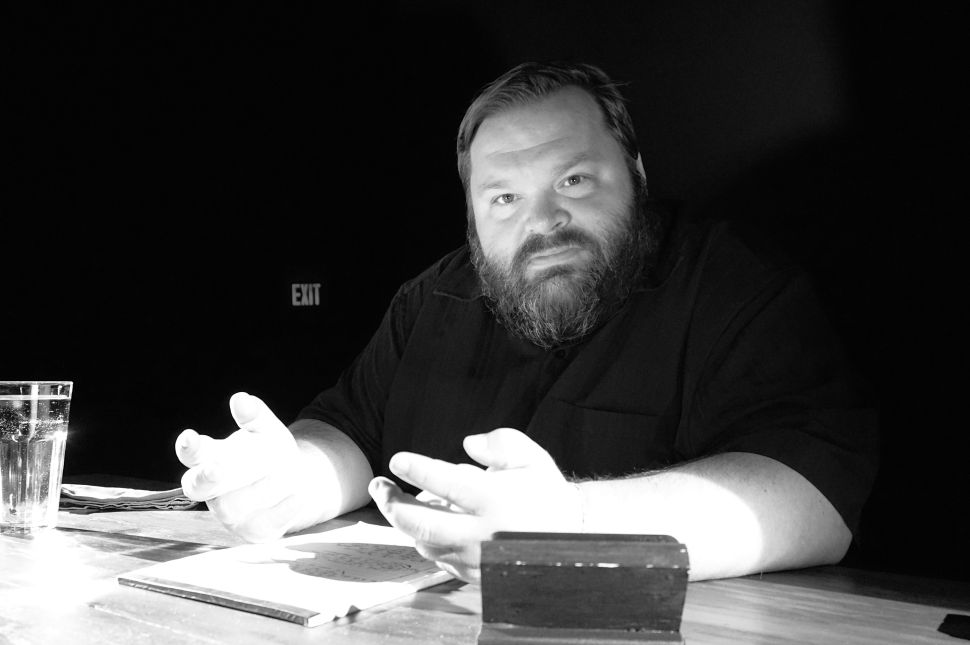