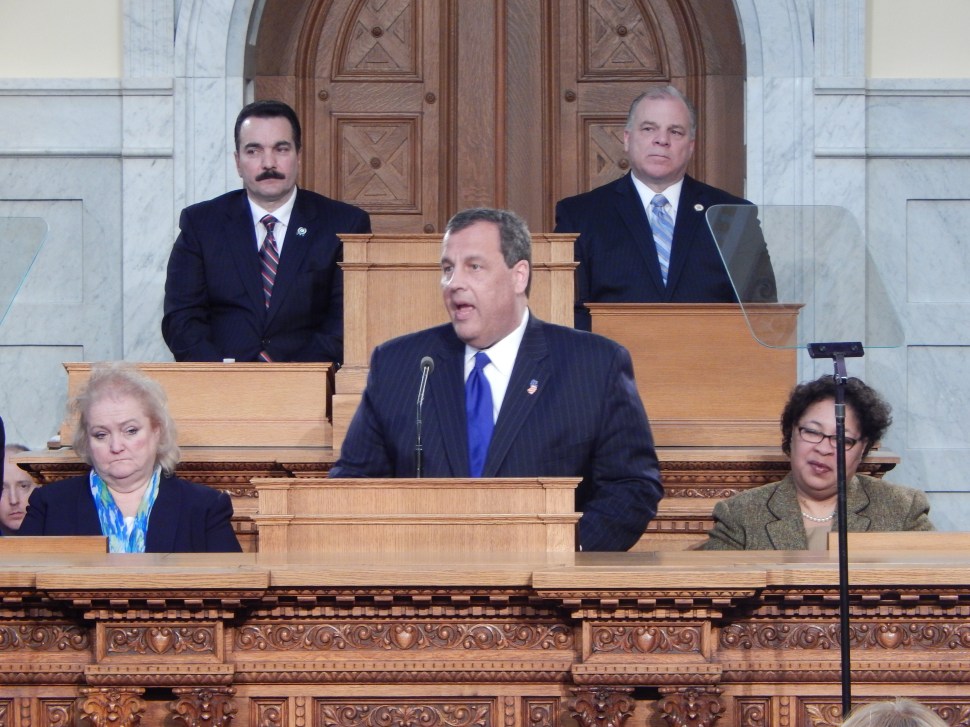 Christie makes national play in State of the State speech

TRENTON – Pawing at a national-sized runway in advance of a 2016 presidential bid with Fox News and CNN in the room, Gov Chris Christie consigned those unnamed statewide critics to the “overly partisan corners of this chamber” as he struck out at nailing broad Republican chalk points, throwing early elbows in his State of the State Address at Washington. D.C. and “big government.”

While attempting to deflect those criticisms of himself to unfair criticisms of a long defamed State of New Jersey, Christie patted the legislature on the back (“I want to congratulate you [for bipartisanship.”) and, in the midst of scalding Bridgegate headlines and blow back from his relationship with Dallas Cowboys pooh-bah Jerry Jones, intently stayed focused on the positive. (Pizarro/PolitickerNJ)

Fulop on Christie’s State of the State speech: What about Jersey City?

Fulop on Christie’s State of the State speech: What about Jersey City? | New Jersey News, Politics, Opinion, and Analysis

TRENTON – While some observers of the New Jersey political scene were dismayed with the national references made by Gov. Chris Christie during his State of the State speech in Trenton on Tuesday, one former Garden State governor was pleased that Christie put a non-profit services program that he backs into the national spotlight. (Bonamo/PolitickerNJ)

McGreevey thanks Christie for putting anti-recidivism program in national spotlight during State of the State speech | New Jersey News, Politics, Opinion, and Analysis

TRENTON — A top Democratic lawmaker relished an opportunity to tear into Gov. Chris Christie’s State of the State address this afternoon, saying the content of the top executive’s speech reveals an upwardly-mobile politician more concerned with his national image than serving his constituents at home.

Assemblyman John Wisniewski (D-9), a long time critic of the Republican governor and his methods, said Christie was “clearly pitching his bona fides to people beyond New Jersey” during his hour-long speech, given in front of a packed audience of New Jersey lawmakers and political observers on the Assembly floor this afternoon. Christie, in his last term as governor, is publicly mulling a run for the Republican nomination in 2016, and is widely expected to make a final decision on the subject later this month. (Brush/PolitickerNJ)

TRENTON – In his State of the State speech on Tuesday, New Jersey Gov. Chris Christie pointedly noted progress made in terms of governance, economic development, education and public safety in a major Garden State city: Camden, not Newark, the state’s largest city. Then in the same address, he challenged the leadership of urban New Jersey, stating that all cities can do the same. (Bonamo/PolitickerNJ)

TRENTON — The General Assembly’s top Republican this afternoon offered a positive review of Gov. Chris Christie’s latest State of the State Address — but did suggest that the content of the governor’s speech revealed concern for a wider audience.

“Here’s somebody that can deliver a speech really well, and what he’s saying is if we don’t get more competitive, we’ll lose more businesses, we have to make sure that people who have a serious problem, that we try to help them, and the third thing is we really have to work together,” Assembly Minority Leader Jon Bramnick (R-21), a longtime ally of the governor’s, told PolitickerNJ following Christie’s speech. “That’s what I drew from it.” (Brush/PolitickerNJ)

TRENTON – New Jersey Gov. Chris Christie is expected to tout his record during Tuesday’s State of the State address before an audience eager to hear what the potential 2016 Republican presidential candidate has to say. But a group of about 75 protesters braved the cold outside of the State House hours before Christie’s speech to talk about concerns they don’t expect the Garden State’s governor to mention. (Bonamo/PolitickerNJ)

TRENTON, N.J./NEW YORK, Jan 13 (Reuters) – New Jersey Governor Chris Christie on Tuesday made “renewal” of his state and country a central theme in his annual speech to state lawmakers that hinted at presidential aspirations.

Christie, under pressure to decide if he will seek the Republican nomination for president in 2016, discussed what he called a “bloated national government” and a need for bi-partisanship during his state of the state speech. (Kelley and Russ/Huffington Post)

Christie: Mercedes-Benz’s move to Georgia proves taxes are too high in N.J.

TRENTON — News that Georgia leveraged $23 million in economic incentives to woo Mercedes-Benz from New Jersey provided Governor Chris Christie quite the political opportunity during the State of the State –– the governor trumpeted New Jersey’s own billion-dollar economic incentive programs while simultaneously calling for tax cuts. (Kleimann/NJ.com)

(Bloomberg) — Governor Chris Christie, on the brink of announcing whether he’ll run for president, will use his annual New Jersey agenda-setting speech to call for an “American renewal.” (Young/Bloomberg)

The Port Authority should close and sell two money-losing marine terminals in Brooklyn to help close annual deficits at its ports division that may reach $107 million in 2029, according to a report.

Selling the Red Hook Container Terminal and the Brooklyn-Port Authority Marine Terminal to a housing developer in the gentrifying borough would generate cash to help stem the losses, according to a report released today by the Citizens Budget Commission. The Port Authority should also support efforts by shippers to negotiate cuts to the number of longshoremen who load and unload ships and royalties they pay to their union, according to the business-backed watchdog group. (Braun/Bloomberg)

Such is the thesis of the Democratic National Committee’s new attack ad against New Jersey Gov. Chris Christie (R), which debuted Tuesday morning before the governor’s State of the State address later in the day.

The ad focuses on Christie’s time in the national spotlight this past year, and proclaims that his platform is “New Jersey Firstish.” Yes, this ad is all about 2016, even though the primaries are still a year away, and Christie hasn’t declared anything. (Fuller/The Washington Post)

Vowing to quickly sign legislation that would lower taxes, New Jersey Gov. Chris Christie delivered a State of the State address Tuesday calling for bipartisanship and more economic stability in his state as he ponders a run for the White House.

Christie, a Republican serving his second term, called New Jersey a state with “assets that many other states just cannot match.”

Christie’s State of the State Focused More on the Nation

New Jersey Gov. Chris Christie delivered his fifth State of the State address Tuesday, but it sounded more like a presidential announcement.

Less than two years away from Election Day, Christie sent his firmest signal yet that he intends to run for the White House in 2016, with a decidedly national theme, coming off a 2014 spent traveling the country on behalf of Republican gubernatorial candidates. “We need a New Jersey renewal and we need an American renewal,” Christie declared several months before he is expected to make his candidacy official. (Miller/TIME) 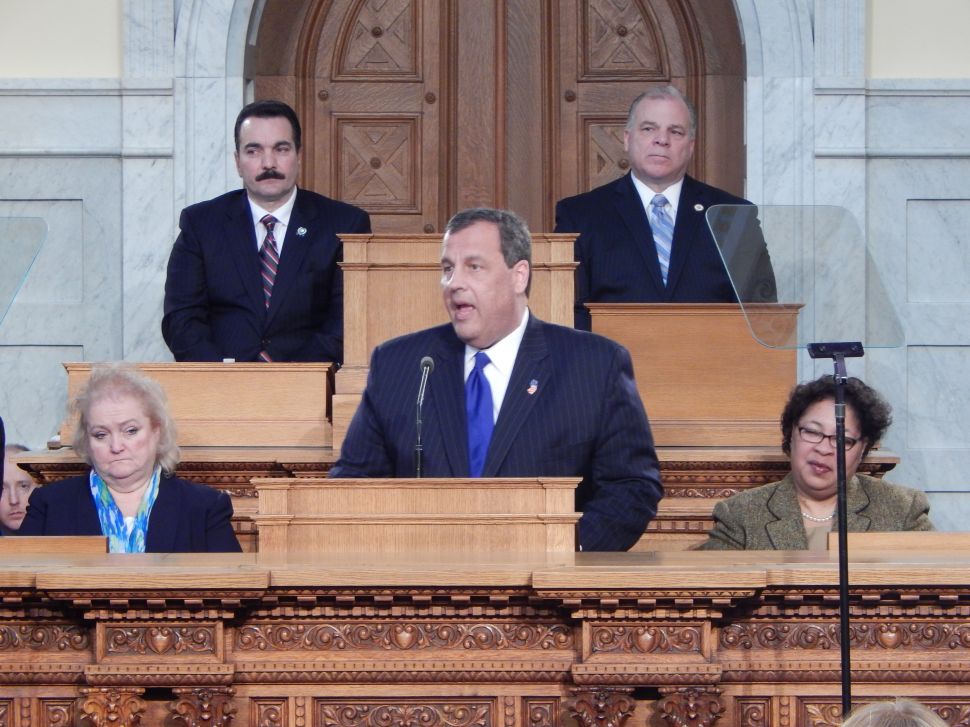