On the Beach: Christie’s move gives Brown a win in unfolding legislative drama

The derivative ad would not feature that famous Greenwich Connecticut clench delivery by New Jersey’s eminent elder Republican statesman, but rather, likely, the narration of someone like Regis Philbin, secured for the job on a recommendation by Camden County Democrat Kelly Ripa.  (Pizarro/PolitickerNJ)

‘Surprised’ by announcement, Whelan will wait for details on AC emergency manager plan

One of the officials arguably closest to the economic and fiscal fallout in Atlantic City hesitated to judge the decision by Gov. Chris Christie this afternoon to appoint an emergency management team to supervise the city’s budget and finances, saying he “still doesn’t have the answer — no one does” as to how the plan will actually work.  (Brush/PolitickerNJ)

Christie at Edgewater fire scene: “I’m here to make sure” displaced not forgotten

EDGEWATER – New Jersey Gov. Chris Christie, criticized in recent weeks for spending too much time traveling to set up a potential 2016 Republican presidential nomination bid, made sure that in the wake of Wednesday night’s devastating fire in Edgewater, he was front and center to offer the state’s help.

“At times like this, what people are most concerned about is being forgotten,” said Christie on Thursday as residents of the Edgewater apartment complex that was gutted by fire on Wednesday streamed into the borough’s community center seeking relief, some greeting the governor. “That’s why I’m here – to make sure that people know we will not forget. We will make sure that we do everything we can to try to assist them, and to have this transitional period be as short, safe and comfortable as it can be for themselves and their families, and then to move on from there.”  (Bonamo/PolitickerNJ)

The fire in Edgewater that ruined a residential complex but did not result in the loss of human life has motivated one lawmaker to revisit a bill untouched last year by Gov. Chris Christie.

Whether it was during his recent State of the State address or during his travels across the nation and around the world, New Jersey Gov. Chris Christie has made no secret of his ambition to be President. At the same time, it is no secret that New Jersey is still facing serious situational and structural problems that have yet to be fully addressed.

PolitickerNJ went into the streets of New Jersey, this time to the bellwether county of Bergen, to ask a question some Garden State residents have on their minds: Has Gov. Christie abandoned New Jersey?  (Bonamo/PolitickerNJ)

Brown wants to ‘put partisan politics’ aside, while Mazzeo looks to move ahead on PILOT program

ATLANTIC CITY — While his Democratic counterpart in the legislature spoke warily of the decision, Republican Assemblyman Chris Brown (R-2) offered a tentative defense of the recent announcement by Gov. Chris Christie to install an emergency management team at the head of this beleaguered city, as well as the ongoing deliberations process marked by the state’s third economic summit here today.  (Brush/PolitickerNJ)

Brown wants to ‘put partisan politics’ aside, while Mazzeo looks to move ahead on PILOT program | New Jersey News, Politics, Opinion, and Analysis

A former contractor of the Newark Watershed Conservation and Development Corporation (NWCDC) today admitted his role in a bribery and kickback scheme involving an employee and consultant of the NWCDC, U.S. Attorney Paul J. Fishman announced.  (Pizarro/PolitickerNJ)

Guardian on state takeover in A.C.: ‘Table of brotherhood is open’

New Jersey Gov. Chris Christie came under fire in November after vetoing a politically-charged bill that would have banned the use of certain pig crates in his state. And now, another animal welfare bill is on Christie’s desk. This one, however, has an unusual advantage: the backing of the daughter of Christie’s musical idol, Bruce Springsteen.  (Frumin/MSNBC)

As Chris Christie gears up for a potential 2016 bid, it looks like he’ll have trouble even wrangling his own state.

In a new Quinnipiac poll, nearly 3 in 5 registered voters in New Jersey do not think their Republican governor would make a good president, according to Reuters. (Benson/TIME)

Why Chris Christie Should Be Able to Raise $100 Million

Veteran Republican fundraiser Jack Oliver says it’ll take at least $100 million for a presidential hopeful to seriously compete in the party’s primary contests. As luck would have it, New Jersey Governor Chris Christie has already shown he can raise that kind of money.

With Christie at the helm, the Republican Governors Association banked $106 million over two years, a record that helped the party win seven new governorships last November. With Wednesday’s swearing-in of Maryland Governor Larry Hogan, Christie is officially done with his RGA duties. He now turns his attention to his own ambitions, and the challenge of keeping pace with former Florida governor Jeb Bush’s goal of raising $100 million over the next three months.  (Bykowicz/Bloomberg)

DES MOINES — The largest gathering of potential Republican presidential candidates so far will descend on Iowa on Saturday to test their messages at a forum shaping up as the informal starting gun for the 2016 campaign.

The event, which is being hosted by Representative Steve King, Republican of Iowa, offers Gov. Chris Christie of New Jersey, the most prominent establishment figure on the schedule, a chance to test his appeal among grass-roots conservatives. (Gabriel and Parker/The New York Times)

Finding a job in New Jersey isn’t getting much easier.

The state ended 2014 with a gain of just 29,000 jobs, the Department of Labor and Workforce Development reported Thursday, a pace that was less than half as fast as the nation.

“There’s no way to sugarcoat the news,” Rutgers University economist James W. Hughes said. “We have been lagging the nation.” (Diamond/Asbury Park Press)

Chris Christie has built his national reputation within the Republican Party, in large part, on his ability to win election twice and govern as a conservative in a deep-blue state.

But if his widely expected 2016 bid for the Republican presidential nomination is successful, there is scant evidence Christie will be able to take back New Jersey from the firm grasp Democrats have had over the state in recent national elections.  (Conroy/Real Clear Politics)

Source: Kyrillos will be with Christie

Amid all the rumor mongering over state Senator Joe Kyrillos’ (R-13) attendance at a Jeb Bush fundraiser, a source close to the senator today cried poppycock.

Kyrillos will be with Christie in Christie’s presidential bid, the source insisted.

Source: Kyrillos will be with Christie | New Jersey News, Politics, Opinion, and Analysis 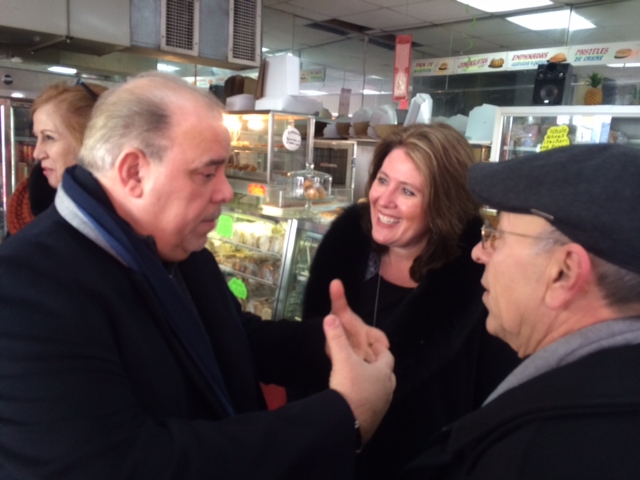