There’s a gray area following the holidays, a period of social thawing when party pickings can be thin. Luckily for Shindigger, that ended last week with a handful of uniquely New York events beginning with The Cinema Society and Tod’s premiere of Song One.

The indie flick, earning ample buzz for Anne Hathaway’s pared down performance, premiered on Wednesday evening at The Landmark Sunshine Cinema, a New York landmark in its own right for artsy films. The movie features scenes shot at The Bowery Ballroom and Grand Central Station. “Every moment in New York is an awesome New York moment,” Ms. Hathaway told us of filming in Manhattan. “It was hot. This last summer was fine, but the summer before when we filmed this, it felt like we were living inside of a mouth. We had some awesome moments though. We would film at great locations, and there would always be a killer bar down the street, where we could go for a beer at the end of the day. You’re very lucky if you make a friend on a film, and I feel like I made a family on this one.”

Later in the evening at another “killer bar,” this time Omar’s La Ranita in Greenwich Village, Ms. Hathaway’s co-star Johnny Flynn gushed about her singing chops. “Anne and I did a lot more singing when we were just hanging out and goofing off between takes, and doing lots of song sharing,” he told Shindigger while tucked away in a shadowy corner of the eatery.

Later in the evening, the cool kids decamped across the East River for the launch of The Mirror Cube at Baby’s All Right in Williamsburg. The new website plays host to recommendations by artists covering film, music and art happenings in New York and Los Angeles. Guests including actor Penn Badgley, designer Timo Weiland, The Flour Shop’s Amirah Kassem, SoHo Arts Club founder Harif Guzman, and Wes Anderson darling Waris Ahluwalia celebrated with a handful of indie performances and a DJ set by Alexander Dexter Jones—the son of socialite and rock star wife, Ann Dexter-Jones

The following evening, a group of passionate Italianos spent their night petitioning for UNESCO World Heritage Recognition of the classic Neopolitan Pizza with a panel discussion at Rossopomodoro in The West Village. For guys like Rossopomdoro’s  CEO  Simone Falco, pizza is serious business—especially when it’s your lifeblood.

Another set of priceless artifacts, this time less edible, were celebrated the next evening at The Park Avenue Armory, at the Winter Antiques Show opening night party. The High Priestess of Home Design, Martha Stewart, was, of course, in attendance with her keen eye (and deep pockets) for covetable antiques. Only New York City’s former Mayor Michael Bloomberg, who also attended, rivaled her in both aforementioned departments.

For younger collectors with an eye for cocktails over clocks and crocks, Christie’s hosted a Friday evening festivus aptly titled, “Old Masters and New Mixologists.” With the walls adorned with priceless, centuries-old Madonnas, young professionals got their weekend started with a faux tattoo station and fruity confections. The resident Old Master Painting Specialists Joshua Glazer and Emma Kronman led the pack through the collection. “I hear we have snow coming,” Ms. Kronman told the crowd. “So have fun tonight—while you still can!”

She was right. With a benefit and a ballet already cancelled and more coming, thanks to this week’s snowpocalyptic storm, perhaps it’s best to curl up with some of New York’s most unique offerings—pizza, booze and movies. 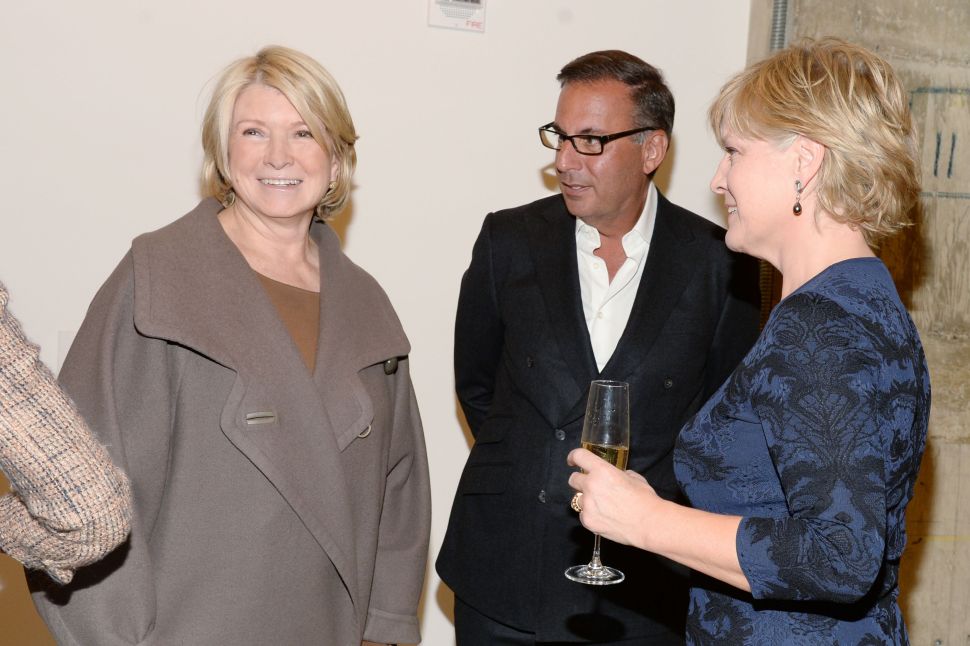