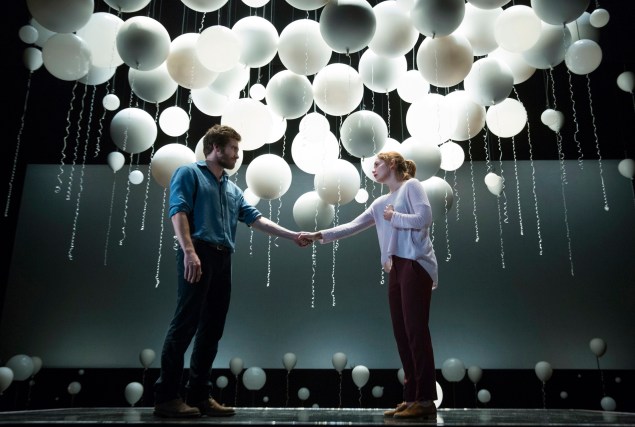 The new year on Broadway is off to a thundering hobble with Constellations, a load of arcane rubbish disguised as a play—imported from London, word-processed by the pretentious poseur Nick Payne and starring a deeply deluded Jake Gyllenhaal, in his second bid to be taken seriously as a stage actor instead of just another pretty face. The last time I saw anything this stupefyingly dreadful was a disaster called If There Is I Haven’t Found it Yet, also imported from London, belched out on a faulty computer by Nick Payne and starring the same misguided Jake Gyllenhaal. Something alarming has happened to him in the interim. He’s forgotten how to talk, and what comes out in a British accent phony as a $20 Rolex on Seventh Avenue, is a worthless garble of tongue-tied gibberish. Clearly the theatre is not his métier.

Of course it becomes crystal clear within five minutes after the whole thing begins that nothing Mr. Gyllenhaal says is going to be of any value whatsoever. The stage at the Samuel J. Friedman Theatre on W. 47 St. is full of white balloons. Sometimes, one by one, they light up. The rest of the time they just hang there, like fat albino bats, signifying nothing until, one by one, they drop to the ground. But even when the balloons light up, the evening at hand, chloroformed by director Michael Longhurst to the point of obfuscation, never comes to life. A man called Roland (Mr. Gyllenhaal, in an ugly if trendy beard) and an attractive woman called Marianne (Ruth Wilson, who won a Golden Globe on Sunday night for some television show I’ve never seen) appear. “Do you know why it’s impossible to lick the tips of your elbows? They hold the secrets to immortality, so if you lick them, there’s a chance you’d be able to live forever. But if everyone did it, if everyone could actually lick the tips of their elbows, then there’d be chaos. Because you can’t just go on living and living and living.” They both distort their arms and try painfully to lick their elbows.

Blackout. When the lights come back, Marianne says, “Do you know why it’s impossible to lick your elbows,” blah, blah, blah. The scene repeats itself three times. The nonsense dialogue is repeated three times. They both have a go at licking their elbows and that goes on three times, too. Dumb crap like this season’s The River—and now Constellations—gets imported from England a lot, and there is always somebody at the New York Times who calls it art. I am always befuddled by the number of film stars or TV performers willing to lend their names to it in order to turn a leaden flop into a profit-making hit, or the number of guileless producers anxious to sell tickets to mobs of fans and followers who don’t have a clue what they’re watching but applaud vigorously through the curtain calls anyway.

This time, Mr. Gyllenhaal plays a beekeeper. Ms. Wilson works a desk job at Cambridge, analyzing theoretical quantum cosmology readings, whatever that is. Their topics of conversation, spread across 70 excruciating minutes of twaddle, range from the proper way to store honey in trash bags to what it feels like in bed to have sex with a man who has dandruff.

Later: “Where have you been?”

“Why didn’t you answer me?”

“What does that mean?”

“Where have you been?”

And on and on. On the third repeat of Roland’s monologue explaining the internecine life inside a hive of honeybees, I wanted to scream. By the third time Marianne got into a weepy tirade about cancer and chemotherapy, I was asleep. When I came to, they were speaking in sign language, which was irrelevant and incomprehensible, but at least you didn’t need subtitles.

There’s a place for experimental existentialist theater, even at these inflated prices, but even the avant-garde should make sense. I couldn’t understand half of what either of these inarticulate actors muttered onstage. Mr. Gyllenhaal definitely needs a microphone. Weaned on mumblecore movies, he can’t project beyond the third row of the orchestra, while Ms. Wilson chirps away at a decibel level so high it can only be understood by sparrows. The scenes are brief, but seem much more offensive than long, drawn-out scenes normally do because they are repeated and replayed so many times, like bad acting-class exercises dreamed up on the spot to test the versatility of fledgling actors with no experience. The object of this charade, I guess, is to see how many different ways you can say the same thing at the same time in different parallel universes. Of course, I could be wrong. With indecipherable esoterica this cabalistic, it’s hard to know.

At a time with whole websites dedicated to what plants think and how pets speak, when freaks wear meat dresses and lunatic interior designers decorate apartments in slide rules and cheese graters, nothing makes much sense in a real world that is no longer real. So I guess it’s not surprising that Broadway no longer makes sense, either. If it wasn’t so brain-numbingly goring you might call it a mindfuck. But Constellations makes 70 minutes seem like 70 days at hard labor. 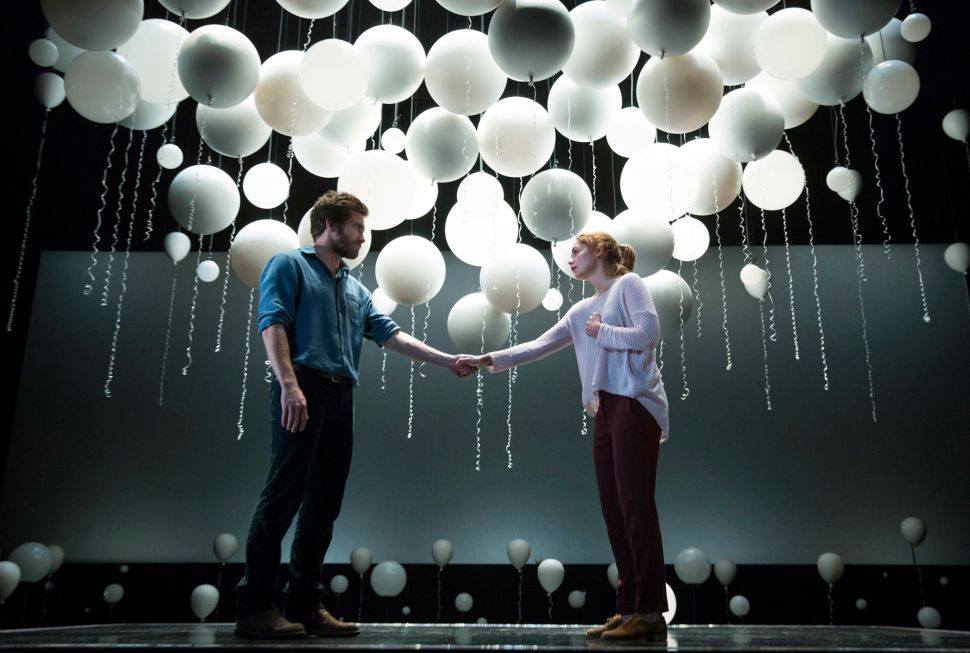