Well, that’s not only a salacious headline; it’s true.

Phillips auction house Thursday auctioned 241 lots of artists’ editions in London, including a handful of nudes by American and British artists. They sold for prices that illustrate you can own an artwork by a famous name for less than the millions of dollars you often read about.

Not that there aren’t caveats to buying limited-editions, which are prints or lithographs which aren’t one-of-a-kind. Art historian and appraiser Victor Wiener encourages possible buyers of multiples to be well-informed about the image they are considering bidding on.

Collectors should ask: “How many of the same image are out there? Are they all the same? Is it one out of five or one out of ten?” Wiener said. Plus, what kind of condition is it in?  “It’s equally important to

ensure conditions haven’t deteriorated from the time it was issued,” he said. Especially when there is more than one copy of an item for sale, it’s key to make sure you’ve bought one in mint condition.

Here’s a trio of nudes by artists whose work are already in the Museum of Modern Art, among other leading institutions:

Bacon was a revered but controversial British painter of bleak imagery who became progressively more focused on themes of personal turmoil and death as his career advanced. In 2013, Bacon’s “Three Studies of Lucian Freud” sold for $142.4 million at Christie’s New York, making it the work of art sold for the highest price at auction ever, beating Edvard Munch’s “The Scream” by $22.4 million. Bacon had another three triptych editions also up for auction at Phillips. This one went for substantially above its pre-sale estimate. 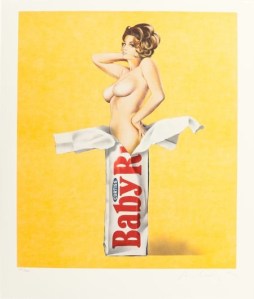 This California artist specialized in nude figurative art is best known for the unexpected combination of curvaceous women and popular snacks, like Baby Ruth bars and Ritz Crackers boxes. Some of Ramos’s most iconic works include a life-sized sculpture of a woman coming out of a Chiquita banana, along with images of ladies lounging in martini glasses. He originally rose to prominence along with the Pop artists of the 1960s, but has had a long career.

Known for her intimate, often androgynous, portraits of celebrities, Peyton’s style of delicate brushstrokes and defined red lips became notorious in the ‘90s with her series on musician Kurt Cobain, which was entirely based on photographs of the Nirvana leading man. Peyton has progressively delved more into personal themes, although she painted singer Justin Bieber in 2013 and rapper Eminem in 2002. Often associated with the Young British Artist movement, she was actually born in Connecticut and studied at New York’s School of Visual Arts.