The leader of one of the city’s five police unions said today that Mayor Bill de Blasio, at odds with the NYPD for several months now, will not acknowledge that there’s even a rift between the two parties.

Michael Palladino, the president of the Detectives’ Endowment Association, said Mr. de Blasio should offer some kind of apology to police and realize the depth of their resentment toward him.

“Based on my own life experiences, in order to address or fix a problem, you first have to acknowledge that problem exists and at this point, I’m not convinced the mayor acknowledges that,” Mr. Palladino told Geraldo Rivera on WABC.

Mr. Palladino said Mr. de Blasio was struggling in his role as a progressive candidate for office who became mayor of a large city. “I think candidates like activists kind of get away with saying whatever they want to say and people expect them to say just about anything.”

“But once you are actually elected to hold a position, you have to realize that what you just say, what does comes out of your mouth, you’re held to a higher standard and you have to anticipate the impact that your words are going to have and that’s what started this whole rift between the NYPD and City Hall,” he added.

In the ongoing battle between Mr. de Blasio, a liberal Democrat and champion of police reform, and the NYPD, Mr. Palladino has been one of the quieter voices. Patrolmen’s Benevolent Association President Patrick Lynch blamed Mr. de Blasio for creating an anti-police environment that led a man to murder two cops on patrol last month and Edward Mullins, the president of the Sergeants Benevolent Association, has been an explosive and reliable critic of the mayor.

Mr. de Blasio rankled police unions and rank and file cops after he expressed sympathy for anti-police brutality protests that broke out after grand juries failing to indict white police officers in the deaths of black men in Staten Island and Ferguson, Mo. On the night of the Eric Garner decision in Staten Island, Mr. de Blasio said he told his biracial son to be careful when dealing with the NYPD, a comment that enraged union leaders.

Since the murder of two officers on December 20 of last year, police have literally turned their backs on Mr. de Blasio three times. The mayor, not believing he has anything to be sorry for, did not apologize to officers for past comments he made.

The PBA and SBA are also negotiating new contracts with the city, another point of contention that those close to Mr. de Blasio argue is a source of the discontent.

But Mr. Palladino said an apology would go a long way. “I think that they have to acknowledge that some of the comments and the public statements that were made offended the police or maybe a statement that tells us that if any comments or actions that these elected officials may have had or may have made or may have contributed in any way towards the execution of the officers–they need to tell us that that was not their intention.” 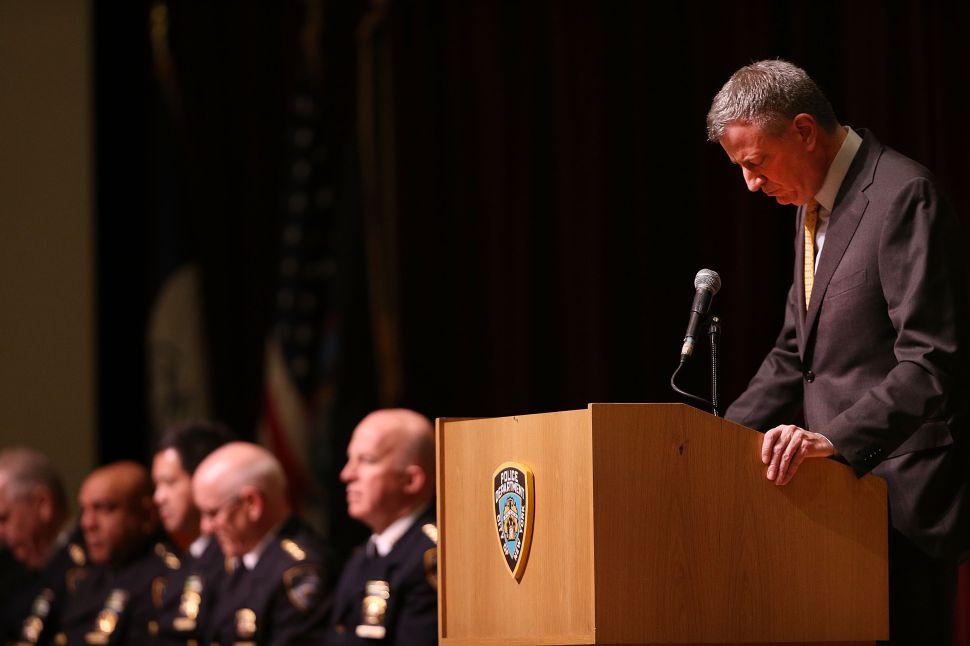