NEWARK – On the 86th birthday of Martin Luther King, Jr., more than 150 protestors used a tactic often deployed by the slain civil rights leader – a sit-down, civil disobedience protest, this time on a Newark bridge to support better working conditions at nearby Newark Airport.

“If we stick together, and we continue to fight the good fight, we can get whatever we need for working families in this city, and working people in this state,” said Newark Mayor Ras Baraka as an assembly of airport workers, politicians, clergy and labor activists gathered at Newark’s Weequahic Park on Thursday before they marched to the middle of Haynes Avenue Bridge overlooking the airport’s control tower. “The folks at the airport should be ashamed of themselves for not doing what they know they should do when they are making billions of dollars in profits every year and workers can barely feed their families. Do the workers right at the airport.”

State Sen. Ray Lesniak (D-20) noted that he made a detour from his nearby Elizabeth home to attend the protest.

“I had a committee meeting in Trenton today, but after meeting with your members and hearing stories of low wages and hard work and no health benefits for many of you, I said screw the committee meeting,” Lesniak said. “I wanted to be here with you.”

On the bridge sitting down in protest, Nancy Vazquez, a skycap at the airport for 22 years, noted one reason why the workers felt the need to take action.

“I make $2.13 an hour,” said Vazquez, 41, of Newark. “A skycap position is a tip-based job. But after 9/11, with airlines merging and new machines installed so people can check themselves in, our industry changed, but our wages did not. We want to make a decent salary so we can live in New Jersey. Now, we are struggling to live.”

According to a June 13, 2014 Port Authority press release, effective July 31, 2014, wages for workers performing covered services at these airports would increase by $1 per hour for those earning $9 per hour or less. Effective February 1, 2015, the wages for these workers would increase to $10.10 per hour. Once the wage level of $10.10 per hour is established, beginning February 1, 2016, wage levels will be indexed to the Consumer Price Index for Urban Wage Earners and Clerical Workers. In addition to the wage increases, all contractors subject to the policy and these rules shall provide their workers with a paid holiday for Martin Luther King, Jr. Day.

But according to labor union representatives at the rally, a self-imposed deadline to put these wage changes in place by Sept. 30, 2014 has yet to happen, along with any movement towards promised health benefits and enhanced wages in the future. Union officials also claimed that on the eve of the annual MLK observance, a paid holiday has yet to be established.

“We’re here today because the Port was supposed to come out with a policy for enhanced wages and benefits beyond the $10.10 policy, and they haven’t,” said Kevin Brown, New Jersey State Director of 32BJ Service Employees International Union (SEIU), which represents the skycaps, baggage handlers, airplane cleaners, ticket agents and local security personnel who work at the airport. “Today is Dr. King’s birthday, and were he here today, he would be with us, waling across and sitting down on this bridge.”

The Port Authority emailed a written statement to PolitickerNJ in response to a request for comment about the protest.

“The Port Authority has taken a leading role in seeking higher wages for third-party contract workers employed at the region’s airports, including adoption of a minimum wage policy last year that will bring hourly pay to at least $10.10 on Feb. 1 and a paid holiday for Martin Luther King Day for many of these workers at JFK, Newark Liberty and LaGuardia airports, as well as all other Port Authority facilities,” the statement reads. “Already, the policy has led to a $1 increase per hour for those making less than $9 per hour. The agency also has proposed a revision to include retail and concession workers at our airports under the policy as of April 1, with that proposed amendment currently in a public comment period. Additionally, agency representatives continue to work with our airport partners on related issues of importance to these third-party, non-Port Authority workers with the goal of enhancing safety, security and quality of service at our airports.’’

The view from the Haynes Street Bridge, unlike the violent clashes during the 1965 civil rights march across Edmund Pettus Bridge in Selma, Alabama, was peaceful – no arrests were made at the protest. But on the day when the film Selma, which depicts the iconic march, was nominated for a Best Picture Oscar, one demonstrator felt that the same story continues to be told for many workers around America.

“This is about respect. Monday is the national holiday for Dr. King and we’ve got to work without pay that we’re due for working on a paid holiday,” said Zayid Muhammad, a Newark Airport skycap at Terminal C for nine years. “Not many years ago, there were livable wages at this airport. But this whole period is the great march backwards. The time has come to turn that around.” 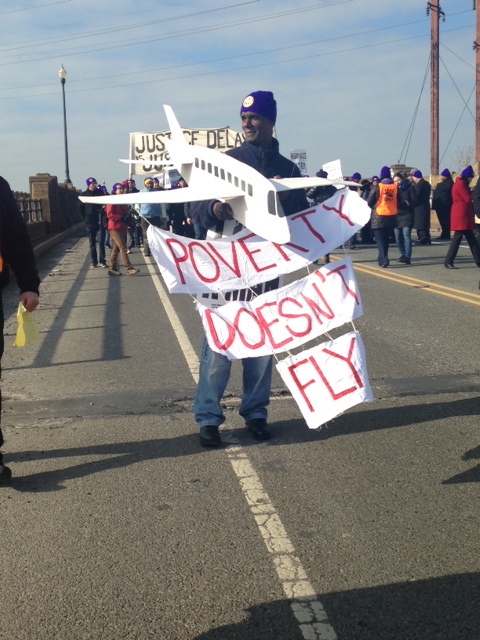