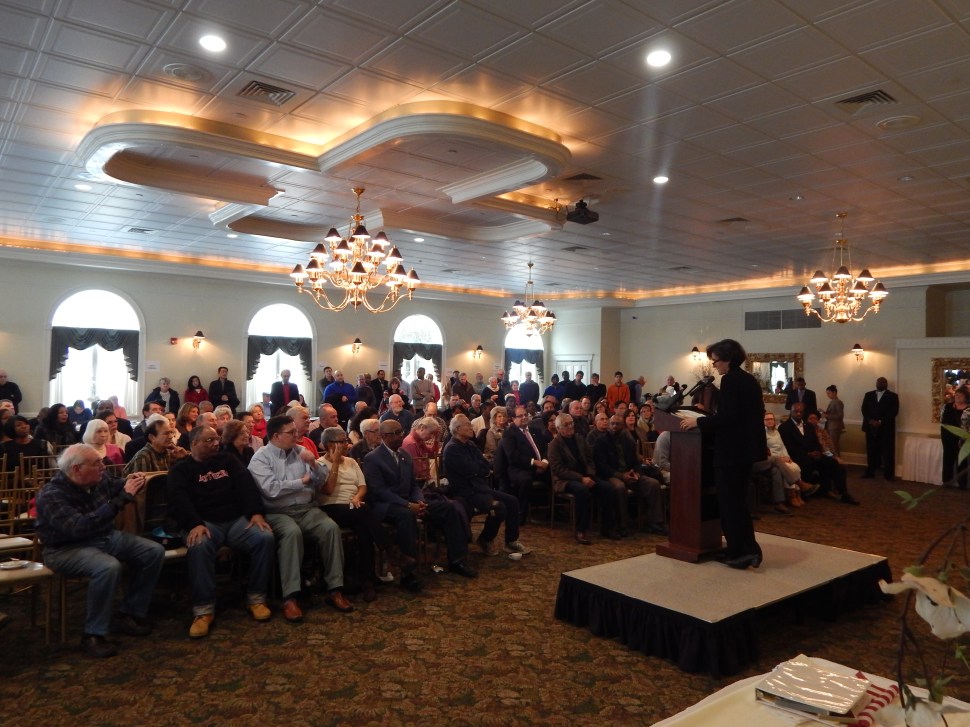 WEST WINDSOR — Insofar as there was ever any question — or, worse, controversy — over who would replace newly-minted U.S. Rep. Bonnie Watson Coleman (D-12) in the 15th legislative district, Mercer County Democrats put the issue finally and unmistakably to rest this morning, presenting the picture of a particularly united political force when they unanimously elected committee chairwoman Liz Muoio to serve as successor to New Jersey’s first African American congresswoman.

Around a hundred Central Jersey Democrats slogged it through early morning slush on Saturday to attend the party’s special convention at the Mercer Oaks Golf Course, where Muoio was officially tapped to fill Watson Coleman’s recently-vacated Assembly seat. Lawmakers and elected officials from around the district — which includes parts of Mercer and Hunterdon Counties — came out in support, praising the candidate for her leadership and expertise. 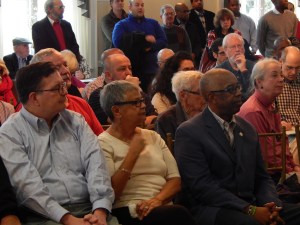 Hughes, Watson Coleman, and Jackson listen on as Muoio is introduced.

“The one thing about Liz is she’s been so instrumental in getting all of us elected,” Watson Coleman, who is the first African American female to be elected to congress in New Jersey, told PolitickerNJ after giving a few brief remarks at the podium. “She lives in the 15th elected district, and she knows it very well. Now on top of that she’s a strong progressive: women’s rights, voting rights, equal rights, middle class values, unions. All those things that are very important and distinguish Democrats and Republicans. So she’s already there.”

“We’re just delighted that Bonnie is in Washington, and of course very, very pleased that Liz will be joining us in the fighting fifteenth,” concurred state Senator Shirley Turner (D-15). “She’s going to hit the ground running, and she’s going to bring all of her leadership skills as well as her expertise on the issues that matter most. We have huge challenges in this state, and especially in this district, and I think Liz is well-prepared to tackle those challenges.”

A resident of Pennington, Muoio has spent years working in Mercer County politics, serving on the Pennington Borough Council from 1998 through 2001 and on the Mercer County Freeholder Board from 2000 to 2006. Last year, as chairwoman of the county’s Democratic Committee, where she’s served since 2010, she helped lead Watson Coleman to victory over Republican opponent Aelita Eck in the Democrat’s 12th congressional district race. 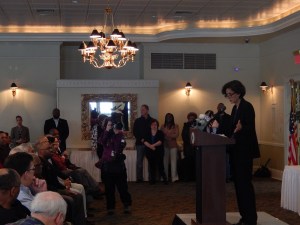 Muoio thanks her predecessor, Watson Coleman.

Mercer County Democrats agree that the new Assemblywoman faces a decidedly daunting task in following in the footsteps of Watson Coleman, a veteran state lawmaker and revered progressive leader who is the daughter of former Assemblyman John Watson, also a legend in Trenton political circles. Watson Coleman was inducted into the 114th congress earlier this month, at a swearing-in ceremony in Washington that supporters endured similarly snowy conditions to attend.

“My parents didn’t raise a fool, so I know enough to know that no one could ever hope to fill your shoes,” Muoio, addressing the congresswoman, said during her own remarks at the podium. “But I will strive match your commitment to the towns and people of this district that we both love, and the Democratic values that we all hold dear.”

Indeed, Mercer County Democrats might have presented a unified front today, but the weeks and months that led up to the swearing-in ceremony this morning did not come without a few road bumps. Muoio’s appointment marks the conclusion of a months-long search for an appropriate successor to Watson Coleman, one that did, at times, generate controversy and tension between members within the party — including its Democratic leaders, Mercer County Executive Brian Hughes and Trenton Mayor Eric Jackson. 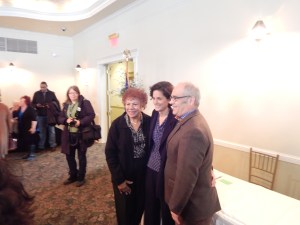 As PolitickerNJ reported, the race to replace Watson Coleman early on resulted in a rift between members of the party, as some lined up in support of Muoio, who emerged a frontrunner in the search before even throwing her name into the ring, while others jumped behind Mercer County Freeholder Sam Frisby, who launched an exploratory campaign to gauge interest in a run back in November. That rift quickly reached the upper echelons of the party, however, and was said to have put some pressure on the relationship between its newly-acquainted leaders, as Hughes backed Muoio while Jackson backed Frisby.

The tension, at the time, was undeniable: when prodded by PolitickerNJ on the dilemma, Hughes expressed some skepticism over Jackson’s decision to back his own candidate as well as the legitimacy of Frisby’s support in his home city, comments which led some sources to condemn quietly what they called Hughes’ uncharacteristic “county boss-like” approach to the situation.

Ultimately, Muoio seemed to receive the strongest backing, amassing the endorsements of every Mercer County mayor in the district except for Trenton.

But if the search over Watson Coleman’s replacement ever generated any infighting among members of the party, there were certainly no remnants of it today, as all came together to lift Muoio up into her new position. That was just as true for the group as a whole as it was for Hughes and Jackson, who threw their arms around each other as evidence of the strength of their relationship when pressed on the issue. 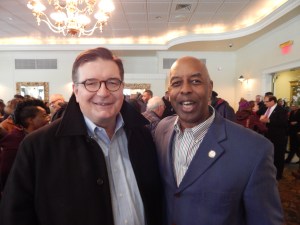 “I don’t know, he called me every other day, I called him between those every other days. And we said, ‘how are we getting this to work out?’ And we figure it out every time,” Jackson laughed, with Hughes concurring. “That’s all the stuff that folks want us to think, but we’re talking every week about how to move this city forward.”

Hughes, a longtime friend of Muoio’s (Muoio gave up her seat on the Freeholder Board in 2008 to join Hughes’ administration as Director of Economic Development and Sustainability), agreed, saying the two have made a point “not to let politics get in the way of policy.”

Hughes, who’s up for re-election himself this year, later dumped even more praise onto the new Assemblywoman, predicting for her a future full of higher, statewide callings.

“She is someone with experience, excitement, relative youth, who has the possibility of being Lieutenant Governor or even Governor of this great state,” he said.

Even Frisby, who announced he’d be withdrawing his name from consideration in the search just a few weeks ago, told PolitickerNJ he harbors no hard feelings. The Trenton YMCA CEO said he’s ultimately happy with the outcome, and celebrated Muoio as a “great” candidate and, as a woman, a necessary addition to the state Assembly, which saw three of its female members depart their posts this year.

“One of the things that people forget when we talk about the state legislature is we lost three women in the past election,” he said. “And so I think Liz will speak well for women, she’ll do well for our district, but that caucus we also wanted to make sure was bolstered as well.” 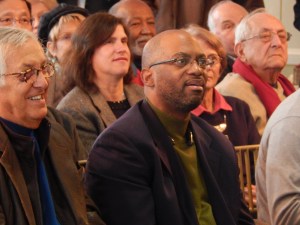 He did, however, suggest the process put some strain on the party, explaining he decided to step aside after seeing the problems two opposing candidacies might have created.

“I began to look at it, and as I began to talk to people on the ground I really felt like the party was getting fractured here,” Frisby said. “People were being pulled one way or the other, and I understand that is the process of politics, but I didn’t want to be the people who starts fissures in our party. I wanted to figure out how to build it, grow it, bond it together, and they’ll be other opportunities for me.”

Frisby said he is excited to have been recently accepted into a Master’s program at Springfield College in Massachusetts, the same one the late U.S. Rep. Donald Payne (D-10) graduated from in the 1960s.

Politicos from all over the district attended the convention. Hunterdon County Democratic Chairwoman Arlene Quiñones Perez was there to help introduce Watson Coleman along with Mercer County Vice Chair Dan Smith, as was former West Windsor Councilman Kamal Khanna, who withdrew his candidacy for the LD15 seat shortly after announcing it back in December. 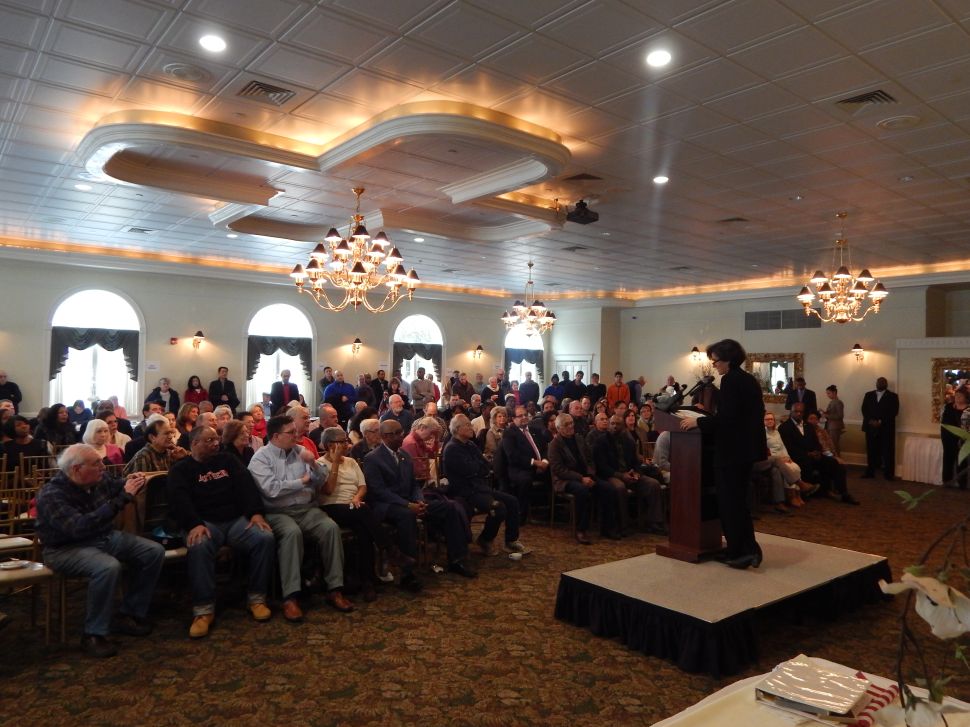