“Here is a famous quote about skeletons.” –Matt Ringler

Once upon a time this guy inherited a dead body. He did the most natural thing: stripped away all of the muscle and skin tissue and fluids until what he had was a loosely connected set of bones. Doing all of that was a lot of work. He was supposed to be building a shelf while he was decomposing the body but he really overestimated his abilities to multitask. Since his first option for a display spot wasn’t ready, he did the next logical thing. He put the skeleton in his closet. It was only supposed to be for a few days until he could finish his carpentry work but then life happened and the skeleton stayed in his closet until he died. One of his relatives was going through his things to find something valuable and discovered the strange heirloom. He thought: “My uncle must have had a lot of secrets.” That is how memes are born. Four hundred years later, MTV incorporated this idea into the greatest reality show of all time: Real World. We’ve been waiting for the skeleton people to show up. They are about to be here but at the front door and not in the closet.

This episode is called Blast from the Past. It is named after a hilarious movie where Brendan Fraser gets stuck in a bomb shelter with Christopher Walken for thirty years and when he gets out, Alicia Silverstone steals his baseball cards. The moral: don’t let any new people into your home. Same goes for the Real World.

Bruno wants to prank the “dirty girls” in the house so he fills up a pot with cold and dumps it on Sylvia in a warm shower. The girls might be dirty because any time they are trying to bathe somebody throws cold on them. That would make me stop cleaning myself up. Sylvia is still attracted to Bruno even though Bruno has done his forearm-headlock hammer kiss to nine-tenths of the women in the West Loop area of Chicago, Illinois. Even the producers want to know why Sylvia is flirty with him again. I get it though. Some people want to be kissed like they mean it and some people want to be kissed like they are getting their neck and spine adjusted at a chiropractor’s office.

Everyone goes out to the rooftop bar, even though it sounds like they are getting charged double for every drink because nobody has any money anymore. I always thought they went to clubs that would give them free drinks in exchange for having lots of cameras around. Perhaps I was wrong or perhaps this bar has the most amount of girls who are not “camera shy,” which is the main thing the guys and Nicole aka The Wolf Pack look for when they rage out. Tony finds a girl so not camera shy that he cannot stand after one of her lap dances and he falls off a couch. Nicole brings a girl home and says “kissing is my talking.” Bonus points to her because my kissing role model, Catwoman in Batman Returns, said “a kiss can be deadly if you mean it,” so that’s the realest talk there is.

Because nobody has any money, they all have to get jobs. The jobs range from bartender to barback to server at different spots around the city. An older gentleman asks to squeeze Nicole’s bicep. This is not appropriate but I am not worried about Nicole because she could very clearly rip this man in half if she felt like it. Everyone else gets off work and goes to the bar that Sylvia is working at. Bruno, who has hooked up with Sylvia, then picked up a girl in front of her, then brought that girl home to the house he shares with Sylvia, then hooked up with Sylvia again, has Carla meet him at Sylvia’s job. Then he brings Carla back to the house while Sylvia cries in the confessional. Not cool, Bruno.

The next day the roommates are counting bear head busts on the wall. There are nine statues but only seven of them. That must mean other people are going to show up. The doorbell rings and they all jump up. It’s just Tony. Total fake-out.

The roommates are going to go out together again. Sylvia wants to forget about Bruno. She puts on a white dress that probably cost the production team a few stacks in blurry censored effects and Jason calls her the Mexican Marilyn Monroe, which is actually an on-point comparison Seven Year Itch-wise. Bonus points. The only problem is that Bruno is not going with them. He has a date with Carla. Sylvia continues to put on a brave face and tells Bruno she’s happy he found a girl he likes. Bruno tells her “you’re not alone with this,” which is another amazing Bruno trick to make it feel like he is very burdened by kissing every woman whose vertebrae need alignment.

The roommates on the other hand get sooooooo drunk. Tony still has no money so Sylvia has to pay his tab. Then she flips out on him. Nicole carries him into the house where Sylvia continues to scream at him in English and Tony screams back in Heineken. Bruno gets home from his date after the fight. He’s decided after all the back and forth that Carla is the one for him. Bruno goes to check on Sylvia and she tells him about Tony not paying the tab. Bruno calls Tony selfish which is like the pot calling the kettle long distance and collect. The next day, Sylvia and Tony make up. Tony forgot he ordered one thousand shots of Jameson and apologized. Sylvia gets called into a two-hour production interview which is a huge setup to get her to talk about how she’s going to turn things around and feel better about herself. Meanwhile, a skeleton comes knocking at the front door of the house.

Because Sylvia isn’t there when Alicia shows up, the roommates don’t know if she is a friend of Sylvia’s or an enemy. All they know is that she has a suitcase and says the producers are bringing her a bed. Madison is super nice to the new girl while the rest of the house warily circle around her like skeptical buzzards. Alicia says she’s Sylvia’s boss and begins to tell stories about how Sylvia is super messy at home and how she sleeps with everyone’s boyfriends. V knows something is up and goes into war mode. There is no person I would rather have on my side in war than V. I pick V over Rambo. V over Eric Bana in Black Hawk Down. There’s also not another person who I would less like to go to war against. Nicole is initially flirty with Alicia but she backs off as well. Everyone gets tight on Madison, who is very friendly to the skeleton. V tells Alicia she doesn’t like her. She tells her that her bed is in the garbage and also on the floor because that’s where dogs sleep. V throws all of Alicia’s sheets over the balcony onto the ground. V tells the camera that if MTV is doing this to her right now, they DO NOT know what they are in for. V picks up the production phone to call the producer to tell them that this is the first episode of Real World where somebody gets killed. None of this is mature, appropriate behavior but I am team “current houseguest.” I don’t like to see people get bullied or ostracized but the current houseguests didn’t know about the twist. The skeletons do, they know they’re going into a situation with somebody who doesn’t like them. That’s some twisted motivation right there. In a situation like this, you need a V to protect the throne. V is the King Slayer.

As it dawns on the rest of the houseguests that they are probably going to have people from their past show up, nobody knows for sure if Alicia is a friend or not. The girls get on Madison for being polite to her and goad her into throwing Alicia’s mattress off the balcony. Jason steps in and tells her to think for herself. Bonus points to Jason for maintaining a level-head this week and not destroying a mattress. That comes off your deposit. Sylvia’s interview ends and she walks in the door. Everybody is holding their breath. She walks to the backyard and sees Alicia. Ambush complete. Not friends! Not friends! Skeletons! It has begun. 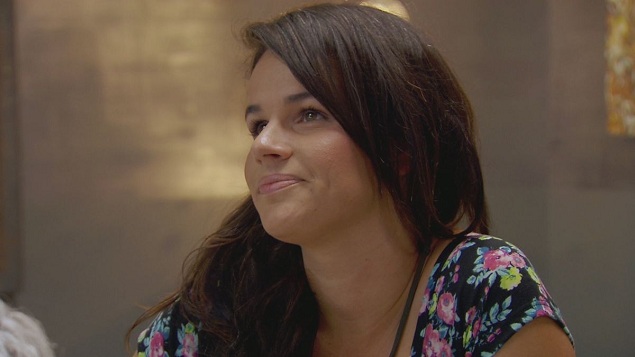