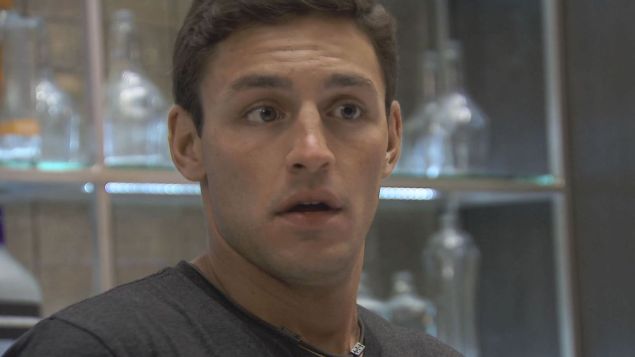 ​Can you smell all the dirty laundry about to get aired out? (MTV.com)

A few years ago, a friend of mine asked what my idea of “success” is. I didn’t have to think about it because I’ve always known the answer to this question. “I’d like to be able to never have to wear the same pair of socks twice. Put them on once and then throw them out.”

He thought about my response for a couple of seconds. “Yeah but you could do that now if you really wanted to,” he said.

Dirty laundry sucks. It is the reason we feel comfortable leaving unclean clothes lying unguarded around the Laundromat, like who is going to want to touch a pile of stank Nike Swingman throwback jerseys? Maybe someone will steal ALL my crusty stuff and then not only can I skip laundry but also buy a whole new wardrobe. But then everything gets clean so you rush back there to get to the drier before it goes off because yeah, maybe someone does want to jack these washed Tommy Hilfiger t-shirts. They’re practically store-bought. Metaphorical dirty laundry is even grosser than repeatedly worn socks. And the cast members of the Real World do not like it when their dirt is put out into the open by other people. It is only okay if they do it themselves. In front of cameras. On television. Know the rules, you interloper.

When we last left Sylvia and Skeleton Alicia, they were arguing in the backyard with all the roommates watching. Even though they want to see Sylvia tear this girl apart, they decide to give them space to talk. Because if a human being is going to get ripped in half, it can get messy and that only leads to more laundry. The talk doesn’t get very far. Later on, Bruno gives Sylvia a wet willy which I would think is much more preferable then him kissing you with the force of a thousand bicep curls. Sylvia admits that she did sleep with Alicia’s best friend’s boyfriend but it was only because she didn’t know it was the best friend’s boyfriend. Legally, if you ask someone “are you my boss’s friend’s boyfriend” they can’t lie to you before you have sex otherwise it’s entrapment but Sylvia probably forgot to ask because she was convinced that Skeleton Alicia couldn’t possibly have any friends anyway and you can’t be the boyfriend to someone who doesn’t exist.

Madison continues to be nice to Skeleton Alicia even though everyone has made it clear that the Skeleton is not welcome at the house. But Madison does not concern herself with such mundane details like what every single other person she has to live with wants. She can relate to coming into the house as an outcast and she feels bad that Alicia has nobody on her side. So Madison takes Alicia to the place where Madison works with Sylvia and introduces Alicia to their current boss. This gives Alicia the opportunity to tell the current boss how she, as Sylvia’s old boss taught her everything she knows about bartending and Real Worlding. Back at the house, the roommates hope that Madison and Alicia get lost and don’t come back. V tries to block the door but it fails. The drunks make their way back into the house.

The next night, Skeleton Alicia wants a second chance so she goes out with the Wolfpack. Sylvia is not there because she has to work and the roommates actually warm up to the Skeleton a little bit. But Sylvia talks to her boss and he tells her how Skeleton Alicia is taking credit for everything Sylvia does behind the bar and in front of the camera. That is serious drama because if someone you hate says they made you who you are today then you would also have to hate yourself and that would cause your body to decompose rapidly like that dead animal in the True Blood opening credits. Sylvia gets off work, tracks down the group and rips into Alicia. Back at the house, Madison admits that Alicia said those things to their boss. V explains to Madison why Alicia is so shady. She knowingly came into the house to mess with Sylvia. And that is extra messed up—more messed up than choosing to mess with someone you’ve just met because you’re drunk and don’t like them. Madison finally sees the error in her ways. However, Alicia never made it back to the house. She is missing. V calls her Felicia, which is hilarious because she’s been living there for several days now and V clearly has not even taken the time to learn her actual name, that’s how much V hates Skeletons. V hates Skeletons more than Ogre hates nerds. V hates Skeletons more than Jake Blues hates Illinois Nazis. Sylvia calls the producer to make sure Skeleton Alicia is not dead. She isn’t. She shows up the next day after staying the night in a hotel and apologizes to Sylvia for saying all the things she said. This is not how the Skeleton thought this was going to go. How she thought it was going to go, I have absolutely no fucking clue. The next morning, she leaves a note and is gone without waking anyone up. That’s how you turn a Skeleton into a ghost.

With Skeleton Alicia’s appearance the rest of the roommates try to figure out who is going to show up next. Tony has several potential Skeletons. His most recent girlfriend, Elizabeth, had to put their relationship on hold so that Tony could go on Real World and fall for every girl who is his type, which is every girl. Tony’s other ex-girlfriend Alyssa is screencapped as “Tony’s stalker” (bonus points to the continuously solid screen capping team yet again) and she once chased a girl down the street with a brick for talking to Tony. Tony invites his stalker to come visit, which really makes the “stalker” designation seem unfair but cautions her not to come up at the same time as Elizabeth. He says this while Madison is practically sitting on his lap. This is why Tony is in the running for most entertaining character on reality tv right now. He can’t possibly think any of this is a good idea, yet he cares not.

Jason has a baby on the way but he hasn’t told anyone except the Wolfpack, which means he hasn’t told any of the girls except for Nicole. Jason tells Bruno he has a thing for Sylvia. Bruno doesn’t really react to this news because Bruno has rotated more women in Chicago than Roxie Hart and Velma Kelly. Jason and Nicole work together except Jason is a barback so he has to clean up while Nicole gets to drink and bartend. They get into a fight over garbage bags. Nicole pronounces it “gah-baj” because Nicole is awesome. Tony makes a comment about her being a lesbian in front of their co-workers. This fight spills all the way back to the house. Jason comes at Nicole on some misogyny bullshit about her acting like a guy but not being one and she hits him back with a “you have a daughter on the way, that’s how you’re going to talk to a woman?” The house hears that Jason has a kid on the way. Jason and Nicole each accuse the other of airing their dirty laundry but then Jason and Nicole both realize they said things they shouldn’t have and apologize. Wolfpack saved.

With Alicia gone, the group has a family dinner together. TEAM CURRENT HOUSEGUEST. Then they all go out. Jason and Sylvia grind harder than Eric Nies on the dance floor. Madison is dancing with some random guy. You can tell he is a random guy because he is screencapped as “Random Guy.” Tony is watching her and getting jealous. Madison brings Tony over and he has a quick little back and forth with the Random Guy. Sylvia comes over and tells Tony not to be a jellyfish. Being a jellyfish is a bad thing because sometimes they can sting you and then you have to get peed on. Actually, maybe the jellyfish isn’t the bad thing to be in that situation. Tony can’t have Madison and every girl in Chicago that is his type which is every girl in Chicago, and two ex-girlfriends at home. Speaking of the ex’s, when Tony gets home he calls Elizabeth drunk and tells her how much he misses her. Madison comes into the room and sits on his lap while he’s talking to his ex-maybe not ex-ex-girlfriend and starts talking to her, too. Liz hangs up on them, then calls back and Madison lies saying Tony is sick and that she is Sylvia and they get off the phone again. Seconds later, she makes out with Tony. The Producer asks why Madison keeps ending up back with Tony and she says, “the heart wants what it wants,” which is a great Selena Gomez song. Madison and Tony do it. “It” as in sex. Madison says she’s never slept with anyone after only two weeks but in the house, two weeks feels like a lifetime. I believe that because one time I went on a trip to Miami with a group of friends for a week and when I got home, I was super lonely and had to watch all five Rocky movies to feel better. Tony leaves Mad’s room wearing her little shorts so everyone knows that their “it” got did. The whole house is buzzing about the sex when we see someone walking up the block. It is the next Skeleton. It is Tony’s ex-current-ex-girlfriend. She has shown up about six hours after he has slept with Madison. She rings the doorbell. They gather around their camera monitor to try to see who it is. Tony looks confused and says “wait” about forty times like: “Wait, wait, wait, wait, wait, wait, wait, wait, wait, wait, wait….” Tony’s Skeleton episode is going to kill. At this point, the laundry is all dirty. 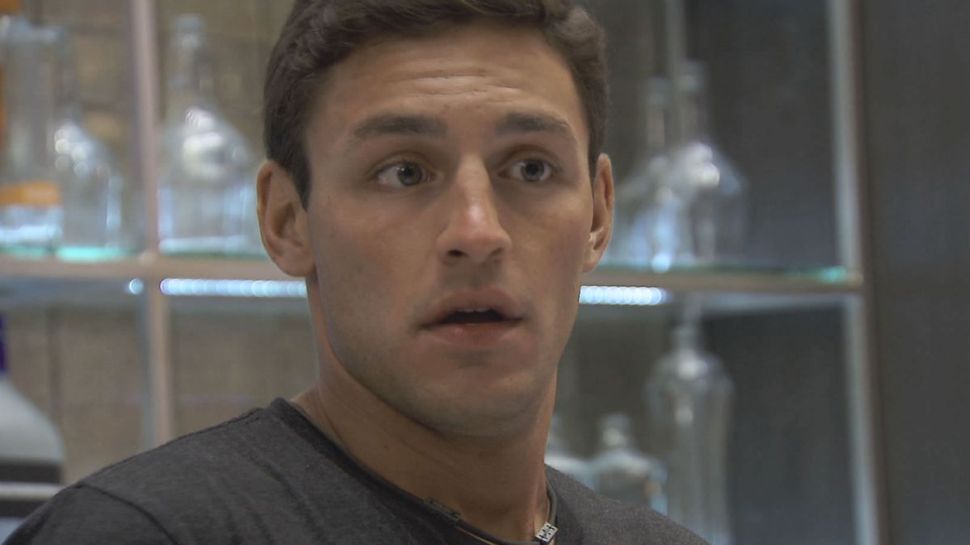