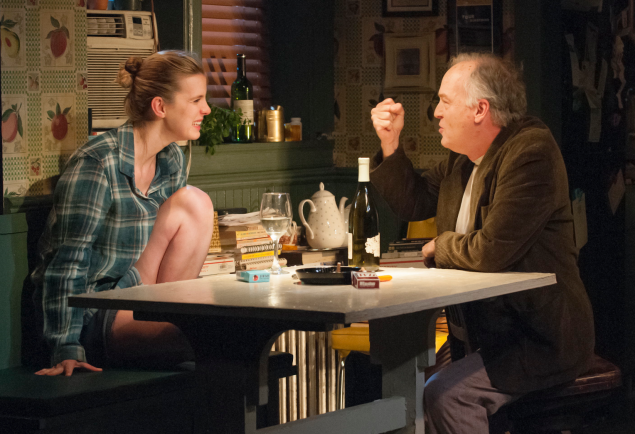 Betty Gilpin and Reed Birney star in I’m Gonna Pray For You So Hard.

Halley Feiffer is an actress-playwright who has appeared in and written a few TV shows and Off-Broadway plays, and received some encouraging reviews for them. She also co-wrote and starred in a terrible movie comedy called He’s Way More Famous Than You, for which she’s earned forgiveness. She’s still a writer with a lot of promise who is obviously ready for bigger acceptance and louder applause.

But more importantly for our immediate concerns, she’s the daughter of a very accomplished father, the excellent, witty and accomplished Jules Feiffer. One can only imagine the internecine conflicts, mixed emotions and creative challenges resulting from two writers, father and daughter, in the same family. For all I know, they are supportive, happy, proud of each other, and a perfect team at the Thanksgiving table. But if this provocative, sensitive, shocking and often very unsettling two-hander produced by the Atlantic Theater Co. is as autobiographical as it seems to an audience, there’s reason for concern about the author’s relationship with her father, and the rest of the world at large. As polished and probing as the writing is, and as electrifying as Reed Birney and Betty Gilpin are for 90 intermission-less minutes, it’s the non-stop fury of what seems like a psychological house cleaning, getting everything off the author’s chest in a searing burst of therapy that left me shaking.

Here is a father, famous and brilliant and brutal, taking out his disillusionments, failures, weaknesses disguised as strengths, and paternal impotence on a daughter who forgives him for everything in a desperate need for love. David is a Jewish sadist from Sheepshead Bay whose own father kicked him out as a teenager because he lived on plays and books and dreams instead of making a living at a respectable profession. He couldn’t live up to his father’s expectations, so David took a subway to Manhattan, and stood terrified at 17 in the middle of Times Square, alone and nowhere to go. As he tells the story in an exhausting monologue that passes for a First Act, he found his favorite playwright listed in the phone book and ended up moving into a luxury Greenwich Village with the man, a notorious homosexual who never made a pass at him, and became his assistant. What else could he do? He had no friends. In the intervening years, he changed his name to something more generic, less Jewish and better looking in the get-famous business when opening night reviews were read aloud at Sardi’s, learning to channel his growing cynicism and life’s accumulated rage into his plays, winning a Pulitzer and two Tonys and losing everyone who ever loved him in the process.

It’s a hard act to follow, but daughter Ella worships him. It’s the night she has just opened in an experimental production of The Seagull, but in a minor role, not Masha—a role she lost to another inferior but more aggressive actress. In her tacky Upper West Side apartment decorated with old Playbills, her father drops in and reads the rave reviews, but not for Ella’s performance—berating her, shaming her, blaming her for not living up to her full potential, accusing her of being a second-rate artist and reducing her to throwing up in the wastebasket, all the time drinking her wine, tempting her with drugs, and plying her with cocaine. This is a harrowing mirror to the tortured soul of a great writer who lost his own sense of humanity in the spotlight, destroying the lives of two wives and working lustily to wreck what’s left of his daughter’s blind affection, which he clearly does not deserve.

It’s a powerful, center-stage tour de force by Reed Birney that is the major reason to see this play under any circumstances. He brilliantly and cogently dissects the vicious pomposity of pretentious theater critics. He waxes ecstatic about the superiority of New York in the 1950s, about early Sondheim and Mary Martin and Bert Lahr in Waiting for Godot. He launches into a tirade about his resentment of his lesbian sister “who looked like Karl Malden in drag.” He smokes furiously and pounces on his consonants like banging a snow shovel against a sheet of winter ice. Mr. Birney is one of the unsung, unspoken heroes of contemporary New York theater who can do just about anything. When last seen, he was the most poised and perfect cross-dresser on Broadway in Harvey Fierstein’s wonderful, underrated opus Casa Valentina, in which he was nominated for—and should have won—a Tony award for quietly stealing the show in pearls and a Chanel suit.

Now he tears through Ms. Feiffer’s play like music in a tenement symphony, his voice rising and falling in crescendos, building into explosions of hate and joy, devouring and regurgitating life while demanding so much from everyone that they can never live up to the pressure. It’s a big, bold, operatic performance, a Shubert Alley Lear, played to the hilt.

I would watch Mr. Birney play anything, but it must be said that Ms. Gilpin, a bright new light piercing the off-Broadway shadows on her way to the Great White Way, manages to keep up with him throughout, going the distance from abused and needy child to a monster who has been well trained by an expert. Thanks to great acting, the story isn’t just an intergenerational human tragedy, but also a tense thriller with a strong emotional line between the two characters. Is it a perfect play? Not exactly. For me, the play ends when the father takes out his final act of annihilation, reducing his daughter to shards of quivering self-doubt and the drive to become a stronger woman than the girl he left behind. But after a brief set change, Ms. Feiffer adds a disturbing coda that shows what happened in the five years following the stormy first scene. Ella becomes a drunken, drug-addled version of her father. On the triumphant opening of the one-woman play about her life he inspired her to write and star in, it is now her turn for revenge. David comes around to her dressing room with flowers, a gnarled Xerox of his former self—a stroke victim with one good arm, consumed with guilt and badly in need of forgiveness. But instead of redemption, she kicks him down the steps and showers him with champagne and vitriol.

Ella now has the whip hand at last, and there is no evidence that she will ever use it wisely or well. The audience was almost too devastated to give the two actors a well-deserved standing ovation. I overheard, “He got what he deserved,” and, “Be careful what you wish for or you might get it.” In my opinion, this heartless splay of spleen and malice weakens the impact, but not enough to keep it from being one of the best plays I’ve seen this season. 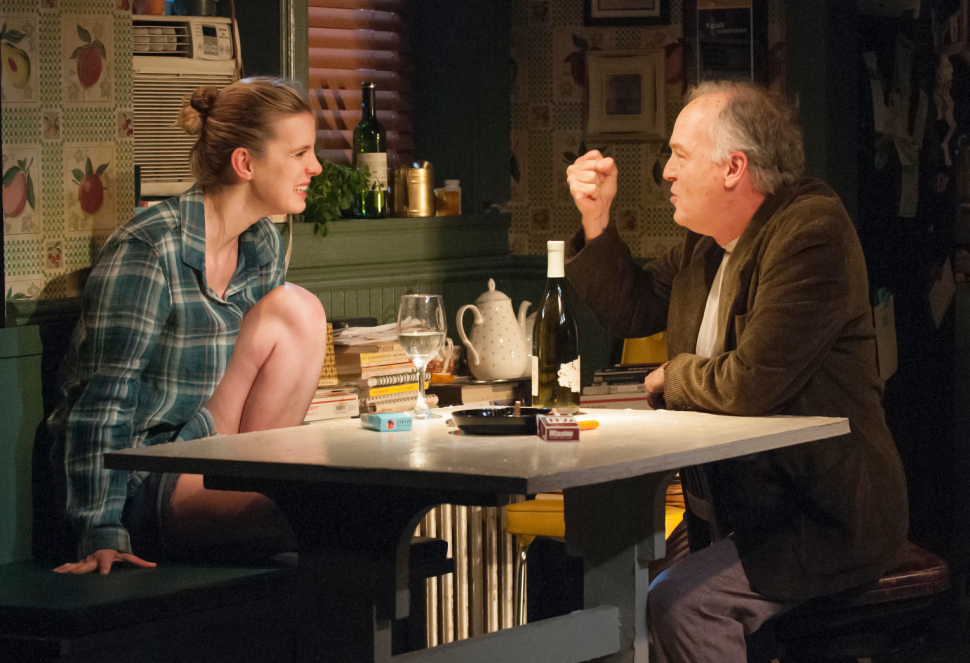