Senator Robert Littell and one of the most conservative members of the Legislaure, will leave the assembly to serve as administrator of Franklin Borough.

According to the Herald News, McHose appeared today at the Franklin Borough reorganization meeting.

McHose brings almost 20 years of state government experience along with almost eight years of federal government service, as well as an enthusiasm for a bright period for the small hamlet in eastern Sussex County. Most recently, she has served as the Assemblywoman for the 24th legislative district that encompasses 36 municipalities including all of Sussex County, eleven towns in Northern Warren County and Mt. Olive in Morris County.

McHose resides in Franklin with her husband Morgan and their three children. 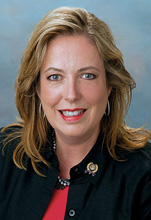