Like many great episodes of Revenge, last night we were drowning in drama even before the title sequence. We learn that Malcolm recruited David for his impressive (and unearned) terrorist resume and saved his life from Conrad, who was going to have him killed. The only catch was that Black got to stab him while forcing him into a life of crime and isolation. Prison sounds pretty good in comparison.

David seemingly reconciles with Victoria, who as a credit to Madeleine Stowe’s performance, has softened into an almost relatable character after the death of her son last week. But David knows better and wants to meet later “at their old spot,” because it’s a lighthouse and he’s going to push her off. And after dedicating her life to destroying V, Emily of all people is the one who calls off the murder. Really girl, after all this now you don’t want to kill her? Come on. If you don’t want her dead, what do you want?

She wants to run away together, which is one of many things Em says to David that normal people say when they’re dating. I suppose that when a father and daughter reunite after being kept apart a lifetime, and then have to leave town because another person wants them dead, the possibility of sounding like lovers is the least of their concerns.

Louise is unraveling as fast as Emily and David’s plan to flee The Hamptons. After a few charmingly calm weeks, her crazy has been reprised due to the unexpected arrival of her politician brother Lyman Ellis, who just seems to be campaigning for the breakup of Lolan. Nolan enlists Em for a farewell takedown of Lyman. Instead, Emily uses this as a chance to assess Louise.

Malcolm Black finds Jack and knows he was Kate’s partner, and though he’s suspicious he doesn’t kill him. Instead, Black vaguely threatens baby Carl through the window. Did anyone else forget that Jack cared about his kid? It feels like he hasn’t seen him in months, but hey, being an incompetent cop can be time consuming.

Ben continues to chase Emily to such a degree that he seems like a stalker and adult virgin at the same time. Like Jack, we’ve come to know Ben as a really dumb cop who likes complicated babes. They’re so incompetent that it doesn’t dawn on either of them that if the police chief is missing, it’s probably not good. Instead of getting worried or suspicious, Ben just emotionally eats french fries and wonders if Alvarez is mad at him.

Once again, Emily proves to be a better detective than both of these boneheads combined. When Louise lashes out at one of her delusions (hi Hennesy!), Emily discovers that her family has been drugging her. Em is first tipped of to this when she finds one of Louise’s Xanax, which did not look like Xanax. This all begs the question, how does Emily know what Xanax looks like? If she ever took one, she probably would be too busy chilling out on a beach to dedicate her life to vengeance.

Ben and Jack continue their neck and neck competition for worst cop ever, and Margaux is not pleased. Since Daniel’s case was closed, she’s been on a hormone and grief filled rampage for justice. The lack of investigation finally make’s sense when Marg discovers that Ben has babe blinders on, after she overhears him calling Emily for a date. But she can’t take this scandal to press yet, she has to faint fabulously first. Luckily baby Dangaux is okay, and they just tell her to do more yoga.

It seems like Ben and Marg may have the potential to be more than friends. It might be gross to consider a possible couple nickname like Barg, but the two have a lot in common. They’re both attractive, slightly annoying supporting characters who, thanks to Victoria’s big mouth and Ben’s eavesdropping, now have ton of Clarke family secrets to bond over. Unless he has some sort of fetish for double lives, Ben is probably over Emily now after learning V’s version of the truth.

Is it possible that Victoria suspected that David might kill her at the lighthouse and told Margaux everything as some sort of insurance policy? Though Victoria hasn’t done anything awful since Daniel’s death, it’s still hard to believe she’d volunteer all this information without any self-interest.

Lucky for V, David is probably wishing he tried to kill Jack instead, after he highjacks his plan to kill Malcolm Black. Jack goes to the police with David’s evidence, but can’t stick the landing. It’s clear now more than ever that Black has men on the inside, when he’s turned over to the FBI and immediately released. The fact that his daughter worked for the feds probably should’ve tipped Jack off to some sort of corruption, but for someone who continues to get screwed by it, he really believes in the system. It would be more adorable if it wasn’t so life threatening.

Whether it’s Black or David, if they’re going to kill off Jack they better do it soon, so he‘ll stop ruining everything. We’ll mourn the loss of eye candy and a punching bag, but there can’t be a series if everyone is dead. With Jack in charge, that’s where we’re headed.

The episode begins and ends with the lighthouse, where Victoria goes to meet David. But Emily is the one who lured her there, after discovering that Victoria tipped Kate off to her real identity and was responsible for Daniel’s death as a result. Black diffuses this conflict in the creepiest way possible, by hunting them like animals with tranquilizer guns. Well, that’s one way to stop an argument.

Black knows who Emily and Victoria are to David. Since he thinks Kate is still alive, he will likely use them as leverage to get her back. Once Black learns the truth about his daughter, they’re all totally screwed. The only thing that is certain for next week is that waking up in a cage with Victoria will feel like the worst hangover ever. 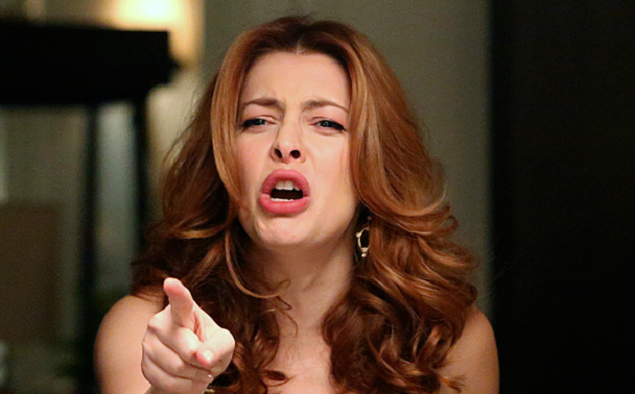