If you feel left out of the whole Twin Peaks phenomenon, we’re here to help! Every week, associate tvDownload editor Vinnie Mancuso attempts to figure out what the hell is going on in this town, while senior editor/Twin Peaks expert Drew Grant answers his questions. This week: ‘Coma.’

So Donna is going undercover, because the new trend in Twin Peaks is to go undercover. Audrey went undercover in a brothel, Donna chose Meals on Wheels. Audrey wins. Anyway, Donna, who looks like she got over her badass chainsmoking phase pretty quickly, takes a nice meal to an old woman, AKA Happy Gilmore’s grandmother, because that’s what Laura Palmer used to do. Joining the old woman is her grandson, who looks less like Adam Sandler and more like a creepy little shit in a tuxedo. The old woman, like most people in the world on any given day, requested NO CREAMED CORN with her meal, but there is creamed corn on her plate. But then there isn’t. Because the grandson is holding the creamed corn. But then he isn’t. Because he’s practicing magic, the old woman says.

Sigh. Is this how we’re doing things now, Twin Peaks?

Anyway, after a couple more moments of child-magic discomfort, the old woman recommends Donna talk to Mr. Smith next door. “J’ai une ame solitaire,” the grandson offers, which translates roughly to “my weird appearance on this show will have zero payoff in the end, probably.”

Agent Cooper (who returns in 2016!) and Sheriff Truman go to question Ronette Pulaski in the hospital. Which mean they are asking questions of a near-comatose crazy person that is only capable of screaming in your face nonsensically. Which is a metaphor for me recapping Twin Peaks. This goes about as well as you would imagine.

At the diner, Andy is hanging up BOB posters when the Log Lady walks in. Real quick, upon further review it looks like Andy was on his knees or something, but the whole thing was much more fun when I thought the Log Lady was nine feet tall. 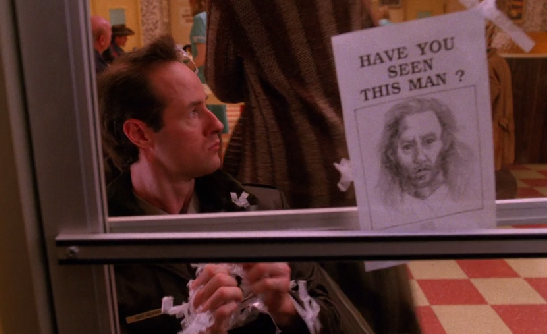 Anyway, the Log Lady’s log has a message for Major Briggs. That message is: “Deliver the message.” Thanks, log. But Major Briggs seems to know exactly that means. We found out later in the episode that the “message” Major Briggs is supposed to deliver is for Agent Cooper. And it’s actually pretty normal. The message the log wanted to send was “Sweet pajamas, Dale Cooper.” Major Briggs and Cooper have a good laugh over that one, and everyone goes to bed.

Just kidding. Don’t you remember how fucking weird this show got all of a sudden? No, the message isn’t even from a talking log, it’s from outer space, because of course it is. Apparently, Major Briggs’ job includes pointing a microphone into other universes, or something. Normally, the only thing they hear back from space is gibberish. But right around the time Cooper got shot, the words “the owls are not what they seem” came through. Then, a few days later, the words “Cooper, Cooper, Cooper.” What could this all mean? I don’t know! I’m going insane! HAHA.

Speaking of insane, Leland Palmer is still insane. He doesn’t do much, just freaks out over one of the BOB wanted posters, but in classic insane Leland fashion. But his freak out is nothing compared to Madison’s freak-out. To be fair, Madison wasn’t looking at a picture of BOB, Madison was watching BOB slither across her living room like the terrifying thing he is. So that happened. Although it’s unclear whether BOB was really there or not. I’d hallucinate too after take #47 of this AWFUL song James made.

In your expert opinion, why do you think the show found it necessary to include an entire three minute song filled with so many meaningful glances?
Oh you mean “Just You (AKA James’ Song)?”

NOTHING WEIRD HERE, YOU GUYS. JUST TWO 1950s playboys off the coast of Italy, giving long, soulful looks to each other over weird Kenny G. sax.

How has Audrey been undercover at a brothel for two whole days without anyone at the brothel noticing she doesn’t belong there (until the end of the episode, that is)?

Dude, you ever been to a brothel? No? Me neither. I’m not sure we even have brothels anymore. They sound fairly quaint, like “opium dens.” I imagine they are dark, and what with the masks and all, you’ve got the whole Eyes Wide Shut thing going on…it just seems like hey, if you want to show up and tie a cherry stem with your tongue, no one is going to be like “SO I SEE HERE YOU HAVE GREAT PEOPLE SKILLS, BUT LOOKING OVER THIS RESUME I NOTICED SEVERAL DISCREPANCIES IN YOUR FORMER EMPLOYMENT TIMELINE, MAINLY THAT YOU ARE THE CHILD OF MY EMPLOYER. I AM SORRY, BUT YOU ARE NOT A SUITABLE CANDIDATE FOR THE POSITION OF MASKED PROSTITUTE!” I mean come on. Bitch knotted a cherry stem with her tongue.
[youtube https://www.youtube.com/watch?v=7rFWZCEYxyU&w=420&h=315]
Do you know how long it took me to learn to do that? Four months! A whole four months till i learned that the trick is to very discreetly spit it out of the side of your mouth while no one is looking, tie it in a knot, and pop that sucker back in your cherry pie hole.

Almost cost me a couple of jobs, too.

I’m going to go out on a limb and say an alien got Lucy pregnant, since turns out Andy is sterile. Confirm, deny, no comment?

Yup. You got it. That note that Cooper got from the Bobby’s dad? It actually said “The owls have Argonauts’ semen,” which, obviously, is a reference to the Trojan war and ejaculate. Trojan = condom brand. Therefore: the owls prove that the alien is not the father, because the night birds actually are extraterrestrial prophylactics in disguise.

I can’t really ask “what the heck is going on?” every week, but I would like to know: What was the general viewer consensus of early season two when it first aired?

Good question! This episode actually had the lowest ratings of the show’s short existence, thus far, getting only 14.4 million viewers. (Though the ratings would dip much, much lower in weeks to come.) I think the name “Windom Earle” gave a lot of people (correct) bad vibes, and they just steered clear. But nothing about this episode strikes me as particularly bad. And David Lynch directed the episode, which is why you get to see cool things like–um–Emory’s weird ice bucket foot fetish job? And Bob crawling across the floor like a monster? And, er…James’s singing?

Okay, bear with me, Vinnie. You’ve only got a couple more episodes until this shit really takes a nosedive. 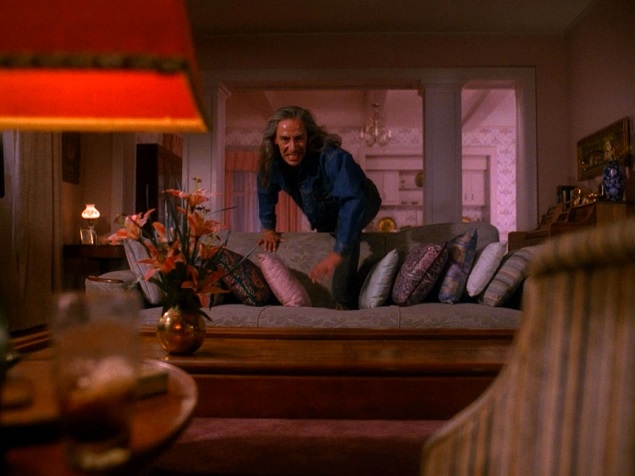