“Just to be clear. We are watching a robot pretending to be human, talking about her robot,” sighs the exasperated human anti-hero of Sorry Robot, Bessie award-winning composer and performer Mike Iveson’s half-baked yet weirdly wonderful world premiere musical now at the New Ohio Theatre as part of PS122’s COIL Festival through January 17th.

And you can’t blame the poor guy, or the audience actually, for being a little confused. Because this is downtown theatre, and it plays by different rules. So, to clarify, Sorry Robot is Iveson’s first attempt at playwriting — which is like talking about Lizzie Borden’s first attempt at wielding an axe, effective but  a little messy. And it actually has human actors playing humanoid personal assistant-type robots.

Iveson himself plays the role of a deeply deadpan “Junius” model robot and another downtown stalwart, Nicky Paraiso, is one called a “Fortnight H6N9”. I kept thinking of Harry Potter’s Nimbus 2000, but these robots find their magic not in quidditch or adolescent angst, but rather in their musical expression, scratchily singing their guts out in Iveson’s quirky and catchy pop expressions of yearning, full of all the chunky, quotidian details of our complicated,contradictory human lives, which they are obsessed with.

The robots’ level of sophistication in this daffy dystopia is epitomized by a built-in quirk for making little gaffs and errors. “Humans are more comfortable with robots that make the occasional mistake. Studies show,” says the intensely passive aggressive Junius. But now, some mad scientist (a tentative Tayna Selvaratnam, who plays three human roles at once for some reason I didn’t quite get), has come up with an evolution in software that will make their hardware softer, more human-y. It’s called getting an “Emotional Upgrade,” a kind of corporate microchip customer service high colonic.

And so, a recently divorced “high ranking detective of the U.S. Justice Department” named Isaac Crownover, (a steady Anthony R. Brown in the relatively thankless role of “our hero”), goes down to Florida to the Hotel Vander Vivian to see a demonstration and assess the new models’ potential benefit or threat. Brown has the toughest role here. He’s onstage the whole time, he says “What?!?” a lot, and basically serves as the straight man to the robots as they express their envy for our humanity. The robots, occasionally with four young women in red shirts and black ties dancing or moving set pieces behind them, demonstrate how deadened we’ve become in comparison to their goofy, but endearingly vulnerable simulacrums of us.

And that seems to be Iveson’s point. The human characters here are insecure and lonely, alternating between their self-soothing ambition and their viciousness. Sort of like Tom Cruise or Keanu Reeves in every movie of theirs in the last couple decades, they are dressed in all black, and are svelte smoothies who are always in control, man. But you kind of don’t buy it. Iveson certainly doesn’t and actually he doesn’t seem to want to be a perfectly macho man. He seems to relish in our flaws and fears. The robot who craves human emotions is an idea that goes all the way back to The Tin Man, and Iveson’s examination of the mechanization of our emotions feels more timely than ever. Especially with Iveson’s flair for whipsmart satire.

He and Paraiso are a match made in avant-garde theatre heaven. They share a “take no prisoners” performance style, confident and brash. Paraiso, who day job is curating The Club performance space at East Fourth Street’s venerable La Mama Theatre, is a veteran of the 1980’s late night improvisory cabarets of downtown legend Jeff Weiss and cut his eye teeth romping behind the piano and tearing into bizarre plot twists with gusto, both on useful display here. He’s since grown into his own face and it has a dignified gravity that works well for his robotic role here, very Downton Abbey wire and metal major domo. But his toothy grimace is still very much in evidence, especially in his caterwauling cri de coeur duet with Iverson, “Emotional Feelings”:

Iveson loves barely sensical wordplay, following in the footsteps of Jabberwocky playwrights like Mac Wellman for whom sound is often more important than sense, but whose characters’ speech is still rife with outrage and outrageous humor. He eats up and spits back out the crunchy inanities of marketing speak as well as New Age platitudes. Both Iverson and Paraiso’s robot characters are dressed by scenic and costume designer Parker Lutz in plaid shirts that match the rug and sort of pathetic athletic shorts, (Iveson’s a shiny Rocky Horror-gold, nice touch), with their middle-aged bellies just begging to be rubbed. They approach a kind of perfection arising out of their imperfections, of voice, of body, but not of heart.

And so it goes with Sorry Robot, which is directed by Will Davis, by the way. It’s kind of an all-over-the-place, loveable mess. The script needs cutting, shaping and discipline, but I would hate for it to lose any of its life-force, its silly glee or fiercely defended fecklessness, in short, it’s wonderfully human touch. 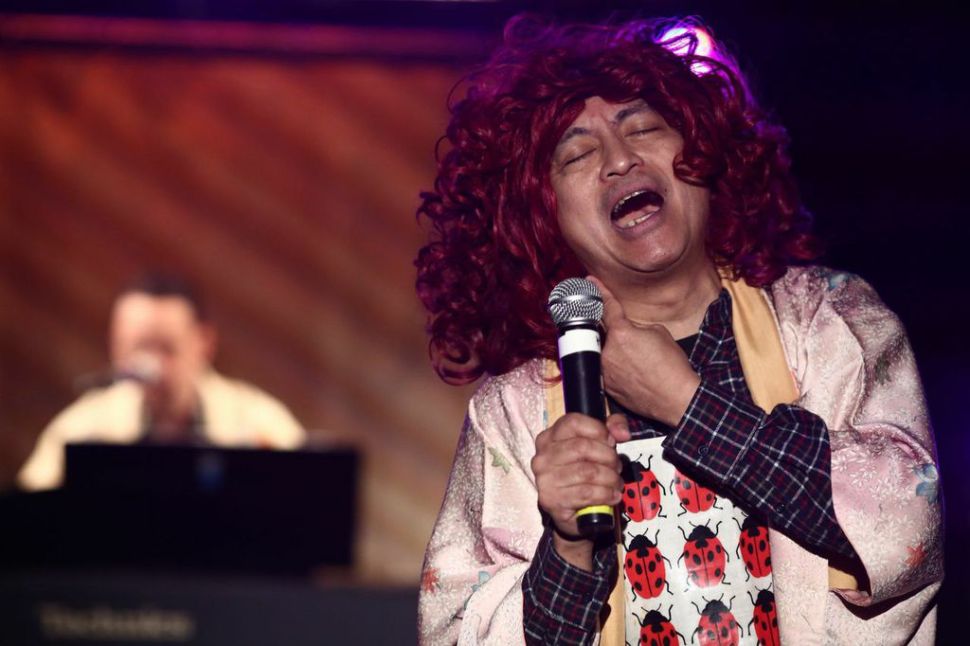