WEST NEW YORK – The announcement on Thursday that West New York Commissioner Ruben Vargas had submitted his resignation, reportedly for personal reasons, combined with the notice that a special commissioners meeting will be held Tuesday morning to name Vargas’ replacement got the collective minds of Hudson County politicos whirring.

The day before Vargas resigned, Gabriel Rodriguez, an ally of West New York Mayor Felix Roque and U.S. Rep. Albio Sires (D-8), a former West New York mayor, was sworn in as commissioner to replace Caridad Rodriguez (no relation), who ascended to the Hudson County Freeholder board.

Another vacant commissioner spot opening almost as soon as the other was filled leads to much speculation about what is exactly about to play out in West New York.

The 50,000-person Hudson County town is already bracing for a political slugfest this spring as Roque tries to hold off his rival, Commissioner Count Wiley, in the 2015 mayoral race to be decided in May.

With one Sires ally now installed on the West New York Board of Commissioners, will the new open spot be filled by an ally of state Sen. Nicholas Sacco (D-32), a Sires rival in Hudson County’s pantheon of power? Or will the Hudson County Democratic Organization (HCDO), now behind the former outlier Roque, find a way to unite its factions behind one candidate?

Roque, reached by PolitickerNJ on Friday afternoon, seemed almost giddy about the change to come on the West New York Board of Commissioners.

“I have somebody, and it’s going to be a beautiful surprise on Tuesday at 10 o’clock [a.m.]. There’s a lot of speculation, and I think it’s fun,” said Roque. “We’re picking somebody who will actually help us unite West New York and the county. We’re aligning all the stars.” 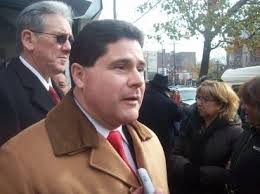