Showtime’s original programming is generally pretty hit-or-miss for me. And even its better shows have a tendency to overstay their welcome: Nurse Jackie, for example, once one of my favorite half hours of television, has become all but a parody of itself. But as it wheels into its fifth season, the Chicago-set tragicomedy Shameless, which returned last night, shows few signs of flagging, and in some ways seems to be just now hitting its stride.

There is a memorable sequence in last night’s season premiere, in which Lip, the second-oldest child in the show’s Gallagher family, rides the El back home from college. As the train makes its way from north to south, the riders change: Fine-suited businessmen with Bluetooth headsets give way to collared shirts and jeans, and they are replaced in turn by dirtier clothes, day-drinking, shifty looks—such that Lip starts to feel self-conscious about the expensive watch his wealthy girlfriend gave him.

Completely wordless, the scene speaks volumes—about class in America, about the way that social strata tend to sit uncomfortably alongside one another, interacting only when necessary, and about the border zones whose existence we are at pains not even to acknowledge.

This is a large part of what makes Shameless such a compelling show. It takes direct aim at those issues that certain pundits have recently derided as “class warfare”—and then it dares you to look away. You don’t have to meet the eyes of strangers on a train, after all, but they’re still a part of your world.

I can’t think of any television show since Roseanne that has even come close to dealing with class and poverty in such an immediate and relatable way (and the Tanners were actually considerably better off than the one-mistake-away-from-homelessness Gallaghers). The trick of Shameless is simply that it consistently treats its poverty-stricken central characters as real people—which would seem to be just the most obvious thing to do, were it not for the failure of almost every show that even touches on the subject of poverty to use the very poor as anything but either figures of fun, cautionary tales, or holy exemplars bearing up nobly under the crushing weight of life.

Instead, the Gallaghers are just ordinary, flawed people who happen to be poor. The show is a comedy, yes, and some of it is very broad, but the poverty of its characters is always the setup, never the punch line. They have fully realized character arcs, and real problems, problems that are certainly not reducible to the fact that they live in a terrible neighborhood and have trouble keeping the lights on and food in the fridge.

The oldest daughter, Fiona, has been dealing for four seasons now with the pressures of being the in-all-but-name parent to her five younger siblings in lieu of their absent mother and transient, alcoholic father, robbing her of any chance at a normal adolescence. After finally cracking under the stress last season, she is now back on her feet and dealing with a much deeper issue, as she starts to come to grips with the fact that, despite her fierce determination not to turn onto her parents, she has inherited her father Frank’s addictive personality. Fiona may not be addicted to booze or pills, but she can’t live without instability and chaos; she intuitively seeks it out and upends up the lives of everyone around her, as surely as Frank’s stumbling drunkenness does.

And all of the characters are dealing with issues just as troubling and deep-seated. After breezing (and screwing) his way through high school, boy savant Lip is slowly that in the real world, nobody really cares how much of a genius he is, he’s still going to have to work for the things he wants—including real human connection. Next in line is gay brother Ian, who played out his ambivalent need for discipline by joining and then going AWOL from the army, and is now slowly coming to understand that he has inherited his mother’s crippling bipolar disorder. And so on.

By placing these very human, very distinctly drawn characters in one of the worst, most blighted and crime-ridden parts of Chicago (it is set in the Canaryville section of New City), presenting them without parody or exaltation, it allows you to draw the connections between you and them—and to measure the distance between you.

But if all Shameless really did was show us people who are very different from us, allowing us to compare ourselves (generally favorably) to them, it would be accomplishing nothing much more than an anthropology of the poor. And of course, these aren’t people who live on some other continent. They’re your neighbors, just a dozen blocks over. They’re also the people you could become at any time, just by making a few bad choices, or stumbling into some very bad luck.

And that’s why the show’s best moments are those when we see its characters interacting with, or intruding into, the richer world that lies just blocks away, or vice versa. In earlier seasons, this was generally accomplished through romantic liaisons: Fiona dating a charming car thief with an upper-crust pedigree, or Ian sleeping with rich older men he picks up at clubs.

But over the seasons, the show has gotten savvier about how it stages these encounters. Sure, Lip is dating a rich girl from Miami whose parents pay him 10 grand to stay away from her. But he’s alone on that train in last night’s episode, and the pains he must take to hide the watch she gave him reflect his own insecurities.

And this season, we’re finally starting to see the first waves of gentrification lap not-so-gently at the shores of the Gallaghers’ tumbledown hood. It starts innocuously enough: Fiona and Ian jog past a just-opened yoga studio opening. But soon a lesbian couple (both named Lisa, natch) moves in to a house that was recently foreclosed on, and they come knocking on local doors with a realtor in tow, offering double the value of the homes, presumably so they can install a better class of people as their neighbors.

It’s treated as a happy fluke by the locals—except Frank, who warns that a Starbucks can’t be far behind, followed by rising costs and more evictions. And of course he’s right.

Because he almost always is, somehow. Which brings us to perhaps the strangest thing about Shameless. Paterfamilias Frank Gallagher is a blithering idiot: a constantly drunk, amoral, self-aggrandizing, self-deluded bullshit artist and all-around shitpile of a human being. Shameless is a show about a family, and his connection to his family is tenuous at best. And while everyone around him changes, grows, has actual character arcs, he remains the same foul excrescence on the face of the earth.

Yet it is impossible simply to discount and discard him. Part of this, of course, is that he is played by one of the greatest actors of his generation; William H. Macy’s performance is simply impossible to take your eyes off of. His bravura speechifying is as astonishing as it is error-ridden and monstrous (in his screed against gentrification, he manages somehow to conflate the Holocaust, the Trail of Tears and the Great Depression), and the mischievous twinkle of his cracked smile hides a terrifying loneliness.

But it is also that Frank, that apparently immortal asshole (he should have died at least ten times by now), is in many ways the presiding spirit of the neighborhood—and of the show. He is, after all, the only character who is truly shameless. Our other protagonists, as they grow and learn and change, may one day lift themselves out of poverty. That is inevitably the goal. Unchanging Frank, on the other hand, is here to remind us of a truth we’ve known for millennia: Just because this particular poor family may one day succeed, that doesn’t absolve us of our responsibilities to the less fortunate. The poor, as the good book says, will always be with us. 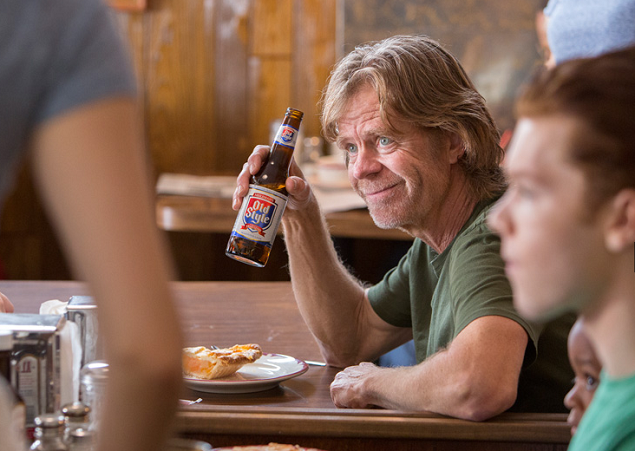