The execution of cartoonists, journalists and editors at the French magazine Charlie Hebdo was the most dramatic, if perhaps not the most murderous, killing done in the name of the Prophet Muhammad last week. Throughout the west, the response to this horrific act of terror and violence was an immediate mobilization of platitudes and hashtags, encapsulated by the “Je Suis Charlie” campaign. In addition to the Twitter hashtag “JeSuisCharlie,” that has become one of the most popular hashtags in history of that platform, some people have changed their Facebook profile picture to those words, and in many countries people have used that slogan on signs at rallies. The intentions behind this are the right ones-to show solidarity with the victims of this crime and to show support for the basic idea of freedom of speech.

The use of the slogan, however, like many kinds of political activity, is more focused on making the Tweeter feel good, and even self righteous, while overlooking the difference between almost all of us, and the people who were killed because of their role in Charlie Hebdo. In addition to being gifted artists who, in some cases, had spent decades dedicated to their craft, the victims of this act of barbarism displayed enormous courage. They never hid behind hackneyed armchair platitudes of the “I may hate what you say, but will fight to the death for your right to say it,” variety. Instead, they wrote and drew, often deeply offensive, but also at times extremely important, cartoons. They were satirists in the best tradition, harking back at least to Jonathan Swift, poking fun of the powerful whenever they thought it was necessary.

Few of us have the extraordinary combination of bravery and artistic talent of Honore, Charb, Cabu, Wolin and the other victims, so perhaps Tweeting “Je Suis Charlie” is the best way we can show solidarity with the victims, and their views. However, there was another way that the world could have made a meaningful gesture of solidarity. What if everybody who Tweeted “Je Suis Charlie,” had instead Tweeted a link to the cartoons that so offended the Islamist killers? What if every celebrity who held up a “Je Suis Charlie” sign, or every marcher who waived one, displayed an enlarged copy of the cartoon instead? Similarly, what if all those Facebook profiles were of the offensive cartoons, not the inoffensive slogan?

This gesture obviously would have offended millions of Muslims around the world, but if you aren’t willing to offend people, than sorry, but you’re not Charlie. It also would have put the people who displayed the cartoons at risk of facing physical violence, but if you’re not willing to risk facing physical violence, then sorry, mais vous n’etes pas Charlie.

Displaying the cartoons, rather than a slogan, shows the killers that they cannot wipe out speech and expression that they deem inappropriate or offensive, because it would not be possible to kill every person who Tweeted or otherwise displayed the cartoons. That might contribute to an environment where cartoons depicting the Prophet Muhammad in insulting ways, while offensive to devout Muslims, and perhaps viewed as distasteful by many others regardless of religion, would become as normal as offensive depictions of Jesus or Mary, or as offensive caricatures of Jews and their religious practices.

One of the heroes in this attack is Ahmed Merabet the French policeman who was brutally murdered by the killers fleeing the Charle Hebdo offices. Mr. Merabet, whose family is from Algeria, is a Muslim who was killed by fanatical co-religionists. His story is also part of this tragedy. Mr. Merabet’s brother Malek Merabet has spoken out about these terrible events, praised his brother and called for peace and respect.

The heroic death of Mr. Merabet has led to an “Je Suis Ahmed” hashtag and slogan that, while not as widely seen as the “Je Suis Charlie” slogan has nonetheless generated a fair amount of attention. Again, the sentiment here is good, drawing needed attention to the reality that many Muslims in France are hard-working, law abiding and decent people. However, we are not Ahmed either. His story is important but few of us genuinely share his background or story. There are better ways to recognize his sacrifice than through sloganeering; and Malek Merabet has helped lead on that issue.

The horror at Charlie Hebdo was only one part of what happened last week in France. After word of the killings spread, a fear that this would lead people to stereotype or attack Muslims was expressed throughout by many pundits and kibitzers. This sentiment is an important one, but by the end of the week it was innocent Jews, not innocent Muslims who were killed in French hate crimes.

This is significant, because many of us with some distance from the events probably have more in common with the French Jews who were killed than with the courageous cartoonists or the policeman who had died a few days earlier. Few of us can draw brilliant and cutting cartoons, keep on doing our work in the face of threats and bombings, or serve as police officers, but many of us have shopped for food on the eve of a sabbath or a holiday, and almost everybody has, in one form or another, bought groceries. Yoav Hattab, Yohan Cohen, Philip Braham and Francois Michel-Saada were ordinary people who died doing an ordinary thing. Posting “Je Suis Yoav” or “Je Suis Francois” may not be as dramatic as “Je Suis Charlie,” but it is probably more appropriate for most of us.

Last week’s events in France have shown us that in the age of social media, information moves more quickly than ever, outrage is cheap and easy but true courage remains rare. 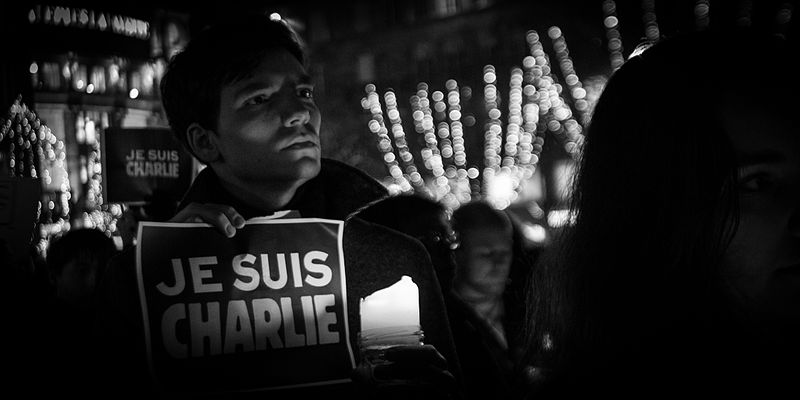