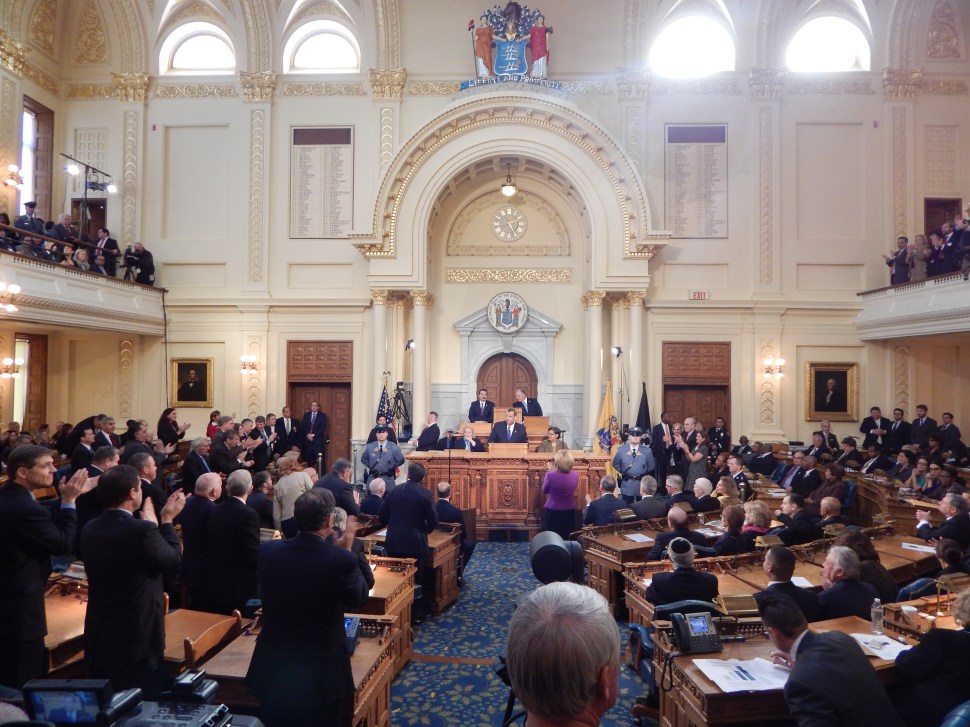 Christie’s 2015 State of the State address numerous times had Republicans (left) and Democrats (right) split on whether they should show their support.

When he came to Trenton in 2010, Gov. Chris Christie showed up with a tin star gleam in his eye as the former U.S. Attorney who put people – other politicians no less – behind bars for a living.

“What do you think the politicians in Trenton are going to think when they see two former federal corruption prosecutors leading them?” an incoming LG candidate Kim Guadagno chimed.

But as he prepares to get on that rostrum Tuesday for his fifth operatic aria, Christie this week appears to be less one-time lawman and more off kilter fan man coming in for a very awkward landing in a State Capitol where many lawmakers have lost interest.

“The way he’s behaved these last three weeks, who cares what he has to say?” a legislator told PolitickerNJ in confidence, groaning over the governor’s luxury box bear hugging of Dallas Cowboys owner Jerry Jones and details about the relationship between the football team owner and the New Jersey governor.

“I’m going to wear orange,” the source cracked, a reference to the sweater Christie sported on what Democrats hope was a fateful day in politics, a concentration of Christie’s public excess and one that the majority party wants to occupy the same infamy in political annals as the Howard Dean Scream, John Kerry windsurfing and Mike Dukakis in a tank – all iconic images that contributed to sinking those presidential campaigns.

Christie – at the precipice of a presidential run – always finds a way to mug for the national cameras, a routine that started in his first State of the State Address when he bucked up a GOP mangled by the 2008 presidential election when he made starry-eyed reference to the late Ronald Reagan as a “great president.”

Now he wants to protect some of those gains he made long enough to get those upswing visuals necessary to get him handsomely off the 2016 national runway later this month.

“After decades of gross mismanagement and shortsighted budgeting practices, Governor Christie came into office and acted decisively to bring the State’s budget back into balance – addressing $13 billion in combined projected deficits in his first 18 months – and struck a path of responsibility and reform,” according to a statement by the governor’s office in the lead-up to today’s State of the State.

“Governor Christie signed into law landmark pension and health benefit reform in June 2011, marking months of hard work, negotiation, compromise and ultimately bipartisan support. While Governor Christie made clear at the time that more work was needed, critical savings were achieved – pension reform alone will provide savings to New Jersey taxpayers of over $122 billion over the next 30 years.”

Christie’s national focus has intensified the movements of those Democrats seeking to supplant him, however, and that pension deal he once struck with the help of Senate President Steve Sweeney (D-3) now looks like a distant planet given those political demands that Sweeney must now fulfill to the public sector unions if he wants any shot whatsoever in a Democratic Primary.

Christie has gotten what he wanted here by virtue of his ability to jail, outmaneuver and/or intimidate those power players whom he needed to advance a political agenda in a tough guy state built by political party organizations.

Although he still has his alliances in the other party, the game has changed, and is changing each day.

Gleeful national Democrats seized on bullet points that stare Christie and this dog-eared state in the face as he tries to gaze into those Fox News cameras.

New Jersey ranked last year at or near last in the nation in job creation and has an unemployment rate higher than the national average. New Jersey has seen a record-breaking eight credit downgrades and the highest property taxes in the country.

Then there’s Bridgegate and its ongoing associations.

“During last year’s address, Christie sidestepped questions about his involvement in the apparent political payback scheme that shut down lanes on the George Washington Bridge, threatening public safety,” Democratic State Party Chairman John Currie complained in advance of today’s State of the State. “And, since that time, he has fought efforts to obtain basic information about his administration’s operations, continued to bully constituents and members of the media, and unrepentantly abused the powers and resources of his public office.

“Governor Christie has been an unmitigated disaster for our state,” Currie added. “While he wastes taxpayer dollars in a shameless effort at self promotion, his policies trample the hopes and dreams of New Jersey families. In the wake of his hypocrisy, Sandy survivors have been left out in the cold and pensioners were robbed of funds they were promised. Meanwhile, his economic record is one of repeated credit downgrades, increased property tax burdens, and stunted job growth. The true state of the state is vulnerable and neglected and, for this reason, the governor should really strike an apologetic tone.”

He won’t, of course.

But the question is whether the hubris of politics now prevents this political animal governor with the prosecutor’s resume from being effective in a state that for all its self-serving political antics, is a both-hands-on-the-wheel proposition.

“My fear is that he’ll do what he always does, which is center the entire conversation on one issue rather than all the issues,” said Assembly Budget Chairman Gary Schaer (D-36) in advance of today’s address. “My fear is he will talk about pensions or borrowing, TTF [Transportation Trust Fund] when we have a myriad of issues that are interrelated and many of which are related to the budget – that need to be addressed.” 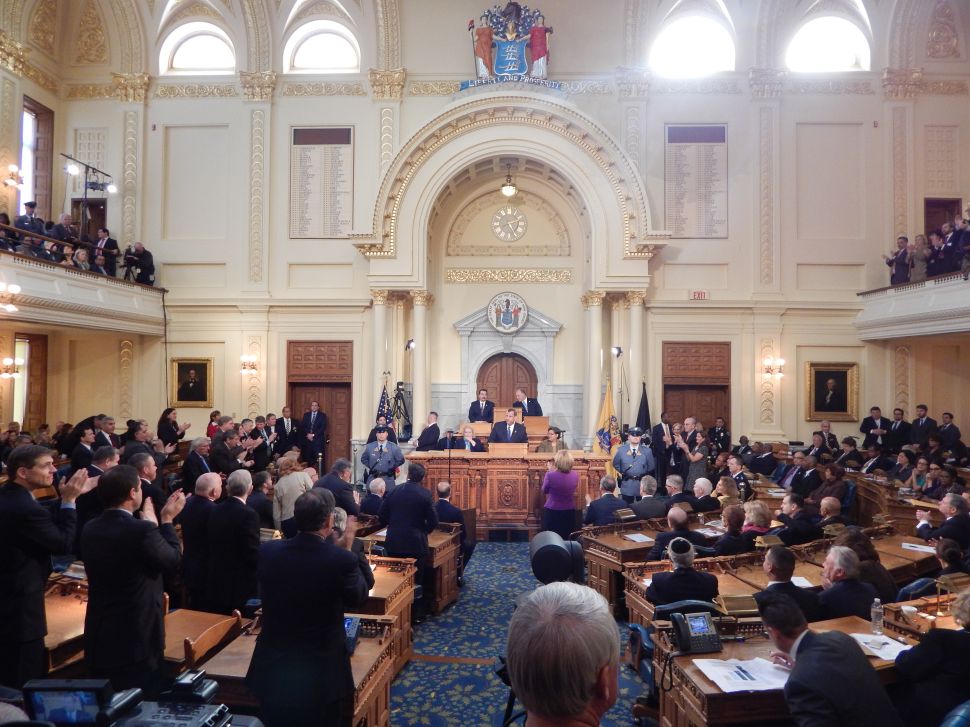