The memorial for Eric Garner caught fire last night as MLK Day was coming to a close. Police told the New York Post that the small memorial, located at the exact location where Garner died this past July, on Bay Street in Tompkinsville, Staten Island, is believed to have caught fire after a candle accidentally fell down.

Garner’s daughter, Erica, believes the memorial honoring her father was intentionally burned to the ground.

Ms. Garner was not the only member of the family that vowed to rebuild the memorial. Garner’s stepfather, Benjamin Carr, told NBC news that he intends on rebuilding the small site honoring his stepson.

“I’m going to rebuild it, every damn time they tear it down, I’m gonna put it back,” Mr. Carr said.

The memorial has been in place since shortly after the death of Eric Garner on July 17, 2014. A message sent to Ms. Garner from the owner of the property where the memorial lies, appears to indicate that this was the first incident where the memorial caught fire.

Prior to the fire yesterday evening, over 100 people gathered at the memorial to take part in a candlelight vigil led by Al Sharpton and the Garner family.

It is unclear whether the fire will be further investigated. 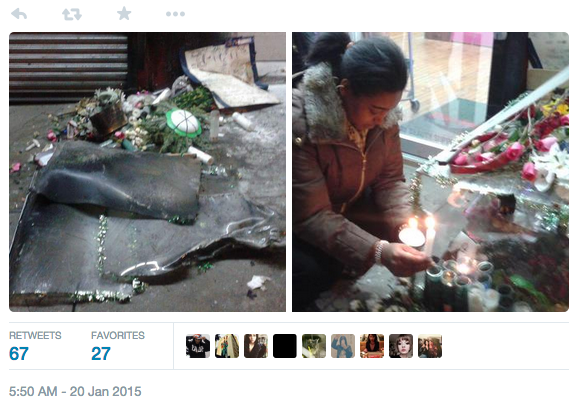