HACKENSACK – Bergen County Executive Jim Tedesco said that any favored Democratic candidate for the county freeholder seat left open by his ascension to Bergen’s top political spot has “yet to be determined.”

“I’ve had a conversation with [Bergen County Democratic Chairman Lou] Stellato. We have to have a convention,” Tedesco told PolitickerNJ on Thursday moments after he signed a memorandum of agreement that began the process of realigning the Bergen County Police Department with the Bergen County Sheriff’s Office. “There is some dialogue about trying to have a combined convention. Maybe we’ll have a combined convention so that we don’t have to bring people out in January to choose a freeholder and then in February to choose the candidates for the 2015 ballot.”

Bergen Democratic sources have told PolitickerNJ that several names have been mentioned as Tedesco’s possible successor. These names include: Chris Tully, a Bergenfield councilman who ran with Tedesco on the Democratic freeholder slate in 2013; Bernadette McPherson, a former Democratic freeholder and Rutherford mayor; Anthony Cureton, president of the Bergen branch of the NAACP and a retired ranking Englewood police officer; Jennifer Holdsworth, the political director of the New Jersey State Democratic Committee; and Roy Cho, an attorney who lives in Hackensack and who was the 2014 Democratic candidate in the Fifth Congressional District.

Sources also indicate that the choice could come down to a decision between a candidate from state Legislative District 37, which includes the Democratic strongholds of Hackensack, Teaneck and Englewood, versus a candidate from LD 38, a swing district currently held by Democratic legislators that is expected to be highly contested in the 2015 state legislative elections.

Tedesco went to LD 38 for the swearing-in ceremony in Bergenfield for Tully, who was re-elected in November 2014, after the police realignment agreement signing. Yet the new county executive did not tip his hand regarding any district preference when choosing a viable Democratic freeholder candidate.

“I just want somebody that wants to serve the people of Bergen County,” Tedesco said. 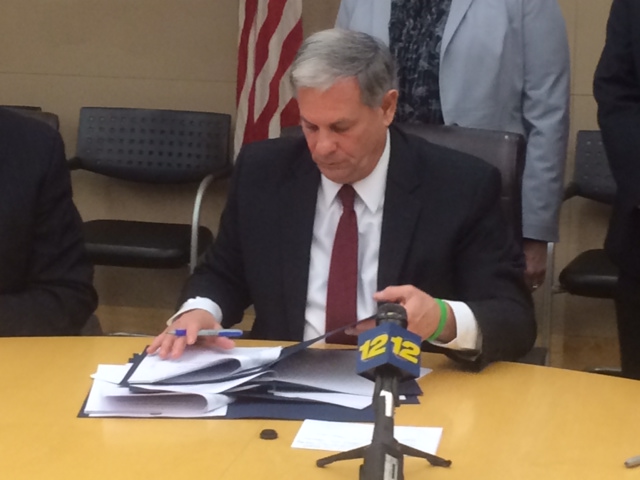