It’s TV’s most consistently thrilling show since Breaking Bad, but The Americans started its third season on the quiet side. Of course, this being The Americans, quiet is a relative term. There’s still copious ass-nudity, a kama-sutra scene, John-Boy Walton getting his ass kicked, a Frank Langella cameo, and a brutal on-screen act of sexualized violence. But for the most part, tonight’s season premiere simply picked up the pieces left behind by the season that preceded it. The USSR is bogged down in Afghanistan. The FBI is one step behind the “illegals” who keep stealing their secrets and kicking their asses in street fights. Agent Stan Beeman has a broken marriage, his mistress Nina has a treason conviction, and her boyfriend Oleg is desperate to save her. And sleeper agents Elizabeth and Philip Jennings continue to fight and fuck for the Revolution, while trying to keep their kids, especially headstrong daughter Paige, away from the front line. With all these ties to last season, it’s as good a time as any to look to the past for the secret of the show’s success.

Debuting in 2013 — the year essays by actor Anna Gunn in The New York Times and critic Emily Nussbaum in The New Yorker  would shine necessary light on misogynist reactions to women characters on prestigious dramas —The Americans benefitted from fatigue with antihero TV’s “wife problem,” in which the wives of the male leads are situated as impediments to their antiheroic male counterparts’ misadventures. On good shows, of course, this problem belongs to the audience, not the show. You kind of have to be a moral moron to believe that, say, Skyler White was wrong to oppose her husband Walter’s burgeoning meth empire, the way many “bad fans” did when they called her names and rooted for Walt to kill his way to self-actualization.

Nowadays, though, the dismissal of such attitudes is often aimed not at the bad fans, but at the shows themselves, an equally dubious proposition. I’m not sure how anyone can walk away from The Sopranos, Mad Men, and Breaking Bad thinking these shows want their audiences to take the side of Tony over Carmela, Don over Betty, or Walt over Skyler, or that anything but a reading of the show so sloppy it hardly bares consideration could lead you to think otherwise. Yes, strong antihero dramas treat their male protagonists with empathy, but empathy toward people who commit immoral acts equates to neither endorsement nor excusal of those acts, a fact these rich, complicated women underline. Fiction would be a poor, shallow sliver of itself were we to declare characters whose actions we deplore beyond the pale of understanding. If anything, a careful and considerate examination of such characters serves to highlight the gap between their very human desires and fears and the woeful consequences of what they do to fulfill them. (On the flip side, shows that don’t have the “wife problem” because they’ve barely got any prominent wife characters at all, like The Wire, get an undeserved pass.)

However you slice it, The Americans dodged the bullet. The show stars a wife who not only doesn’t oppose her husband’s awful antics, she leads the charge. Elizabeth Jennings isn’t Philip’s suspicious sweetheart or nagging conscience, she’s his partner in crime. Indeed, actor Keri Russell receives top billing over Matthew Rhys, and her character’s ideological fervor outstrips his; in the series’ pilot, he’s ready to turn himself in and defect, while she wants to continue the mission. Comrades the Jennings may be, but Elizabeth is first among equals, and The Americans is the story of her antiheroism above all.

But what does that amount to, exactly? For the purposes of that discussion, let’s put aside the tonally broader, plot-hole-ridden first season. Everything the show is interested in — spy-thriller action and suspense; the uncomfortable eroticism of the Jennings’ undercover work; secondary characters like FBI Agent Stan Beeman, the Soviet agents of the Rezidentura, and the Jennings’ kids; the steely, wiry physicality of Russell and Rhys that makes their characters so convincingly commanding even buried under pounds of big glasses, bad wigs, and spirit gum — got tighter and sharper in Season Two, to the point where few of the first season’s flaws remained.

With one major exception, that is: All the terrible things that Elizabeth and Philip do, the show acts as though they’re being done to them, not by them, and that’s a problem. The anhedonia of Don Draper, the depressive rages of Tony Soprano, and the world-collapsing panic of Walter White are all gut-wrenching to behold, but their shows come across a lot more clear-eyed about the pain they inflict trumping their own. By contrast, even though Elizabeth and Philip are basically always miserable, never seeming to take any pleasure at all from what they do or the skill with which they do it, we’re rarely asked to linger on the suffering they cause except insofar as how hard it is for them to live with it. (This is where the lack of a long-suffering spouse of whatever gender hurts the show structurally.)

If this moral dynamic sounds familiar, that means you’ve been reading your pop-culture thinkpieces over the past few weeks. If Mr. and Mrs. Jennings worked for the USA during the Iraq War instead of the USSR during the Cold War, we’d basically be talking about American Sniper, which has been held up as an inspiring exploration of how hard it must have been for a man to kill for his country. The people who got killed had it a lot harder, you know? And that’s true whether your flag is red white and blue or red and yellow. Empathy is valuable, but it must be tempered with moral clarity; the plight of a murderer pales in comparison to the plight of the murdered. Paradoxically, it’s by making Philip and Elizabeth so torn up by their awful vocation that its real awfulness is obscured.

And just as Season Two’s masterful plotting fixed the first season’s wonkiness, Season Three may well be poised to solve this larger problem in turn. Last season’s overarching plot — revealed so slowly and methodically that watching it unfold felt like unwrapping some hugely expensive gourmet chocolate — saw the Soviets begin a program in which the children of their sleeper agents will be turned into agents too. The initial attempt bore bitter fruit indeed: a hormonal teenager, fucked up by the revelation that his life was a lie, fell in love with his handler and murdered his parents to be with her, setting off a chain of events that nearly destroyed the entire network. Meanwhile, Philip and Elizabeth can barely handle their teenage daughter Paige’s involvement in a hippy-dippy church group. The cost would exact from this poor kid is screamingly obvious — which makes the question of whether her parents will go through with her recruitment a more direct line to the moral dilemma at the heart of the show than it’s ever offered before. The sharpest material in tonight’s episode explored the suspicion that Paige’s potential induction into the organization has engendered in the Jennings’ marriage, with Philip wondering if Elizabeth’s outreach to their kid is good parenting or mere spycraft. That’s an ethical faultline a good show can pry apart and poke around in for a good long time.

Which, interestingly, The Americans has already done — but in Russian, not English. In the relationship between the well-connected but surprisingly sharp young apparatchik Oleg Burov and Nina, the triple agent caught between the KGB and the FBI, the show gave us two characters who, out of love for one another (and in Nina’s case, affection for Stan Beeman, the FBI agent she was working), realize that there’s much more at stake in their skullduggery than their own emotional well-being. People they care about, people worth caring about, will suffer and die because of what they do. Even now, when his boss Arkady tells Oleg that there was more to Nina’s relationship with Beeman than she led them to believe, Oleg can’t write off her conviction for treason as the cost of doing business.

Contrast that with how Philip reacts when his asset Annalise is strangled to death by the Pakistani ISI honcho she was working, an act he walks in on — he starts playing mindgames with the guy before the woman’s body is cold. Maybe he’ll have a sad about it in the laundry room later, but Annalise won’t get the chance to be sad about anything ever again. Paige Jennings, in her idealism and stubbornness and sweetness, deserves a chance to live without professional murderers at her throat. Will her parents act on that truth, or sweep it aside? That’s information I hope The Americans can access. 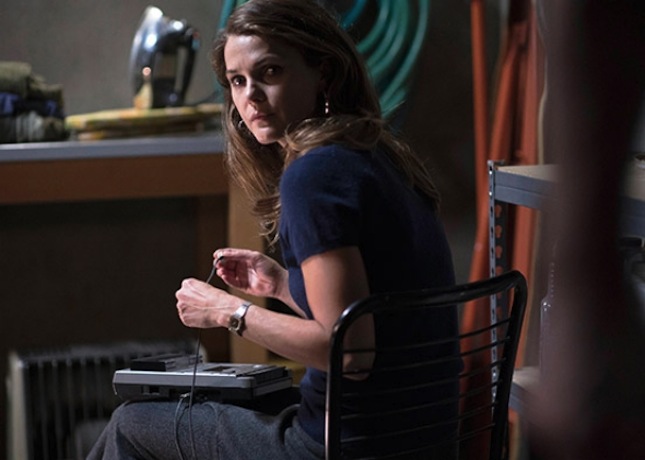