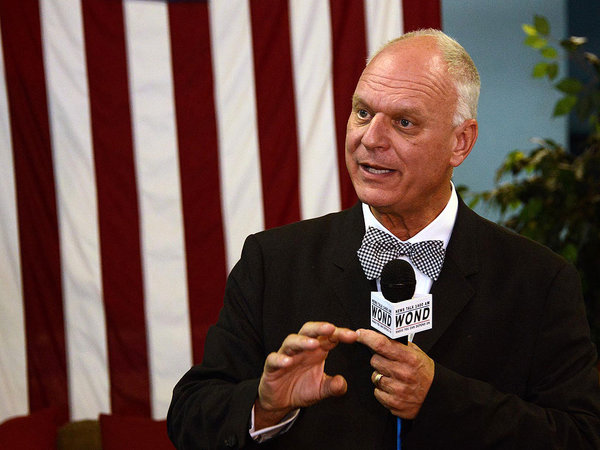 (Egg Harbor Township, NJ) — Unless you’ve just emerged from a protracted coma, you already know that Atlantic City is in the dumps. As a long-time (slightly irrational?) booster of this once-fabulous town it’s hard to admit this, but Atlantic City’s inexorable demise is actually accelerating.

“Atlantic City will rebound!” I’d exclaim to anyone who’d listen. “The city’s future is bright! They’ll get their act together!”

Then I’d extol Atlantic City’s natural geographical advantages. Or that Miss America was coming back. And the expanding airport. And the fabulous new Mayor!

And the truth is, Atlantic City does have a lot going for it. But mounting evidence suggests the forces working against a proper renaissance are greater than the the efforts to restore Atlantic City’s long-lost luster.

How else could a town, once so ripe with potential (and teeming money) get it all so very wrong?

Atlantic City Mayor Don Guardian (pictured) just marked one year on job. It was a tumultuous year that which saw 4 (possibly 5) of Atlantic City’s 12 casinos close their doors (putting 8,000+ people out of work.) 2014 was, by all accounts, a devastating year for Atlantic City’s gambling industry with a commensurate decline for the city in general.

To blame the Mayor for all that woe would be unfair since he’d barely been sworn in when the [expletive] hit the fan. If anything Mayor Guardian has admitted that something’s rotten down in Atlantic City, liking the road to recovery to a root canal:

“There’s no doubt … a very painful root canal, and I am very sorry for the people that lost their jobs, and for the taxes that had to be increased,” Guardian said, “but just like when (you’re done) with a root canal and you’re happy you (made) that decision, the city will be happy with this three or four years down the road.”

Atlantic County and state government’s frequently attempt to reverse Atlantic City’s flagging fortunes always involve large amounts of tax dollars and few long-term results. Chris Christie keeps trying to fix it, bless his heart. Jon Corzine tried too. Ditto Jim McGreevy and Christie Todd Whitman before that. Nothing gets better. The never-ending impulse to save New Jerey’s once gleaming gambling Mecca seems too intoxicating for politicians at any level in NJ to resist.

So the question remains, just who’s to blame for Atlantic City’s slow-motion implosion?

Thanks to #BridgeGate most New Jersey residents are familiar with at least one development mega-agency, the Port Authority of NY/NJ. Infamous for its largess and its capacity for epic shadiness PANYNJ’s nincompoopery goes back a lot further than “time for some traffic problems in Ft. Lee” fame.

PANYNJ isn’t alone. There are many opaque agencies and authorities in NJ including one in the shadows of those mothballed casinos. It’s called the Casino Reinvestment Development Authority. Wikipedia:

“The Casino Reinvestment Development Authority or CRDA is a New Jersey state governmental agency that was founded in 1984 and is responsible for directing the spending of casino reinvestment funds in public and private projects to benefit Atlantic City and other areas of the state. From 1985 through April 2008, CRDA spent US$1.5 billion on projects in Atlantic City and US$300 million throughout New Jersey. Reinvestment funds are received from New Jersey casinos, which are required by law to contribute 1.25% of gross revenue funds toward projects that are approved by the CRDA.”

Maybe it’s a colossal coincidence, but Atlantic City was swimming in money when the CDRA came onto the scene in back in 1985. Then slowly, under CDRA’s stewardship, Atlantic City made one costly, short-sighted development decision after another to land us in our current crisis. I can’t prove there’s a connection, but gosh, it’s awfully crappy timing for the overpaid DRDA bigwigs that all this bad stuff happened on their watch.

And since CRDA’s sole mission is to “direct the spending of casino reinvestment funds in public and private projects to benefit Atlantic City and other areas of the state” it’s safe to say bombed out pretty epically on that count.

So who’s running the CRDA you ask yourself. Who’s decides where all those of billions get spent?

I was wondering the same thing so I got to know the CRDA’s top brass via the Internet. Their executive director John Palmieri boasts “more than 30 years of public service experience in urban development.”

CRDA’s second-in-command has been on staff since 1989. Which sounds impressive until you think how fierce Atlantic City was in 1989 and wonder WTF was this person thinking watching AC fall pieces during their tenure?

There are many fossils on this agency’s payroll. The CRDA’s Director of Real Estate & Development and the CFO are approaching 25 years “serving” Atlantic City. The Director of Community Partnership and the Ethics Liaison both recently marked their 20 year milestone at CRDA.

Adding up all that, umm, experience and one thing is crystal clear: It takes really seasoned professionals to drive Atlantic City into a ditch.

— — —
Jay Lassiter is a New Jersey political gadfly with strong opinions about basically everything. When he’s not ending he death penalty or legalizing gay marriage and medical marijuana, he’s probably on Twitter. He looks forward to the Fleetwood Mac concert in Atlantic City Jan 24th.