A rose to every perfectly-coiffed woman lining the red carpet at the live Bachelor premiere, especially the girl in the white shirt and orange scarf who definitely thought way too hard about what to do with her head:

A rose to Marcus and Lacy for not showing up in the same outfits they wore for their Christmas Instagram photoshoot. No, but really—please look at this and this so we can all simultaneously stick forks in our eyeballs afterwards.

Their outfits may be different, but it’s comforting to know Marcus is still as boring as ever, and Lacy still seems equal parts surprised and delighted when she speaks a four-syllable word with no mistakes.

A rose to every time Farmer Chris inevitably uses a farming concept as an analogy for his journey to find love. “Love is a lot like farming,” he says. “You plant a seed, you hope it grows. Sometimes the weather isn’t your side, but with a lot of luck something beautiful can happen.” And if your crops all die, there’s always Bachelor in Paradise.

A rose to Cody Code, who’s broken up with Michelle Money and now presumably spends his days doing push-ups on Chris’s haystacks and his nights binge-eating ice cream and watching Bachelor in Paradise reruns.

A rose to ABC for this truly enticing compilation of all the fun things you get to do when you marry an Iowan farmer:

A rose to the moment I realized 45 minutes had passed and we still hadn’t made it to the first limo and SWEET BABY JESUS THIS PREMIERE IS THREE HOURS LONG SPDIFJSAPDOIFJSF.

Okay, if I’m going to watch this for three hours, can I at least have 50 percent more ACTUAL BACHELOR and 50 percent less Nikki Ferrell still uncomfortably defending Juan Pablo for being a seemingly heartless ass hat?

A rose to the time Chris used the phrases “a lot of work” and “mentally, emotionally, physically exhausting” to describe trying on suits. K CHRIS WE GET IT YOU DO FARMING.

A rose to anyone—anyone—who can figure out how to prevent the ground outside the Bachelor mansion from being soaked on the first night.

A rose to Britt, who literally wept upon seeing Chris for the first time. Was she crying because she suddenly realized he has no upper lip? Or that moving to Iowa means no more standing in crowded areas and giving out free hugs to strangers? No—she actually seems overjoyed to be here, and she and Chris have serious ~chemistry~. See ya in the Fantasy Suite, Britt-Britt.

Ummm, no roses to the cadaver tissue salesperson who greeted Chris with a fake heart in a box, which is really more f***ing disgusting than funny in any way.

A rose to Kaitlyn for a shockingly bold effort at scoring the first impression rose. “I know your name’s Chris, I know you’re a farmer, and I know you can plow the fuck outta my field any day,” she says when she speaks to Chris for literally the first time ever. Then she tells a joke about walruses and vaginas within five minutes of entering the mansion. Womp womp.

A rose to the slap that launched a thousand creepy Chris-on-Chris fan fiction stories.

A rose to whichever genius at ABC decided to stagger the girls’ arrivals, pitting the early arrivals against the late arrivals in heretofore-unseen levels of first-night drama.

Okay, a rose to K-k-krazy Kaitlyn for maybe not being as bad as I thought. Outside the mansion, she helps Chris learn the six-step (“Learn is a strong word,” Chris says, demonstrating humor for the first time). Chris says he likes her because she’s a “firecracker.”

Um, no roses to the girl who LITERALLY NAMED HER BABY KALE BUT HAS NEVER HEARD OF ALFAFA. Also, Mackenzie is 21 to Chris’s 33. Chris could be her DAD (provided he hypothetically had a baby at 12).

A rose to Britt for scoring not only the first impression rose, but the first kiss of the season. No roses to Chris Harrison’s subsequent fawning over the pair’s “make-out session.” STOP IT, DAD.

A rose to Grizzly Graham Bunn for being appropriately embarrassed when Michelle Money announced on live TV that Britt doesn’t shower. (Apparently Britt’s showering habits are the plot of a future episode? Wow, this season sounds riveting.)

A rose to Tara for going where no falling-over-wasted person has ever gone before—namely, getting picked at the first rose ceremony.

Despite pausing the rose ceremony to get some last-minute guidance from Chris Harrison, Farmer Chris makes some genuinely crap choices about who to keep around—including the onion girl. THE ONION GIRL.

No roses to ABC for ending this episode on the lamest cliff-hanger of all time: whether or not rejected contestant Kimberly (uh, who?) will convince Chris to keep her around. Since Kimberley got approximately 0.7 seconds of screen time and we barely know who she is, there is basically nothing at stake.

But wait! A million, trillion roses to the preview for the rest of the season, which features the following line: “I would rather chew glass and wash it down with a bag of hair than lose to her.”

STRAP ON YOUR TRACTOR SEAT BELTS (OR HOWEVER YOU FASTEN YOURSELF INTO A TRACTOR) FOR A WILD SEASON, BACHELOR FANS! 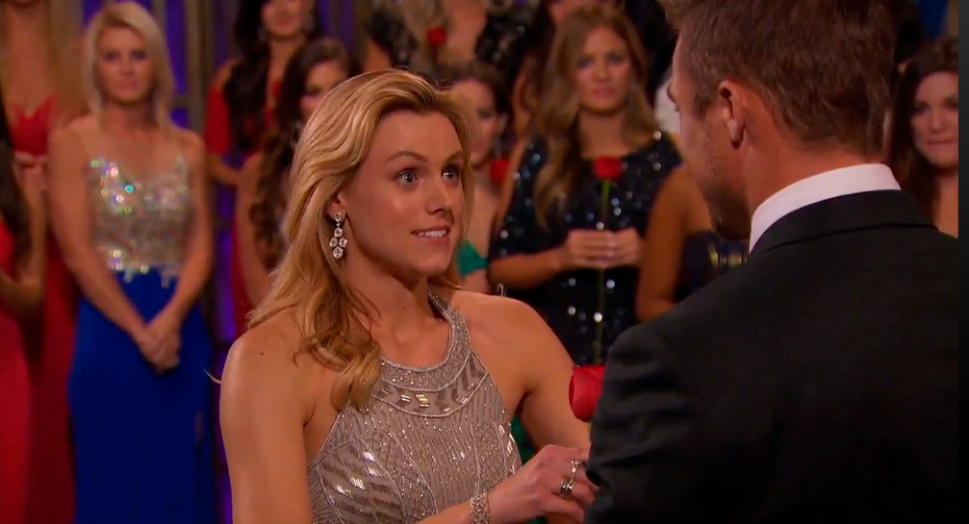