A rose to Chris Harrison who, now that Jimmy Kimmel is VERY THANKFULLY gone, is scrambling to re-establish his role as Chief Outdoor Shower Partner and all-around BFF to His Majesty Farmer Chris. “Obviously I talk to Chris all the time, and I know it’s going well for him,” Chris Harrison says to the ladies, anxiously stealing a glance at his phone to see if Chris has responded to his latest Snap.

Sadly, in another crushing blow to his confidence, Chris Harrison must turn over his matchmaking duties this week to Chris’s three sisters, who’ll be coming on the show to decide who gets a one-on-one date.

A rose to that girl on the left, who has literally NOT SAID A WORD ALL SEASON.

No roses to Kelsey, who I thought I really liked, but who’s turned out to be that girl who thinks she’s way too good for the Bachelor—not for Farmer Chris himself, but for all the ridiculous pageantry that comes along with winning his boring, boring heart. At the camping date, Kelsey spends the whole time dramatically pouting, ruminating on “taking a fork and stabbing it in [her] eye,” and announcing that this is “a date for bimbos.” Ummm, not to be rude, Kels, but had you ever actually, like, seen the show before you signed up?

Additionally, no roses at all to the fake smile and laugh Kelsey does whenever Farmer Chris shows up, both of which make me want to take a fork and stab it in my eye.

A rose to Carly the cruise ship singer, who has big, wide eyes and a song in her heart but just can’t catch a f***ing break. In case you forgot, Carly chugged warm, salty, off-the-teat goat’s milk last week, only to lose out on the group date to No-Kiss Becca. This week, Carly confesses to Chris’s sisters that she’s never had a man be nice to her, only to have them pick Jade—who literally just talked about make-up and Nebraska the whole time—to participate in the one-on-one date with Chris.

Um, a rose to the most WTF moment of the episode, which isn’t getting nearly the amount of attention it deserves—no, not the Onion Girl’s valiant (and very crazy) return to screen time, but that time CHRIS RAN AT THE GIRLS WEARING A METAL FACE MASK AND WIELDING AN AXE AND THEN IT CUT TO A COMMERCIAL AND LITERALLY NO ONE SAID ANYTHING ABOUT IT EVER AGAIN.

No, seriously—I did some very high-tech editing here so you can see how truly horrifying this moment was. Who does this, not just on a romantic date with a group of women, but ever? Is this a clue to some sort of unhappy childhood? Hidden murderous tendencies? A really specific sexual fetish? I NEED SOME ANSWERS, BACHELOR NATION:

A rose to Farmer Chris who keeps getting jolted out of sleep and forced to talk to lunatics—last week Jimmy Kimmel, and this week Ashley I. Listen, ladies, Chris doesn’t understand half—nay, 90 percent—of the things you say when he’s fully awake and using his listening ears. So when you crawl into his tent and say, “Inside I’m a friggin’ nerd” and, “[I’m] inexperienced in every way possible,” he’s not going to figure out that you mean you’re a virgin.

Anyway, Kaitlyn gets the rose on this extremely perplexing group date.

A rose to Jade, who has no discernible personality traits, but I know I’m supposed to care about her because every time she talks, the show plays that tinkly-sounding ~important~ music. Seriously—Jade has spent this episode talking about how she models “clothes” for a “website,” how she has an organic make-up line, and how she was born in Nebraska but eventually moved somewhere else, also in Nebraska. According to my calculations, Jade is VERY boring, but GOD DAMMIT THEY’RE PLAYING THAT MUSIC AGAIN SO I GUESS I HAVE TO LIKE HER.

Chris must like her, too, because she scores a rose at the end of dinner.

A rose to that time Chris acted like he’d been counting down the days until he got to see a sneak peak of live-action Cinderella, when really he was just relieved ABC hadn’t decided to promote the 50 Shades of Grey movie instead.

A rose to all the people who still have Multiple Sclerosis even after six reality stars put on wedding dresses and ran through a muddy obstacle course to help “raise awareness” for the disease.

A rose to Carly, who doesn’t win this either.

A rose to Jillian, who will forever bear the humiliation not just of having her butt hair censored on national TV, but of having her last words to Chris be, “Would you rather have sex with an STD-ridden homeless girl or not have sex for five years?” That, combined with Jillian’s complete inability to stop talking during her one-on-one dinner with Chris, earns her a rejection from Chris. I’d offer to help Jillian with her bags, but something tells me she can lift them herself.

Another rose to Farmer Chris for accurately identifying a raspberry and a banana when Megan feeds them to him, blindfolded, at the cocktail party. It may seem like an easy game, but Chris has actually only eaten soybeans up until this point.

A rose to every contestant on this show who’s still a virgin, which, apparently, is EVERYONE. As Ashley I. weeps furiously after revealing (coherently, this time) her virginal status to Chris, No-Kiss Becca announces that she’s a virgin, too. Hold up—has No-Kiss Becca ever kissed anybody, or, if she and Chris get married, is it going to look something like this?

No roses to Britt, who uses her precious private time with Chris to grill him about why he’s giving roses to anyone but her. Come on, Britt—don’t you know you’re violating one of the cardinal rules of Bachelor-dom? At least she’s not wearing head jewelry.

Anyway, Britt started off as a clear frontrunner, but at the rose ceremony, Chris calls her name last.

A ceremonial bouquet of roses to the Onion Girl, Ashley S., who did not receive a rose this week. Onion Girl, you might have walked out of the Bachelor mansion, but you will never walk out of our hearts. 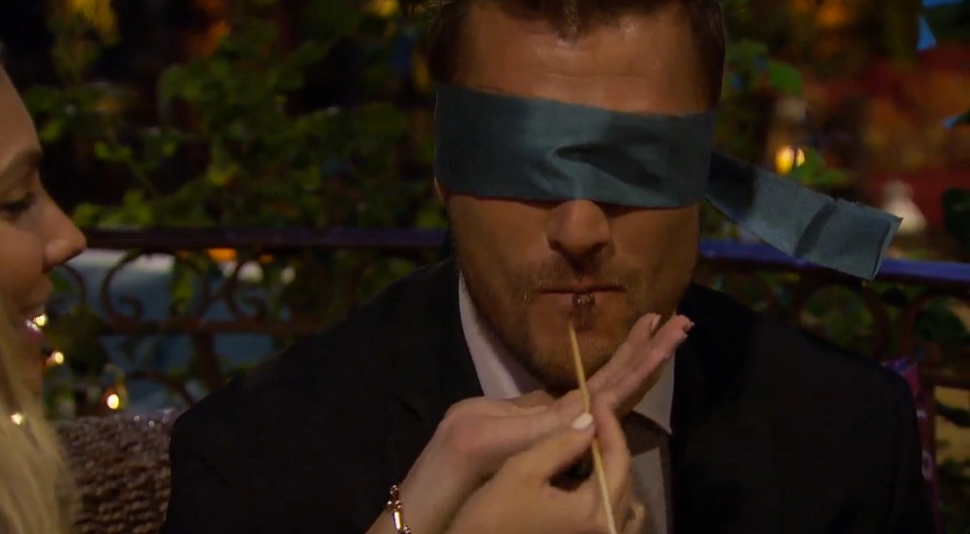