We who are meat eaters need not eat meat like mouth-breathing bottom-feeders. We who eat meat seek meat but need not timorously seek it. We are not mice, nor must we be lions, puffed with pride, who try to hide the mouse inside through smoke and char and crass charade and tales of getting laid. Men we are, no more no less, not abashed sinners, and as men we deserve a fitting house to eat our dinners.

Could that happy home be the Bowery Meat Company, the new restaurant from chef Josh Capon and restaurateur John McDonald? Perhaps, though at first the odds appear long. There is the name, for instance. Each of the three words—Bowery, Meat and Company—seem pulled at random from the lexicon of trendy restaurant buzzwords. The location, the soulless glass poop of the Avalon Bowery, had already chewed up and spit out a classy Veselka offshoot and is generally a gleaming blight in the East Village.

Plus, a meat company seems like the very last sort of company we need, especially in that neighborhood where DBGB does brisk trade in saucisson and speck. And when the vegetable is purportedly ascendant, every other recent opening seems to be a steakhouse. It’s a very bad time to be a cow.

Those gloomy portents quickly dissolve as one enters the wood-paneled, bourbon-toned restaurant. Nina Simone’s “I Wish I Knew How It Would Feel To Be Free” thrums under a pleasant din. Since most steakhouses in New York and across the country subscribe to the Siriusly Sinatra station on principle, this augurs well, as does the absence of the male majority most often found in steakhouses. The dining room, a sepia-tinged redoubt designed by Meyer Davis Architects, seats 130 people. Many of these people are women.

The secret charm of the Bowery Meat Company isn’t what common words appear in its name but which one doesn’t: Steakhouse. The Bowery Meat Company is not a steakhouse, though it has the single best steak in New York City in the Bowery steak ($54), an all ribcap beaut I deemed the best new dish of 2014. It is not a steakhouse, though potatoes, the Costello to steak’s Tagliapietro, are presented in every tantalizing aspect: whipped into a frenzy, gratifyingly gratinéed or cut to batons, tossed to the fryers and left to crenellate. They are zombified with butter and lightly browned, fondant and rub-a-dub-dubbed with sour cream and onion (and called a hash brown when we Chosen know it’s a latke). It is not a steakhouse, though there is a wedge salad. There are other salads, too, and a couple of great pastas and one insanely great one and lots of other stuff.

Steakhouses are defined by the narrowness of their offerings and the maleness of their clientele. At the Bowery Meat Company, all are welcomed and nearly all is served.

The Bowery Meat Company is just one manifestation of a welcome shakeup in modern day beast eating. These innovations take one of two forms, and both are vast improvements on the steakhouse’s dick-swinging ethos.

The first type, pioneered by Anya Fernald at Belcampo Meat Co. near Mt. Shasta in California, is the provenance pusher. Ms. Fernald controls the land on which she raises her cows, the slaughterhouses that kill them, the butchers that break them down and the retail outfits that deliver her delicious organic boutique meat to the consumer. So far there are five Belcampo restaurants in California, where the premium cuts are sold raw in a butcher case while some of the more rarified cuts are made into delicious burgers and eaten by conscious carnivores.

This idea is catching on. Kensington Quarters, for example, a new restaurant-slash-butcher shop in the Belcampo model, recently opened in Philadelphia’s Fishtown neighborhood. These places tend to have concrete floors and contain meat lockers from which doleful animals gaze unseeingly as diners swoon over their constituent parts. There is often a pedagogical component as well, but absolutely none of the patriarchal cigar-and-white-collar bullshit. More, these establishments face meat-eating admirably and directly, noting the steak was once living.

The second type of innovation is embodied in places like the Bowery Meat Company, which is less concerned with provenance and consciousness-raising, though all the meat comes from the Diamond Creek Ranch in Kansas, as it is with presentation and context. Eating steak shouldn’t be fetishized. While it should be a special occasion, reveling in it, as one often does at traditional steakhouses, perhaps stirs up too much ugly macho precipitate. Eating meat doesn’t have to mean treating all things like meat.

That insidious dynamic is wholly avoided at the Bowery Meat Company. Mr. Capon, Mr. McDonald and the chef Paul DiBari achieve this with a freewheeling selection of dishes. Mr. McDonald owns Burger & Barrel, as well as Lure Fishbar, which he runs with executive chef/partner Mr. Capon, and Mr. DiBari previously ran Lure’s kitchen. The breadth and depth of their skill is a boon to the diner at Bowery Meat Co.

On offer are New Orleans-inspired broiled oysters ($21), Bluepoints transformed into glorified shovels of breadcrumb and garlic butter. A cauliflower steak ($15), with hints of North Africa in plump raisins and Marcona almonds, doesn’t feel like a simulacrum of meat as much as it does a cri de coeur for the chou-fleur. Sullivan Country eggs are devilled and stuffed with Northern Lights caviar: salty, sweet, fishy pop rocks and dewy eggy wegs. Right on.

The touches are right on in a lot of other ways, too. A foie gras and chicken liver parfait, resurrected from the Lenox Room where Mr. Capon first met Mr. DiBari 19 years ago, is miraculously light and airy. There are ssam on the menu, barbecue pork belly given an extra kick by a few sliced red finger chilies that would make the Momofuku crowd tremble with glee. Mr. Capon, a husky-voiced people person, is often seen walking the room, doling out portions of a Hudson Valley duck lasagna, gooey with caciocavallo and Parmesan, from a Le Creuset. 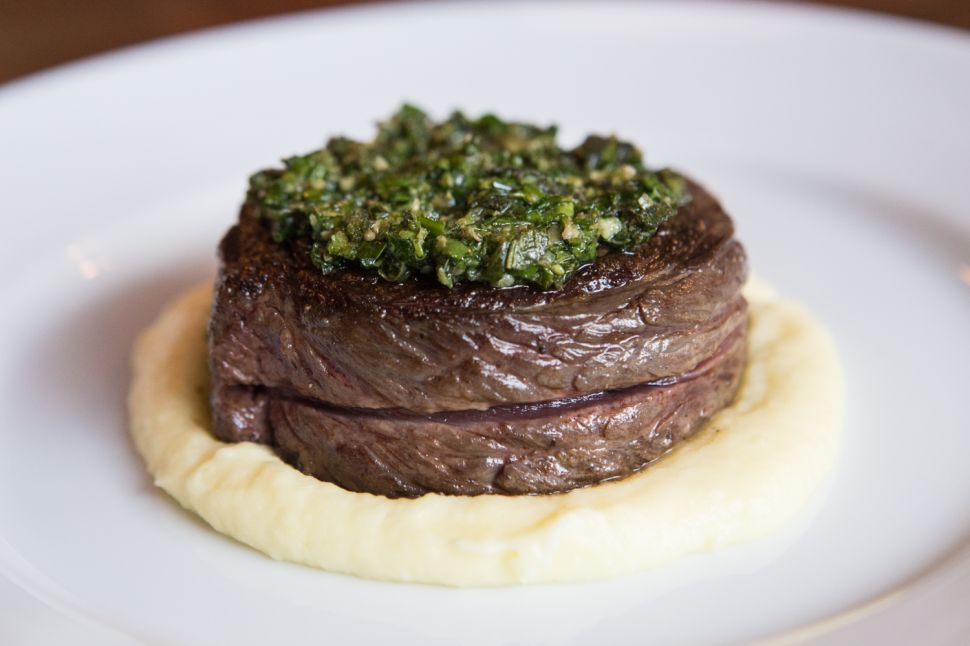