So, um… that happened.

Alicia kissed a man who’s not her husband, and also not Finn. My fellow Falicia ‘shippers and I are obviously going to have some ambivalence about this, but when Alicia just up and smooched Johnny after hearing the good news about Cary, I gotta say: I wasn’t mad at it. A little something had been simmering between them throughout the campaign, and it makes sense that the spark would get a little more ignited after Alicia went into beast mode and shredded Peter during debate prep. Sure, it was one of those closed-mouthed kisses that you might give someone in eighth grade during Seven Minutes in Heaven, but I’ll take what I can get when it comes to Alicia’s sex life.

We’ll come back to all that in a second, though.

It’s a rare episode of The Good Wife in which the most interesting story has absolutely nothing to do with Alicia, but here we are. If you’ve been with me all season, you know that I have had a hard time with the show fully committing to Cary’s trial and imminent incarceration as a season- or half-season-long story. I’ve had a hard time with it since it’s still so unclear what really happened, and since Lemond Bishop’s brightly colored ties no longer charm me, but the silver lining is that the storyline has given the previously underutilized Matt Czuchry some great material to chew on. The scene in which he contemplates leaving town was some of the best work he’s done in a season of already great performances.

Sidenote: okay, so I knew a private-sector attorney of Cary’s stature was gonna have a healthy checking account, but I audibly swore at my television when his balance came up on his phone. No, it’s not enough to live on for the rest of your life in a non-extradition treaty country, but um, it’s certainly enough to pay a prison consultant for six hours of his time.

Sidenote #2: Domenick Lombardozzi makes an appearance as Cary’s prison consultant, and his advice amounts to “get laid before you leave, eat your food carefully, and find a white friend.” Apparently, there’s no such thing as a post-racial lockup. I guess in that sense, it’s exactly like the rest of America. (And the irony of Kalinda going to a black man to help Cary find a white friend is not lost on me.) But I digress.

The real reason why I need a cigarette after this episode, though, is because it finally seemed to awaken something inside Archie Panjabi. I’ve been a big fan of her from day one (seeing even a vaguely bisexual woman of color on CBS thrills me to no end), and I’ve been waiting for some more forward movement with Kalinda’s character for a couple of seasons now. The storyline with her ex-husband that stretched across seasons three and four was strange at best, but here we have some real juice, and it comes just a few episodes from Archie Panjabi’s departure from the show. I’m guessing Kalinda did something egregiously illegal to save Cary in this episode in part because the show needs an organic reason to get rid of her, and they certainly can’t randomly shoot characters in the neck anymore.

But I just don’t care because it was all done so well and so in the service of character. Kalinda could see, after “rotating his tires,” that for all of Cary’s assurances, he wasn’t going to do well in prison. At all. And so she made a decision to stick her neck out for him, and not in a weird way that involved hushed conversations next to Lemond Bishop’s dishwasher. She committed a crime. A crime that, as it turned out, she didn’t even have to commit, because eager puppy Carey Zepps found a real issue in the investigation against Cary. This will, naturally, have blowback, and the only person I care about when the blowback happens is Kalinda, because the crime she committed basically amounts to ruining the life and career of a day player. If, say, the metadata she forged belonged to someone we knew from the State’s Attorney’s office, like, I don’t know, Finn, this would be a very different (albeit complicated) story. But I really can’t bring myself to get out of bed and cry for a red-faced detective I don’t remember ever having seen before. So sleep easy tonight, Kalinda. You saved your man.

The music in tonight’s episode (by the always awesome David Buckley) soared high over the top at times, but I only make that gripe because the entire episode was already suspenseful enough. Few shows have ever been as good as The Good Wife at turning arcane legal tasks (like finding a Brady violation) into edge-of-your-seat drama. So many people making and missing so many important calls. And speaking of phone calls, all of these characters spend half their screen time on their cell phones. In this respect, the show keeps it real in a way we rarely see on television in 2015. When so many other shows have people drive an hour and a half across town for a two-minute scene, The Good Wife is all about its characters’ iPhones, because real life.

Alright, I guess now we can talk about Alicia’s debate prep story. Until Peter showed up, I have to say, it was a little like Groundhog Day. Once again, I was watching Alicia be distracted. Once again, I was watching Alicia perform poorly. Once again, I was watching men yell at Alicia to be better. Chris Elliott did put in a fun, if unnecessary, appearance as the first Fake Frank Prady. Finn stepped in for a scene or two and then faded away into the Chicago afternoon. But when Peter walked in, I knew things would heat up. What I find most interesting about the “debate” between Peter and Alicia is that for all her antipathy toward him, Peter stirs up something in Alicia that very few other people on the show can. He gets to her, and he gets to her because on a deep level, he gets her. I kept thinking about the episode late last season in which Alicia spent the whole day under the covers in sweats, and she had that huge fight with Peter in the kitchen. It went a little something like this:

PETER: And you’re a selfish bitch. But you know what? We’re all that we have.

Peter will always be able to light a fire under Alicia, even if that fire leads her to kiss other men in parking garages.

Um, what was that?? I’m of two minds about that kiss. On one hand, I want the show to deal with it next week, and every other week, because I’m a 15-year-old girl and I just want everyone to talk about boys and feelings all the time. On the other hand, I want the show to just drop it, and let the tension continue to build between Alicia and Johnny. And I want Peter to see it and be jealous. And I want Finn to see it and be extra super duper double-dog jealous until he shoves Alicia up against a brick wall somewhere and makes out with her.

But I get it. Alicia’s married to the governor and wants to be State’s Attorney and all that. And I do want Alicia to win the election, if for no other reason that to see how awkward it’s going to be for her to be on the opposite side of the courtroom from her former friends. Keep the good stuff comin’, TGW. I’m not nearly full yet. 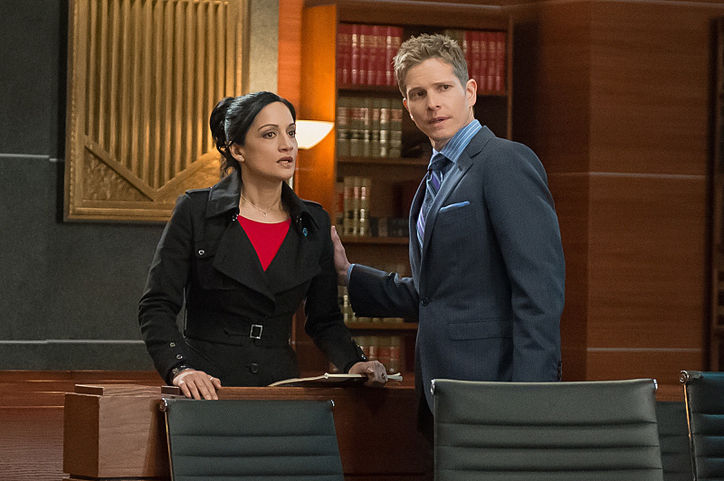