First off, this teaser. So many things happened in this teaser that I can’t process them all: Neil Gross’s divorce case, Peter getting caught in the act with Ramona, Alicia’s debate… oh, and that prescient but also duh story of a black guy being killed by white cops on video. Part of me feels like the show brought up that familiar trope of Peter unable to keep it in his pants just so Alicia would have to field deeply personal questions during the debate, but was this necessary? Last week’s excellent episode showed that Alicia would have more than enough to deal with up at that podium.

And then there’s the Cole Willis case. Anyone who knows how TV writing and shooting schedules work knows that this had to have been written between Michael Brown’s killing and the debacle on Staten Island. But I have to say that I was unsurprised that The Good Wife went there. This is, after all, a show about high-profile legal cases, so it has a unique opportunity to take cases from the headlines and from the public consciousness and do something provocative with them. And the Kings rarely shy away from such an opportunity.

When the verdict comes in, and it’s “not guilty,” I was even less surprised, because America. It was hard to watch the case turn into political jockeying between the Governor’s Office and the Mayor’s Office, but it was hard to watch mainly because it felt like what would really happen. No one pauses to think about the woman whose husband is dead, or the children who won’t ever see their father again; the first thought goes to riot gear and how not to let this get in the way of a reelection bid.

Ultimately, though, Peter decides to go down to the site of the demonstrations with a pastor in tow. This gives the two of them the chance to have a conversation about Peter and Alicia’s marriage, and whether or not Peter is still keeping the faith and wanting to “be good.” Peter doesn’t necessarily want to be good; he wants to be “effective,” whatever that means. Apparently it means dumping your mistress, because Ramona got the heave-ho shortly thereafter. And as for Peter’s speech to the demonstrators, while it was uplifting in its own way, it left a quixotic, antiseptic aftertaste in my mouth. As much as we all bleed red, some of us are white and some of us are black in the eyes of the law; for any elected official to pretend otherwise is out-of-touch at best and willfully ignorant at worst. I wanted someone to call Peter out on that. But I suppose we can’t get everything we want.

Sidenote: that little aside Eli had to the pastor when he talked about being unappreciated… do we think that means something, or was that just an offhand comment? Is the show setting the stage for Eli and Peter’s bromance to break up? I have to admit, it would be very cool if the show found something for Eli to do other than serve as Peter’s wet blanket.

It’s completely not at all believable that Chris Matthews would be moderating a debate for a county prosecutor’s election, but this is The Good Wife, so let’s go with it. Watching Chris rattle off all those inane debate rules — 45 seconds for an answer, 20 seconds for a rebuttal only if you’re mentioned by name, 5-second lightning round only if your eyes are green — one can’t help but wonder if the show is poking a finger in the eye of political debates to point out their idiocy. As we head into another three-ring election cycle, we’re reminded that no televised political debate is a forum for candidates to let people know where they stand on issues; aside from the occasional, thrilling, unrehearsed moment (“Please proceed, Governor”), they are just an opportunity for candidates to spew their talking points. The cynicism on display on The Good Wife would be soul-crushing if it didn’t feel so true to life.

So to escape the ridiculousness of the formally structured debate, Alicia and Frank repair to the kitchen, where they decide to have their own debate, watched by no one, while they both eat sandwiches made with white bread. (If y’all believe Alicia Florrick eats white bread, then, as my grandma would say, I got some land to sell you.) Their debate rages on in the kitchen until a black employee catches them and calls them on being two white people who are proud of knowing what’s best for black people. (If I had a nickel…) Before long, the minimum-wage minority audience grows, and, in a scene that lands just this side of Aaron Sorkin at his most self-indulgent, the cooks and busboys play their parts as Low-Income but Articulate and Informed Ethnics who can afford to stop their job duties to listen to Frank and Alicia argue. Then, wouldn’t you know it, the whole crowd starts to cram their way into the kitchen to watch the tête-à-tête, and Alicia makes some grand statement about how people should vote for her because she’s not going to try to stop racism. Her unwillingness to be idealistic strikes a chord, and Frank is so thrown off his guard that he’ll do anything, even take to the streets with the protesters, to avoid going back into the debate.

And finally, three-quarters of the way through the episode, we get to what matters: Alicia’s smoochy-poo with Johnny Elfman. They’re saying things like “it just happened” and “it didn’t mean anything” but it’s so clear that those are lies. LIES-A MINNELLI lies. (P.S. Dear ‘shippers: anyone notice Finn’s absence from this episode? Is the show backing away from a Finn-Alicia romance because Alicia is running to become Finn’s boss? I, for one, thought that made it hotter.)

With all of this going on, Neil Gross’s divorce case seems like an afterthought. I suppose it was shoehorned into this episode just to give Diane, Cary, and Kalinda something to do. There wasn’t any room in the episode to explore the ramifications of Kalinda’s desperate crime from last week, or where Cary and Kalinda are now in their relationship. And besides, I guess we needed some sort of family law case to bring David Lee back into the fold. Yes, Chumhum’s billables are substantial, but I find it quite hard to believe that Diane and Cary would immediately bring such a snake back to the firm. Then again, what’s that saying about friends and enemies and close and closer? Yeah, that.

Also, it looks like this episode is meant to set the table for a brewing conflict between Alicia and her fellow named partners, Diane and Cary, even if it feels a bit forced. As much as I’m pulling for Alicia to win, I’m a little baffled at her indignation. She had to know that, with all the time the campaign takes away from her job, Cary and Diane would be left to make decisions without her. And while I’m normally the conductor on the “gender double standard” train, it felt here like a desperate thing Alicia yelled out to avoid taking responsibility for her ambition. Unless this was Alicia projecting. In other words, when she was yelling at Diane and Cary about men and women, maybe Alicia was really talking to herself. Perhaps in Alicia’s mind, she gives herself such grief about being ambitious in part because she’s a woman. After all, is a Good Wife supposed to be ambitious? Is a Good Wife supposed to prize winning above all else? Is a Good Wife supposed to go to first base with her campaign manager in a parking garage? Whatever the answers, I’m glad the show continues to pose the questions. 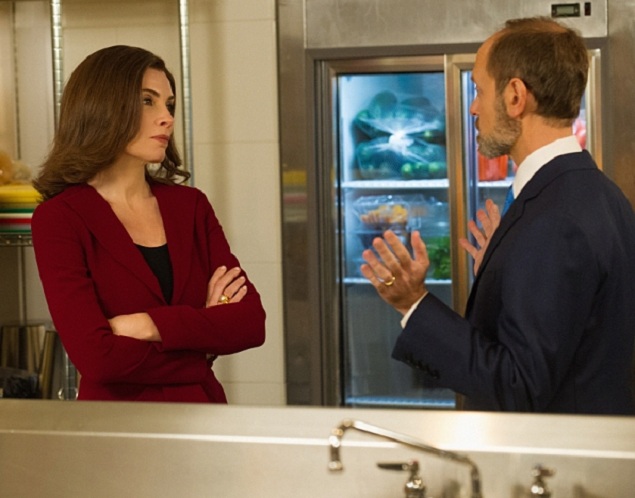