I’ll never understand how some people who love ballet don’t love Bournonville, the great choreographer who created a style—and a universe—in 19th century Denmark. He isn’t flashy, he isn’t heroic, he’s apparently old-fashioned and gentle and delicate; but his delicacy requires technique of steel. Not the technique that wins competitions—the blinding fouettées, the thrilling leaps—but a technique of charming soft jumps, exquisite épaulement, elegant adjustments. It’s a smiling technique, and there’s nothing lovelier in ballet.

Last week, the Royal Danes brought a group of mostly young soloists and principals to the Joyce with a program of Bournonville. A feast. Only eight of his full-evening ballets, plus an assortment of excerpts from others, have been preserved, but that’s more than we have from any other early choreographer. It’s as if they’ve been preserved in amber—the amber of the Royal Danish Ballet’s isolation and its pride in (and sporadic resistance to) its inheritance.

Bournonville’s most famous work is his version of La Sylphide, along with Giselle the quintessential Romantic ballet. Several years ago, when the entire company performed in New York, La Sylphide was the triumph, in contrast to more modern works that we didn’t need to see and that didn’t go down well. This time round the artistic management blundered by presenting only a compressed version of Act II on a bare stage. Stripped not only of its setting but of its story, it can have made little sense to audiences who weren’t familiar with it. What was young James doing pursuing the elusive sylph in the forest? Why did the old witch, Madge, revenge herself on him by giving him the poisoned scarf that would destroy her? It’s as if you were given a compressed version of Giselle’s Act II without knowing who this dead girl was or why the implacable Wilis were driving Albrecht to his doom. This is called not giving the audience a break.

And it’s a particularly disturbing thing to do to La Sylphide because, as usual with Bournonville, the subtext is the importance of community: James turns his back on his human situation (and his bride-to-be) to follow a sprite; the Sylph  attaches herself to a human, abandoning her sylph world. They both break the rules of community, and they die from it. This truncated version, absent both communities, has no subtext at all, no meaning, nothing but (very) pretty dancing, and a magisterial performance of Madge by the famous Sorella Englund.

Happily, everything else on the program was a celebration of life, of humanity—in Bournonville, humanity is always the hero—expressed not through plot but through the style and detail of his choreography: the buoyancy, the ease, the euphoria of movement. The Pas de Deux from The Flower Festival in Genzano is performed around the world, but nowhere with the enchanting bearing of blonde, pretty Ida Praetorius, with her exquisite feet and adorable tilt of the head, and Andreas Kaas, boyish yet manly, with a wonderful mop of hair and all the ardor a girl could hope for in her fellow. I would love to see them in Coppélia.

The climax of the program was the sublime third act of Napoli, a celebration of the wedding of the hero and heroine after they’ve survived the perils of the plot. Waves of dancers spring nimbly forward from the group, in duets, trios, solos, cresting in a glorious Tarantella that’s vibrant with tambourines, handclapping and smiles all around. This is dance as joy—you’d have to be dead not to be exhilarated and moved.

At times in the past 50 years, the Danes have seemed to want to break away from Bournonville, understandably hoping to move forward into the 20th and 21st centuries. Now they seem to be acknowledging that, like it or not, he is their greatest asset and most welcome calling card. (It’s the same thing that’s happened at Britain’s Royal Ballet, with Ashton coming back into his own.) Bournonville, Petipa, Ashton, Balanchine—the greatest choreographers cannot be denied.

Also recently among us: the Trocks. (All right, you sticklers: Les Ballets Trockadero de Monte Carlo.) I miss them already. Well, I don’t really miss the old staples—the over-jokey Swan Lake and Dying Swan and ChopEniana[sic], though Go for Barocco, Peter Anastos’ fiendishly clever send-up of Balanchine’s Concerto Barocco, will always amuse because it’s based on loving appreciation of the original, not slapstick interpolations into it.

This year, the Trocks brought us a new restoration from the 19th century, La Naïade et le Pêcheur, more interesting as a glimpse of a famous Perrot/Petipa warhorse than as a living ballet. (If you want a nymph playing with her shadow, go for Ashton’s Ondine.) The Cunningham parody, Patterns in Space, remains pointless—there’s nothing to it but jokes about John Cage’s music. But Elena Kunikova’s rendition of the Pas de Six from Esmeralda (based on The Hunchback of Notre Dame) is pleasantly suggestive of the original, even if it lacks the famous goat.

The triumph of the season was the company’s hilarious version of the Petipa/Gorsky Don Quixote. There’s too much shtick from Kitri’s innkeeper mother, but otherwise it’s a triumph of loving homage. The ultimate triumph, though, was the performance of Chase Johnsey—under his nom de danse, Yakatarina Verbosovich—as Kitri, “the prettiest girl in the village.” And she (he) was indeed one of the prettiest girls I’ve seen on the stage in a long time. Almost impossible to believe that here was a male in drag, whereas the best of the other brilliant guys of the Trocks are always clearly and proudly men beneath the tutu.

Even more amazing was Johnsey’s fabulous dancing, all of Kitri’s specialties—the high kicks, the fluttering fan, the jetés, the fouettés—in perfect and pleasing order. He was simply one of the finest Kitris I’ve seen in years; at least two recently departed ABT ballerinas didn’t come close. The Trocks management knows a good thing when it sees one—Yakatarina was the scheduled Kitri for all 10 of the Don Q. performances.

And thank you, Trocks, for the following program note: “Due to economic reasons, [Don Quixote and Sancho Panza] have been eliminated. You may, if you like, imagine the aristocratic vagrant and his constant companion … wandering about aimlessly and getting in everyone’s way, which in most versions is all they do anyway.” 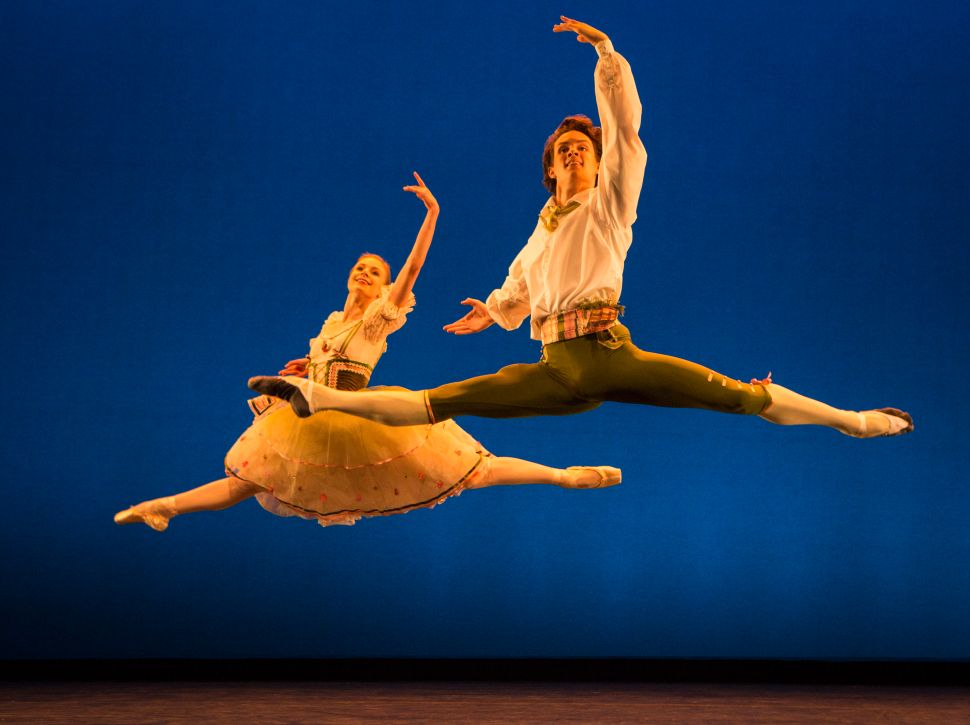