Welcome back to the Millionaire Matchmaker, the show that’s sort of about finding love but mostly about second-tier celebs boosting their careers. (BTW, did you guys hear TLC is going on tour?!)

Perez—sorry, it’s just too weird to call him Mario—says he’s had a lot of trouble finding guys to date. There’s the fact that he’s a single dad (to the most adorable baby ever, FYI), but the biggest problem is that people tend to judge him. They only see him as the biting, snarky Perez persona he’s cultivated over the years, and not as the sweet, baby-adopting, non-orange-haired Mario he is on the inside.

At a meeting with Patti, Perez laments the horrible reputation he’s created for himself, and admits he “got lost” in the character he created. His wake up call, he said, was making an It Gets Better video and receiving scathing criticism because, as one YouTube commenter put it, he was “celebrities’ greatest bully.” Is it just me, or is it starting to feel like appearing on this show was Perez’s way of convincing the world (but really just the people who watch Bravo) that he’s not a monster.

Anyway, now Perez has left L.A. and moved to New York to find a husband and ALSO REPAIR HIS REPUTATION and find a father for his child BUT LOOK YOU GUYS PEREZ HILTON IS NICE AND NOT WEIRD-LOOKING ANYMORE.

Moving on! Our next millionaire is fabulous Real Housewives star Sonja Morgan, who divorced J.P. Morgan’s grandson in 2008, and is ready to be married again. Sonja says she wants a guy with a life of his own—not someone who’s in it for her money or who wants to be in front of the camera.

Patti’s also convinced that Sonja needs “safety,” because she’s “so sweet [and] so vulnerable.” LOL, remember that time Sonja threw a party in honor of herself, and someone threw a leg across the room?

Next, it’s time for Patti and her minions to find a man for Perez. Instead of compiling a mixer full of 10s (i.e., the pretty Zac Efron-esque boys Perez tends to like), Patti recruits a bunch of “8s,” because she thinks they’ll make better husbands and dads. Boy, that’ll be fun for the men to learn as they go back and watch this episode.

After nixing a pretty boy named Cody who says he masturbates to the captain of the high school football team, and a guy named Scott with unfortunately spiky hair, Patti settles on Gregory, who owns a salon.

Now it’s Sonja’s turn. Whereas Perez had no say in his blind date, Sonja gets to choose from four men hand-selected by Patti. Why did Patti do it that way? Matchmaking is so mysterious!

Of Sonja’s four men, one is boring as hell and another is a chiropractor from Queens with the single most repulsive fake tan I’ve ever seen. She’s not interested. Of the remaining two, she likes Kent, a nice-looking man with surprisingly voluminous hair, but ultimately goes for Thomas, a huge, high energy guy who looks like he might enjoy wrestling alligators and having sex afterwards.

You know what I can’t help but notice? On most episodes, Patti lets her two millionaires talk to each other. They usually make delightfully awkward small-talk about how bad each of them is at dating. But last night, Perez and Sonja didn’t interact at all. Maybe she’s mad about this? Who knows.

It’s time for the millionaires’ master dates! First up is Perez, who’s taking Gregory on a Segway tour of Venice Beach. A Segway tour is a great date idea for anyone looking to marry a dad, because it’s a proven fact that dads love Segways.

When Perez meets Gregory, he’s surprised to discover he already knows him from “Mexico” in “2011.” Er, okay! They seem excited and friendly with each other.

Okay, I’m a little concerned—no, a lot concerned—about Perez’s date outfit. Why is he wearing huge shorts pulled up and belted around, like, his nipples? Has Perez Hilton been dressing this way ever since he became a dad? If so, I don’t think it’s his reputation that’s preventing him from finding dates, TBH.

For Sonja’s date, Patti insists she do a cooking class. According to Patti, you can judge a potential mate by how he performs in a cooking class. “A lot of guys sit back and expect to be served,” she explains.

It’s funny how Patti recommended a cooking class for Sonja right around the time noted hot chef Rocco DiSpirito was releasing his new cookbook, isn’t it? Like, what a crazy coincidence!! It’s awesome how Patti’s matchmaking advice synced up with Rocco DiSpirito’s cookbook release in a completely non-engineered way at all.

Patti admits she’s bummed that Sonja chose hyper-sexual Thomas—and she’s right. As Sonja does all the real work, Thomas does gross things like dangle a piece of pork from his mouth and make Sonja take a bite of it. That doesn’t sound like “safety” at all, amiright?

But Patti is a 742nd-generation matchmaker, so she had a back-up plan all along. She pulls out Thomas and replaces him with Kent, the guy Sonja had liked second-best. Kent immediately starts peeling shrimp—a symbol, according to Patti, of his “masculine energy.” Patti is pleased with herself.

At the end of the class, Sonja has to choose between Thomas and Kent to accompany her on the rest of the date. She picks Kent, obv.

Back at the Segway tour, Perez and Gregory are talking about Perez’s persona.

“Any time someone is in the public eye,” Gregory tells the camera, “what you’re reading and seeing is completely different from how they are in real life.” Aww, maybe there’s hope for these two, despite Perez’s heinous shorts!

After the Segway tour, Perez and Gregory chill on a rooftop with some champagne. “You can’t say no to champs!” Gregory yelps.

It all looks really fun and romantic but then all of a sudden, out of nowhere, they both pleasantly acknowledge they have zero chemistry but they’re great friends and it’s been fun to hang out. They clink their champagne glasses and the camera pans away. Well, that de-escalated quickly.

We can’t say the same for Sonja, who’s now in a hot tub with Kent, drinking champagne and sweatily making out. Get it, gurl.

At the end of the episode, Patti concludes that although Gregory isn’t the one for Perez, she now knows he’s capable of finding true love, which is basically an optimistic way of saying she failed. Or admitting that finding love wasn’t Perez’s top priority to begin with. Either one.

As for Sonja, she and Kent have kept in contact over phone and text, and Kent is planning to come visit her in NYC. If their love affair isn’t a subplot on the next season of RHONY, I’m gonna be sad. 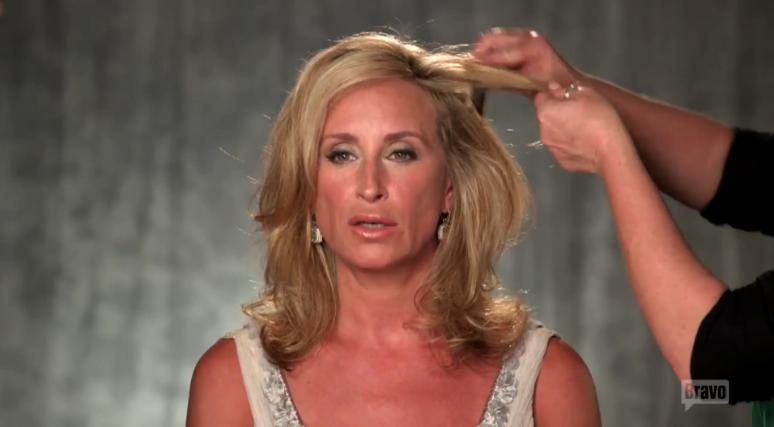