In opera time, three seasons is nothing. It was only three seasons ago, for instance, that the New York City Opera presented the last of its repertory, and the spring of 2013 at the Met, with its new productions of Rigoletto and Parsifal, seems like only yesterday.

So it’s particularly bewildering that before 2013 there was no such thing as the Prototype Festival, a program so essential that it feels like it must have been around forever. With a splendid sense of appropriateness, this festival of new opera is the first important event in the New Year, and the pieces it showcases offer at their best the thrill and hope of a New Year’s resolution.

If the Prototype shows I caught Sunday didn’t quite rise to the level of blinding brilliance of Gregory Spears’ Paul’s Case from last year’s festival, both presentations were meaty and challenging, worth the trek to such untraditional opera-going destinations as Soho and Dumbo.

The more conventionally operatic of the afternoon’s programs—and, keep in mind, this was no Rigoletto—was the one-act tragedy The Scarlet Ibis, based on a short story by James Hurst that’s become a fixture on high school reading lists. Composer Stefan Weisman and librettist David Cote follow the Southern gothic tale closely: in early 20th century North Carolina, the rambunctious Brother tries to teach his disabled younger sibling Doodle how to walk, run and fight so he can be a normal kid.

But, like the wounded tropical bird that somehow finds its way into the family’s yard, Doodle is not destined for an everyday sort of existence. Angry that the child cannot grow stronger, Brother abandons him during a storm, returning later to find him dead.

The creative team for this piece deserves kudos for recognizing so ideal an operatic subject, rich in emotion that can best be expressed in music. The troubling theme of the meaning of “normal” also makes this work particularly suitable to teens, a group the creators call in their program notes “underserved” as an opera audience.

Perhaps because Mr. Weisman had this younger public in mind, his music tends toward the deliberately simple and understated, without grandiose flourishes that might cause high schoolers to squirm with embarrassment. The nine-piece American Modern Ensemble took an understated role, accompanying the recitatives and arias with modest block chords and occasional plaintive solos to link scenes. The musical language is conservatively “American,” with a hint of Aaron Copland in its wistful open harmonies.

Director Mallory Catlett met the challenge of suggesting the story’s farmhouse, barnyard and swamp in the compact, low-ceilinged Here performance space by evoking the tiny scale of children’s toys. We first saw Brother (mezzo-soprano Hai-Ting Chinn) playing with toy soldiers as his imagined battles played out with minutely detailed shadow puppets, and the action developed on and around plywood-topped tables like those you’d use as a base for an electric train set.

This sense of a child’s playful imagination made feasible the appearance onstage of Doodle, who in the course of the piece ages only from infancy to about 6 years old. Depicting him was a spindly puppet designed by Tom Lee and voiced by the fully visible countertenor Eric S. Brenner. Now, Mr. Brenner is a burly fellow, physically just the opposite of little Doodle, but he sang with such delicacy and charm that he seemed to disappear as a performer, leaving only the character visible.

A particularly subtle touch was the high-lying distribution of voices: three women, a countertenor and a baritone, suggesting the female-centric world of a young child. Abigail Fischer’s honeyed mezzo soothed in the Mother’s serene lullaby, and the contralto Nicole Mitchell boomed ominously as the superstitious Auntie. If Keith Phares had few vocal opportunities as the taciturn Father, even brief phrases were elevated by his richly textured baritone.

By far the longest part in the opera is Brother, who’s in practically ever scene, and Ms. Chinn simply astonished. Bleaching most of the vibrato from her light mezzo, she sounded—and, even more amazingly, acted—the part with utter conviction. Brother is the ideal of “normal” to which poor Doodle is forced to attempt to conform, but here normality took the form of an Asian-American woman playing a 6-year-old boy from North Carolina. And yet it wasn’t until the opera was over and I was on the train to Brooklyn that the nontraditional nature of this casting even occurred to me; in the moment Ms. Chinn simply was Brother.

What waited at the other end of that train ride was something of a disappointment. The staged choral piece Toxic Psalms at St. Ann’s Warehouse, featuring jaw-droppingly gorgeous singing from a group of about three dozen female voices called Carmina Slovenica, seemed slowly to drown in its own portentousness.

The work is a collage of classical and modern chorus numbers treating on the theme of shared sorrow, strikingly staged by Karmina Silec with abstract group movement ranging from tiny twitches of the head to a robust parade ground march. The music is almost entirely vocal, with occasional support from drums, a bass guitar or prerecorded sound effects, and the variety of sounds these singers created with their voices was mind-blowing, everything from traditional “operatic” soprano to pitchless screams and yells.

Visually the show was elegantly spare, with the singers swirling around in distressed goth tutus and Beyoncé pompadours. But Ms. Silec imposed on the material a sledgehammer of a sociopolitical message. “Through the music the project reflects Palestine, Syria, Pussy Riot, weapons, concentration camps, blood feuds, extinctions, contaminations of religions, and human brutality,” a program note warned us, and, as if all that weren’t enough, at one point a woman carrying a broken accordion trudged on stage and announced, “I was raped.” Nuanced it wasn’t.

The women of Carmina Slovenica are collectively and individually heroic; even when pirouetting across a stage littered with fresh lemons, they sent their voices pealing out like a band of angels. So special a talent deserves a subtler vehicle than Toxic Psalms can provide. 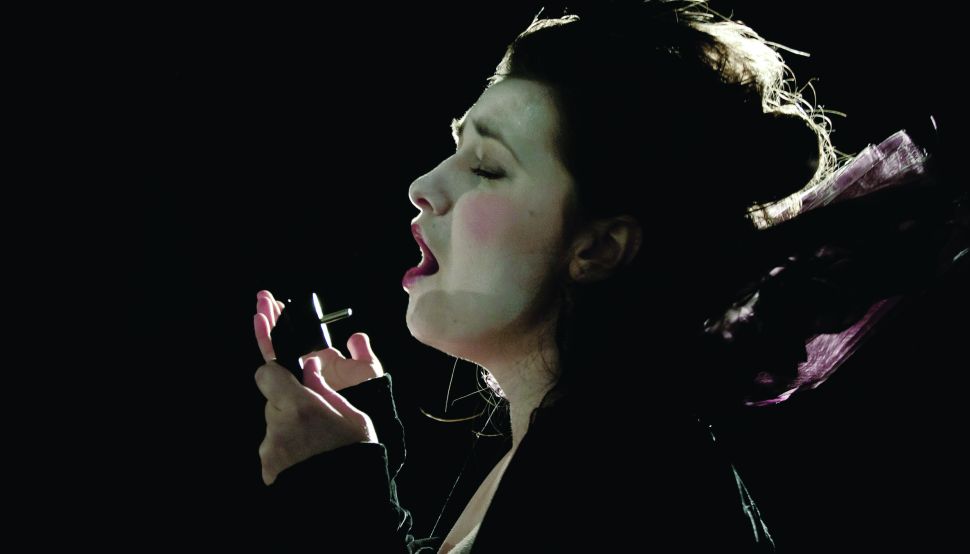