In a new column, Sean T. Collins examines several episodes of HBO’s award-winning drama The Wire at a time to figure out what made it such a groundbreaking show. Whether you’re a fan of the original, or haven’t seen an episode but are still lying to your friends at parties to save face, this is your chance to catch up on the show now for its remastered rerelease in widescreen HD. Find previous entries here.

The chair recognizes Stringer Bell. What to make of this consigliere turned kingpin turned real-estate mogul and gangster parliamentarian? In Season Three, The Wire posits String as an honest-to-god reformer, amid a cast of characters consumed with the idea, from ambitious politician Tommy Carcetti to conscience-stricken cop Bunny Colvin. And a reformer he is, to a point. Stringer correctly sees that it’s violence, not drugs, that attracts police attention to the drug trade, and he works to acquire the skills necessary to keep product flowing without the accompanying tide of blood. Authorial intent is usually for suckers, but on a show as editorially driven as this one, creator David Simon must be given the floor, and his repeated characterization of String as a force for positive change in the drug game during interviews and essays counts are borne out by how the show plays out.

This doesn’t mean the show lets Stringer off the hook, necessarily. He’s clearly shown to be naive in his belief that a creature like Marlo Stanfield can be massaged into compliance, his skullduggery with D’Angelo and Donette is as reprehensible as anything any prestige-drama antihero has ever gotten up to, the disconnect between his commanding presence in the gang and his earnest-schoolboy appearances in community college is weirdly adorable and a bit pathetic, and his attempts to force the hoppers and dealers in his employ to play by Robert’s Rules are played for some of the biggest laughs in the series. (And in this season, with Carver’s threat to beat a suspect “harder than you beat your own dick” and a murder mix-up involving the murder of a dog instead of “my dawg,” that’s saying something.)

But those laughs come at the expense of the underlings, not String, and that’s where the show goes wrong. Putting the “organized” in “organized crime” is not without precedent — hey, it worked pretty well for Lucky Luciano and Meyer Lansky! — but one look at either the goofs and goons below him or the dyed-in-the-wool warlord above him, Avon Barksdale, should have been enough to show String his plan is doomed to failure. Can you imagine Tony Soprano saying “The chair recognizes Paulie Walnuts?” without it coming across as transparently ridiculous? I can’t, and neither could David Chase — hence his creation of characters like the pretentious malaprop factory Little Carmine Lupertazzi, or the Gladiator-quoting Ralphie Cifaretto, who exist to embody and satirize those delusions of grandeur. (Little Carmine was always right, as it turned out, but that would have been a lot clearer if he wasn’t trying to sound like a grand fucking statesman.) Yes, Poot’s supposed to sound silly when he says “Do the chair know we gonna look like some punk-ass bitches out there?”, but String’s just as silly for expecting anything else.

For all The Wire’s astute, unequalled chronicling of systemic failure, it’s oddly susceptible to the Great Man theory of history, even if the only thing the men in question are great at is fucking up. Think about the connecting thread of this season’s many storylines: Ambitious politician Tommy Carcetti sees Baltimore’s high crime rate as his opening for taking a run at the mayor. To hold him off, Mayor Royce demands lower crime rates from police brass Burrell and Rawls, with a hard ceiling on murders in particular. To placate Royce, Burrell and Rawls relentless ride the majors and lieutenants, scapegoating poor Marvin Taylor in a series of scenes that are excruciating to watch for anyone who’s been called on the carpet by their bosses and forcing figures like Bunny Colvin and Cedric Daniels to shape up or ship out. To live up to this new mandate, Daniels is first forced to blow his wire on Proposition Joe’s people, then to shift his unit away from kingpins like Prop Joe and Stringer Bell entirely. In response, McNulty and Kima simply double down on their Ahab-like obsession with String. This idealistic insubordination echoes Colvin’s reaction to Burrell and Rawls, responding to their bullshit-speckled call for security theater and bogus stats by reporting everything as-is and creating the “Hamsterdam” free zones where drugs can be sold without fear of arrest. The dick-measuring contest between Avon and Marlo (not to mention Omar and String) has a similar effect on the other side of the thin blue line. Everything proceeds from personal pettiness. Shit flows downhill, as the middle managers mumble to each other during the unbearable “compstat” meetings where Rawls rules, but The Wire sure is insistent on showing the hands that hit the flush.

Maybe, as a work of fiction rather than a history book, it has to be. For one thing, the omnipresence of horrible bosses is itself a systemic critique, in a way; if it makes the show lean heavily on its heavies, well, sue them, it’s a TV drama. Rawls and Royce are a hoot every time they’re on screen, with Rawls in particular emerging as a living nightmare of a boss this season. Aiden Gillen’s reptilian charm as Tommy Carcetti sustains material that requires him to spend most of his time off on his own, with few other new characters of note compared to the people that surrounded, say, Frank Sobotka during Season Two’s comparable dock detour; it’s a short road indeed from the First District to King’s Landing and Littlefinger for this guy. And Frankie Faison’s acting commissioner Erv Burrell, when he isn’t frantically politicking to save his job, delivers one of the season’s defining lines in the stentorian tones of a trained, if profane, Shakesperean: “The gods are fucking you? You find a way to fuck them back. It’s Baltimore, gentlemen. The gods will not save you.”

Instead, we get devils. Lord knows how The Wire kept adding practically perfect performances to its roster season after season, but in Jamie Hector’s dead-eyed predator Marlo Stanfield it found its greatest villain. From the moment we first see him, framed the arm of some soldier holding a gun to junkie Johnny’s head after he and Bubbles accidentally scuff his car, he glides around the street unflappable and emotionless, unless power-hunger counts as an emotion. Who cares about what could happen when he gets the power he craves? “Sound like one of them good problems,” he says, in my personal most frequently utilized line from the series.

Equally strong, and on the side of the angels by the time the season hits the halfway point, is Chad Coleman as Cutty, the old-school Barksdale soldier who’s paroled into a world he no longer recognizes. Coleman creates so much of this character physically — his wide eyes, his awkward gait, a body slightly too big for his out-of-date clothes, a longer hairstyle and full beard that set him apart from his more stylish younger counterparts. Several of the season’s strongest sequences are his: walking the city around on the day of his release, soaking in the golden glow of the early-autumn sun; making his way through a raucous house party in slow motion, overwhelmed by the pleasures of the flesh on offer now that he’s out of prison and back in the game; taking responsibility for a failed hit on one of Marlo’s corner boys, mustering all his courage and character to tell Avon “The game ain’t in me no more.” Obviously, Bunny Colvin’s grand social experiment and McNulty’s deliberate sabotage of Daniels will matter more to the season as a whole than Cutty’s change of heart. But of all the drug warriors we’ve encountered so far this season who’ve refused to follow orders, he’s the one worth following into whatever battle he chooses to fight next. 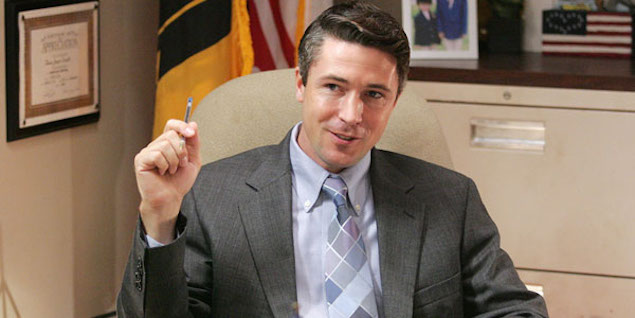