Call it heartbreaking. Call it breathtaking. Call it brutal. But don’t call The Wire’s fourth season tragic. This final stretch of episodes, surely what most people think of when they call The Wire the greatest show of all time, contain many of its most agonizing moments, its most crushing defeats. But tragedy implies inevitability. What makes this the hardest, greatest part of The Wire to watch is that there was nothing inevitable about any of it. If people had tried harder, politicked less, cared more, the ruined lives of the series’ school-based season could have been saved.

An air of impending doom hangs over the show for episode after episode, casting an unearthly glow like the Christmas lights that begin showing up in the cold streets and hallways toward the end. Then the dominos fall with punishing rapidity and finality. The children we’ve followed are scattered to the four winds: Randy abandoned to be beaten in a group home, Duquan dropping out of a high school he was in no way ready for, Michael a dead-eyed killer forever scarred by the man who molested him, Sherrod dead from a hot shot his mentor Bubbles prepared as a last line of defense since no one who promised to help him ever came through, even Bodie Broadus shot to death — by Michael — for his inability to reconcile himself with mountain of corpses piling up behind boarded-up row-house doors all around him. The people who tried to help them are left to deal with their devastation: McNulty screaming and cursing and finally returning to detective work after his attempt to help Bodie got him killed, Bubbles hanging himself in an interrogation room and then breaking down in the arms of a fellow junkie as he hits rock bottom, Sgt. Carver sobbing and pounding his steering wheel, the blows muted by his rolled-up windows as his horn honks over and over, its sound and fury signifying nothing. And the man in charge of solving it all, Mayor-elect Tommy Carcetti, reveals himself to be just another politician, allowing the school system he runs to starve rather than kowtow to a Republican rival in order to get the cash needed to save it.

Sure, the show maintains its “two steps back, one step forward” method of ending each season, mixing enough wins into the losses to keep viewers from feeling like the game is entirely fixed — Daniels and Pearlman, the supercouple who are actually good at their jobs, are put in positions of real power; Lester is given carte blanche to revive the Major Crimes Unit; Cutty survives his ill-fated attempt to rescue Michael from the streets and falls for the nurse who helped heal him; Namond is freed from the corners to live with saintly Bunny Colvin; the dashing young car thief Donut, his fingers previously broken by a brutal cop, rides again; Omar and company pull off the heist of a lifetime. But it’s window dressing. A hack runs the government, a hack runs the police department, hacks run the schools, Marlo Stanfield runs the streets, careless goons like Herc can ruin a kid like Randy’s life without thinking, and caring cops like Carver can’t do a thing to stop it. To watch this show work this hard to construct its complex tower of narrative only to bring it crashing down on the heads of its characters is a wonder to behold.

And it leaves room for eerie beauty, too. Some of the show’s loveliest, most haunting shots since the docks of Season Two appear during this stretch, utilized to devastating narrative effect. Think of McNulty and Bodie eating together in a park, the tranquil setting darkening and brightening and darkening again as clouds pass over the sun. Recall the crunch of dry grass, the rustle of the wind through bare-limbed trees, the sound of a freight train’s horn echoing through the distance as Lester and Bunk investigate the abandoned playground where their suspected victim Lex was last spotted and discover the boarded-up row house that holds his body. The camera rotates around Lester as he realizes where all of Marlo’s missing murders wound up, using the wide-open space to suggest the enormity of the crime. “This is a tomb,” he tells Bunk, absolutely certain. “Lex is in there.” The camera does the work again, taking in the environment just as Bunk does. It’s an echo of a shot earlier in the season, where we see Snoop and Chris exit one house in which they’ve murdered and entombed someone only to pass another after another after another, and it conveys the scope of the discovery, the horrified awe of it, better than words ever could.

Amid such spectacular material, less flashy characters could get lost in the shuffle. Don’t let them. Consider Commissioner Erv Burrell, quietly one of the best characters on the show. What makes Erv run? It’s not police work: The guy is hostile toward the Major Crimes Unit, indifferent to any aspect of the job other than juking the stats to make the department look good, and completely mute on any issues that involve protecting and serving the community, ostensibly the whole purpose for police in the first place. It’s not graft: Unlike, say, Clay Davis, Burrell doesn’t pocket dirty cash, and beyond making what one assumes is the highest salary in the department, there’s no windfall to reward his middling management. It’s not the pleasures of being in charge: There’s no sense he has much fun in the job given all the ass he constantly has to kiss and all the messes he constantly has to clean up, and he’s not a gleefully dictatorial bully like his deputy Bill Rawls either. It doesn’t even seem to be prestige: Nobody, inside or outside the department, thinks he’s very good at his job, and it’s tough to imagine him retiring upon a bed of past glories. No, Burrell is actually a more frightening figure than anyone whose motives we could recognize. He’s like a robot, programmed to do nothing but move up the chain and stay at the top when he gets there. As portrayed by actor Frankie Faison, he rarely displays any extreme emotions, his sonorous voice (he’s The Wire’s equivalent of Jim Carter’s basso-profundo butler Carson on Downton Abbey) maintains the same smooth, deliberate timbre whether he’s flustered (often), angry (less often), or simply secure in his position (most often of all). Being Commissioner is the end and the means of his existence. What hope does anyone have in a system helmed by a person who’s evolved with no purpose other than to be the system?

Yet as maddening an obstacle to progress as Burell is, he’s no mustache-twirling villain, present on the screen simply to be booed and hissed. He’s too unique and complex a figure to be read as merely loathsome, just as Rawls and Royce are too funny, Carcetti too slippery, Marlo and his minions too sinister. This restraint on the part of the show is invaluable. Think of how easy it would have been this season for David Simon and Ed Burns to create some awful tenure-abusing teacher, some ass-covering administrator, some simpering school-board bureaucrat to didactically embody all that is awful about the school system. (Keep this in mind next season, when the newspaper industry doesn’t get quite so lucky.)

Only the lower-level cops get pure-dee dirtbag characters to demonstrate their institution’s failings: Colicchio, the Western District warrior who only understands busting heads and racking up stats; Marimow, the lieutenant sent to Major Crimes for the express purpose of turning it into Minor Crimes; Walker, the psychopathic sadist who beats, robs, and in Donut’s case straight-up tortures any suspect who crosses his path. And given the show’s tendency to show even its hero cops engage in abusive and illegal behavior that gets redeemed by their righteousness and results elsewhere, there’s nothing wrong with tipping the scales in the other direction just a bit.

There is such a thing as too far, though. Exhibit A: De’Londa Brice — Wee-Bey’s common-law wife, Namond’s mother, and the worst character on the show. Not even Duquan’s alcoholic family or Michael’s junkie mother are portrayed as entirely unsympathetically as this one-dimensional harridan, who bullies her boy into the family business and actually asks the police to put him in jail so other kids can beat some toughness into him. She makes Wee-Bey, a literal mass murderer, look like the voice of reason! There’s no “in” for her, no way to relate to or empathize with her — she exists to be awful, and that’s it. Frankly, this show can’t afford that kind of excess when it has so few fully fleshed-out women characters to compensate. This goes double in a season where the final destruction of so many of its central (male) characters is set in motion when one of them gets in trouble over a false rape accusation by a spurned eighth-grade girl! As Duquan puts it in the season’s most cringeworthy line, “All this come up because of what Tiffany said happened in the bathroom.” A series this smart should know better.

And for the most part, it does, at least for now. The show’s weakest material is on its way next season, but it will seem weaker still for the contrast with this one. The Wire Season Four is a genuinely towering achievement in television, one that for once deserves the hype directed at so many shows the moment they distinguish themselves in the slightest. It’s some of the saddest, smartest drama ever to air — a hell I’m grateful to go through. 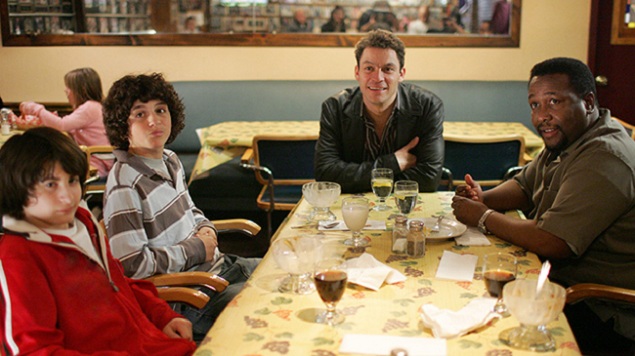