And it should go without saying, but MAJOR SPOILERS BELOW.

The string has run out. The Wire had a huge soft spot for Stringer Bell, the thinking man’s druglord whose downfall drove the second half of the show’s third season; ironically, it revealed full extent of its affection for the man only when it killed him. From Wallace to D’Angelo to Frank Sobotka to Bubbles’s former running buddy Johnny, who’s found OD’d and eaten by rats in the season’s final episode, the deaths of major characters are usually handled with a sense of gut-wrenching tragedy and waste. Not so with Stringer. This guy gets the chance to get gunned down in a blaze of glory, his murder made possible only by a straight-up superhero team-up. There are more major deaths to come in this series (huge shock, I’m sure), including at least one that’s shockingly unceremonious — a necessary move, creator David Simon would argue, since affording players in this squalid game any sendoff more spectacular than that would be dishonest. In Stringer’s case, though, The Wire was willing, in the words of Slim Charles, to fight on that lie.

The end of Stringer — his misguided ambitions, his misplaced faith in his ability to outfox experienced white-collar criminals like Clay Davis, his successful but short-lived attempt to overhaul Baltimore’s drug trade into something more cooperative and less lethal, his tasteful interior decorating — at the points of Omar’s shotgun and Brother Mouzone’s Walther PPK provided the season’s climax. But his story had no shortage of competitors in its headlong rush to the finish line. Lacking the tragedy that the deaths of Wallace and Frank Sobotka provided its predecessors, but it compensated by setting up a whole series of ticking time-bomb scenarios and counting them down one on top of the other. Thanks to Avon’s betrayal, Mouzone and Omar got to String first, but Daniels, McNulty, Kima and company were only steps behind, while his parallel plot to rat Avon out to the cops was nearing completion just as quickly. Even as the police prepped to pinch Avon, his own men were moving into place to take down his rival Marlo Stanfield. It felt, marvelously and terrifyingly, like any fucking thing could happen at any fucking moment.

Elsewhere, in the social-experiment storyline centered on Bunny Colvin’s de facto decriminalization of drugs in “Hamsterdam,” a similar race was on. A whole slew of characters — Bunny, his loyalists like Carver, rebellious troops like Herc and gung-ho Travis Bickle wannabe Colicchio, the press, the brass, the Mayor, and the increasingly shifty politician Tommy Carcetti — ran neck and neck to determine the final fate of the free zones. In that case, only a series of bad decisions led to the race’s unhappy resolution: Commissioner Burrell thought Mayor Royce was delaying the shut-down in order to more securely fuck him, when in fact Royce was inches away from exporting the initiative’s successes citywide; acting on Burrell’s faulty intel, Carcetti chose to hang Colvin out to dry and hang it on the Mayor for political advantage. Given The Wire’s thesis that the system is irrevocably fucked — a thesis on evidence in the endemic brutality and corner-cutting displayed by even the most heroic cops, which with post-2014 hindsight is even more uncomfortable to contemplate than Simon likely intended it to appear at the time — it couldn’t have gone down any other way. But such is the skill of the show that it sure as shit felt like it could have.

Out of all of Season Three’s many reformers, only Cutty winds up firmly in the win column, his victory small but real. After his placement in the center of the action during the first six episodes, with screentime equalling if not exceeding that of his fellow newcomer to the cast Tommy Carcetti while easily besting the great white hope’s moral and emotional pull, he spends much of the season’s back half in the margins, working within any system — church, state, and eventually, through Avon, the underworld — that will help him toward the modest goal of opening up a boxing gym for local kids. Aside from some momentary head-fake suspense over whether his $15,000 grant from Barksdale will get him swept up in the major crimes detail’s investigation, his story’s stakes are low. But he’s the only player left standing when Hamsterdam is shut down, his loss of his juvenile clientele reversed when he seeks them out on the corner where they now work and faces down Fruit, the sneering lieutenant of Marlo Stanfield who ripped him off earlier in the season. This is as close to subtle as The Wire gets in delivering its messages, in this case that modest, small-scale, localized attempts to increase the level of basic human decency in the world are the most likely to meet with success.

That message is echoed in the fate of Jimmy McNulty: After losing his white whale, Stringer Bell, to the harpoons of Omar and Brother Mouzone, he takes down the worthiest target left swimming, Avon Barksdale, then voluntarily demotes himself from Daniels’s detail in favor of a happier life walking the beat in the Western District — and, apparently, wooing working mom and dock cop Beadie Russell, a development that’s saved from being completely out-of-the-blue only by some heavy-handed foreshadowing (a photo on the fridge, a run-in with a lookalike) over the preceding episodes. McNulty’s done good work, work that will benefit the city (in theory, anyway; he’s accidentally ushered Marlo, a straight-up psychopath, right onto the throne). He’s proven his skill, intelligence, and perspicacity to peers he’d previously butted heads with, from Daniels on down. But he’s finally heeded his pal Lester’s advice that there’s no case so big and so perfect that it can fill whatever’s missing inside him. Better to improve a few lives, including his own, a day at a time.

Fittingly, small pleasures — cinematic pleasures — may be the finest ones on offer this season. After all, Avon never emerged as much more than a genial warlord, so his grand falling-out with his partner in crime lacked the heft it should have had. Much of the work on the other side of the war was relatively picayune business about how to get a wire up on the burners that the Barksdale outfit was using, and the fun of chronicling that painstaking process is definitely suffering diminished returns in this third go-round, especially once the childlike wonderment of tech savant, serial fuckup, and excessive-force enthusiast Prez was no longer on offer. And speaking of those burners: Even on a show with a track record of zero when it comes to crafting three-dimensional wives and girlfriends, Squeak, the comic-relief nag who hounded burner-buyer Bernard on every roadtrip, takes the cake. (Bernard’s “I can’t wait to go to jail” after they both get arrested was admittedly pretty lolworthy.)

So the smaller moments, the cinematic moments, the sexy moments, stand out. Bubbles walking through the Dante’s Inferno that is Hamsterdam after dark. Marlo looking behind him when he notices a pretty girl making eyes in his direction and remembering he’s in an empty booth, as if he’s still so new at being a big shot that he can’t quite believe she’d be interested. Colvin and McNulty conferring about the free zones, their faces foregrounded against the blue sunlit sky behind them. Avon sending Omar’s grandma a new church hat to apologize for shooting it off her the previous Sunday. Marlo’s muscle: gothy, cold-blooded Chris Partlow and pint-sized assassin Snoop. Awful Deputy Commissioner Bill Rawls popping up in a gay bar and playing “The Flight of the Valkyries” during a raid. The final-episode return of the surveillance-camera footage that characterized many of the earliest episodes of the show. Marlo and his rim-shop mentor making plans, illuminated by the store’s eerie blue glow. McNulty looking absurdly handsome in a denim shirt during his first visit to Hamsterdam. A trio of magnificent bare asses, belonging to Carcetti’s advisor (and McNulty’s fuckbuddy) Teresa D’Agostino, Kima’s anonymous late-night fling, and goddamn Major Cedric Daniels respectively. The repeated lines of dialogue that call attention to the show’s fantastic writing, realism be damned: Marlo and Chris referring to the burdens of success as “one of them good problems”; Stringer and Bunny both telling their impending executioners “Get on with it, motherfucker”; McNulty and Bunny declaring “fuck the bosses”; Fruit’s echo of Frank Sobotka’s “we ain’t back in the day” at the season’s start. The gunslingers, Omar and Brother Mouzone, walking side by side to their rendezvous with destiny. A flock of pigeons cooing and fluttering out of the way as Stringer runs into the room where he’s about to die. It’s Baltimore, gentlemen — the gods may not save you, but they can grace you with some glimpses of beauty on your way down. 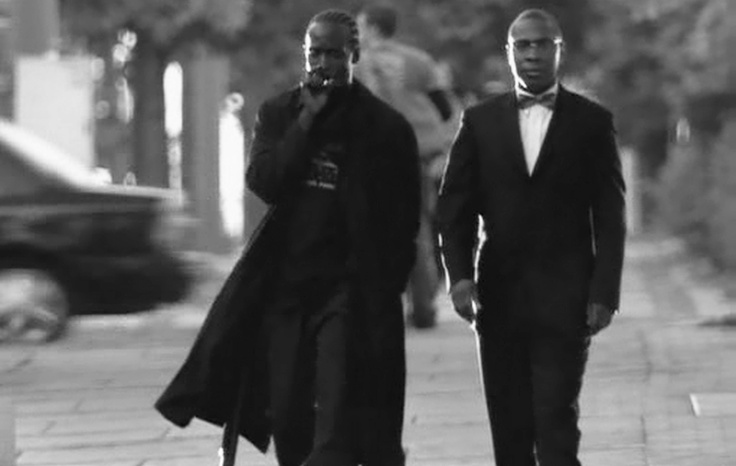 Filed Under: TV, The Wire, The Wire Wednesdays, ,