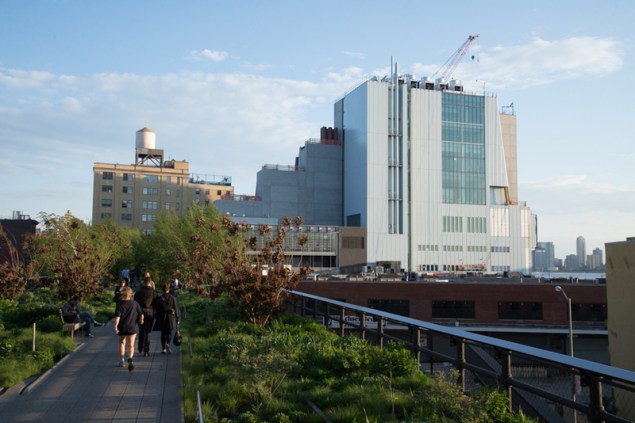 The new Whitney building is on Gansevoort Street in Manhattan’s meatpacking district, adjacent to the High Line. (Courtesy Whitney.org)

The art world calendar is a loud and colorful one, with blockbuster museum shows jostling for attention with biennales around the globe, the all-out spectacle of major art fairs, and the spot-the-billionaire game played at megagallery openings. He’s a small list of a few things we’re looking forward to at museums. Start getting excited, and exhausted—as always, there’s so much stuff to do this year.

“Represent: 200 Years of African American Art” at the Philadelphia Museum of Art, January 10 through April 5
Drawing on the museum’s impressive collection of African American art, the show will include 75 artworks from 50 artists, contemporary painting to the historic decorative art—some pieces date back as far as 1802. Look for the keystone of the collection, Henry Ossawa Tanner’s The Annunciation, a spectacular oil painting done in 1898 that was the very first work by an African American artist to be acquired by the institution in 1899, and kicked off its unparalleled collection.

“Freedom Journey 1965: Photographs of the Selma to Montgomery March by Stephen Somerstein” at the New York Historical Society Museum and Library, January 16 through April 19
Physicist Stephen Somerstein was a college student and amateur photographer when he marched alongside activists in Alabama in January 1965. Not only did he participate in the historic event now depicted in a major feature film starring David Oyelowo titled Selma, he also took some of the most striking and historically significant photographs of the voting rights march to date. The 55 photos were first exhibited in 2010 at the San Francisco Art Exchange, and come to New York in time for the 50th anniversary of the five-day march. 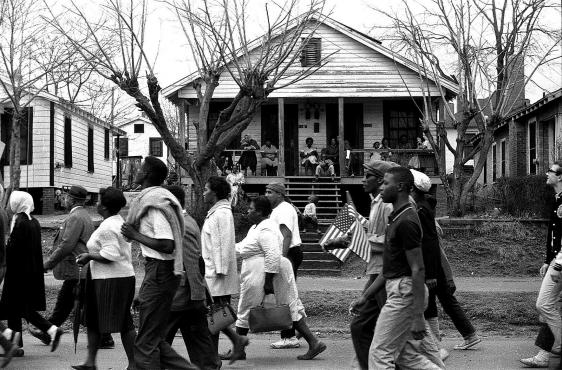 Photo of marchers on the way to Montgomery as families watch from their porches, by Stephen Somerstein. (Courtesy NY Historical Society)

“On Kawara—Silence” at the Guggenheim, February 6 through May 3
The passing of On Kawara last summer makes the title of his comprehensive retrospective at the Guggenheim—the title is “Silence”—all the more tragic. The reclusive artist did agree to collaborate with the museum before his death, so we can be comforted by that, and be dazzled by the way his quiet but gut-punch heavy work take over the Frank Lloyd Wright rotunda. Kawara, a Japanese-born artist who lived in New York much of his life, spent his long life devoting himself to endurance projects such as One Million Years and Today. 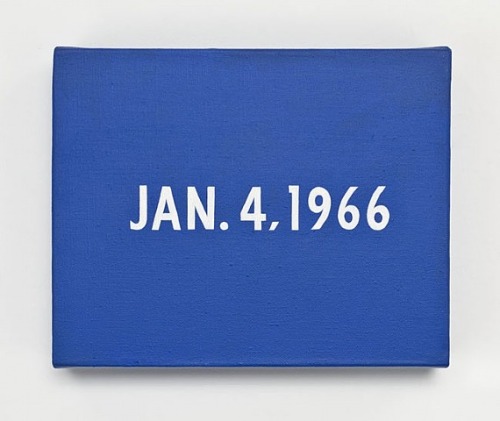 “The Triumph of Love: Beth Rudin DeWoody Collects” at the Norton, February 8 through May 3
Beth Rudin DeWoody, an influential collector and resident of both New York and West Palm Beach, is ubiquitous in the art world, friendly, and genuinely excited about art. (In 2012, at the Norton, she inaugurated a $20,000 biennial “Rudin Prize” for emerging photography; Israel artist Rami Maymon won this year.) She’s been on a buying spree, off and on, for nearly 40 years. This Florida show is the first full-scale reveal of what she’s bought.

“2015 Triennial: Surround Audience” at the New Museum, February 26 through May 24
We’ve been looking forward to this year’s Triennial for so long simply because of the combination of co-curators Lauren Cornell and the artist Ryan Trecartin. And so next month we’ll see the trenchant and lightning-quick Deep Web satire of Mr. Trecartin combined with the post-Internet academic stylings of Ms. Cornell, and it will be something to behold. 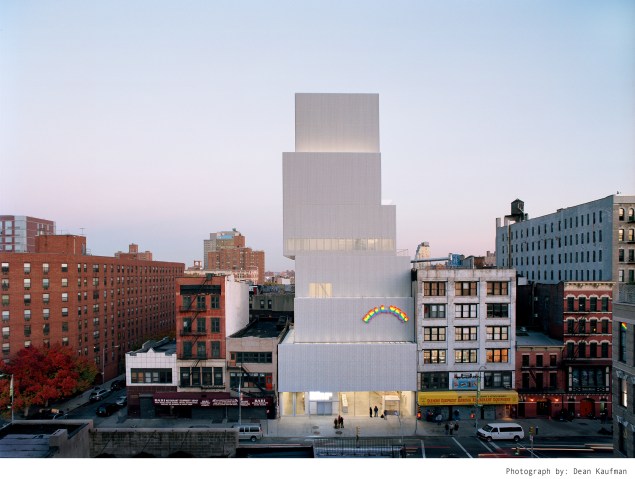 Björk at the Museum of Modern Art, March 8 through June 7
OK, so, we’re not like going to be the first people at the gates of MoMA to catch a glimpse of the Björk show. Not Björk’s biggest fans or anything. But you know what? Color us intrigued. Bjork is among the most bananas of our pop stars, and she’s stayed consistently weird for two decades. So, even if you can make the argument (and you can) that Björk doesn’t exactly deserve a retrospective at the world’s most revered institution of modern art, everyone will be talking about it. 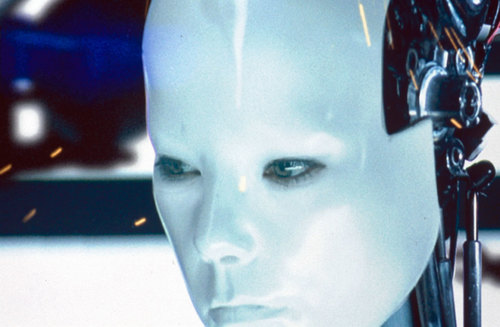 Still from the “All Is Full of Love” music video. 1999, directed by Chris Cunningham, music by Björk. (Courtesy of One Little Indian)

“Fatal Attraction: Piotr Uklański Photographs” at the Metropolitan Museum of Art, March 17 through August 16
Polish-born, New York based Piotr Uklański first garnered attention with his 1996 installation Untitled (dance floor), a minimalist sculpture in the form of an illuminated disco floor, but this will be his first ever American survey of his photographs. Do not miss it. While his name is perhaps not widely recognized, many of his projects have gained public attention beyond the art world, such as his mural Untitled (John Pope II) that became an impromptu memorial following the leader’s death in 2005. His long-running series The Joy of Photography (1997-2007) will comprise the majority of works on view, along with his portraits of art dealers and collectors, and the 164 headshots from The Nazis (1997). Mr. Uklański will concurrently be curating an “artist’s choice” exhibition of 30 artworks from the museum’s permanent collection in the Howard Gilman Gallery.

“One Way Ticket: Jacob Lawrence’s Migration Series and Other Works” at the Museum of Modern Art, April 3 through September 7
Painted by Jacob Lawrence in 1941, The Great Migration Series consists of 60 small tempera paintings that chart the historic move of African Americans from the rural South to the urban north around 1915. For the first time in 20 years all of the panels will be reunited from the Phillips Collection and MoMA and shown together. Also touching on the theme of migration, the exhibition will include poems from writers such as Langston Hughes and Richard Wright, music by Duke Ellington, photographs by Dorothea Lange, and paintings by Romare Bearden, Charles White, and more.

Whitney Museum of American Art, Reopens May 1 on the High Line
It’s more than just about a new building. The Whitney’s relocation is an urban-planning maneuver, a challenge to New York’s museum hierarchy and a bid to create something of an Epcot Center for hipsters on Gansevoort Street. On May 1, it’s new Renzo Piano-designed headquarters will open to crowds and critics. Expect nit picking from the Breuer loyalists, but at least it will have masterpieces and gorgeous river views on its side.

“Revolution of the Eye: Modern Art and the Birth of American Television” at the Jewish Museum, May 1 through September 15
The Jewish Museum takes a look at the intersections of modernist art and design during the 1950s and 1960s and the rise of American television through artworks by Saul Bass, Alexander Calder, Allan Kaprow, Andy Warhol and shows like Batman, The Ed Sullivan Show, The Ernie Kovacs Show, The Twilight Zone, and more. This pop culture-filled historic show also puts the spotlight on Jewish artists and television icons who were at the forefront of this golden era.

“China Through the Looking Glass” at the Metropolitan Museum of Art, May 7 through August 16
This ambitious and inventive show will be exhibited not only in the Anna Wintour Costume Center, but also in the museum’s China galleries. Blending film, costume, decorative and fine arts, it will look at various eras of Chinese history and fashion: the Imperial age, Shanghai between the World Wars, and the People’s Republic of China, among them. Sponsored, intriguingly, by Yahoo, Condé Nast and private Chinese donors, the show’s so likely to be popular the Met is recommending visitors buy admission tickets ahead. 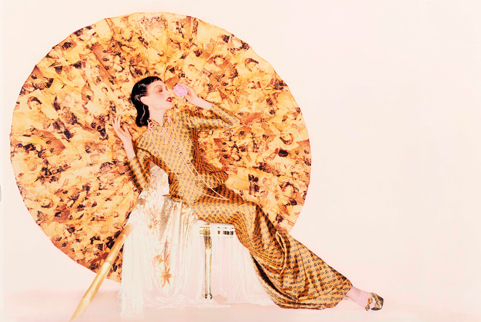 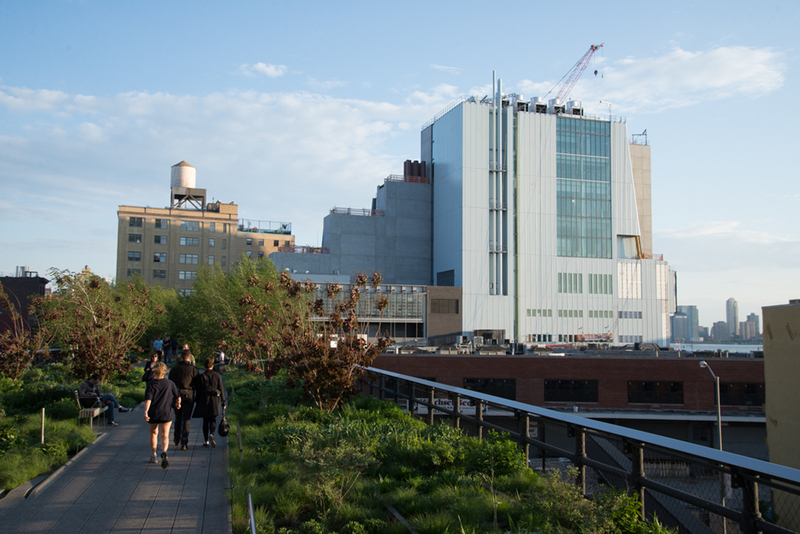