There’s a term, “basic,” that all the kids were using about six months ago. It was a derogatory term for the “obscenely obvious,” characterized by Pumpkin Spice lattes and various kinds of bitches. I never really got the whole “basic” thing, not just because I love Pumpkin Spice more than anything, but because I refuse to adjust to a world where normal is the absolutely worst thing for a person to be. Like, you know what else is “average” or “basic” or what have you? The pretty universal desire to be loved and comforted. Being a teenager is basic. Being an adult is basic. Being married is basic. Being single is basic. Being employed is basic. Being unemployed is basic. You see what I’m getting at: stripped down to a daily recap, your life would probably sound incredibly boring. Except it’s not. Even when it is.

Togetherness, HBO’s new comedy from the Duplass Brothers is exactly as mellow as it sounds. Snuggled in with Looking and Girls, you might have missed it last week because of the Golden Globes, but you’re sure to have heard the Duplass name before: they’re (two of) the guys behind the mumblecore film movement, Jay plays Josh on Transparent, Mark is in The League, they can both be found on The Mindy Project playing passive-aggressive male midwives, etc., etc. You get the drift. Their aesthetic as filmmakers has been called “glacial” by some, who probably won’t be swayed by any description of this show.

In Togetherness, Mark stars as Brett Pierson, a vaguely discontent sound engineer in LA who wants his wife to have sex with him. Melanie Lynskey, who I will never stop thinking of as Kate Winslet’s weird, murderous soul mate in Peter Jackson’s Heavenly Creatures, plays Michelle, the wife, who herself is vaguely annoyed at her husband’s vagueness. If the show was just about them, it would just be a PSA on why new parents should all be put on Prozac. But then there’s Amanda Peet as Tina, Michelle’s sister, who isn’t vague at all, except with her life plans, and Steve Zissis as Brett’s actor friend Alex, who is overweight, balding and considering giving up his career so he doesn’t have to suffer the indignity of auditions for hemorrhoids commercials (to play the hemorrhoid, allegedly) and roles like “hot dog vendor.”

In the pilot, both Alex and Tina move in with Brett and Michelle, because both of them are sort of unmoored, professionally and romantically. So what better place to figure your shit out than at the house of some new parents? Despite this weird arrangement, Michelle and Brett seem to welcome the interruption of their daily routine, because neither of them knows exactly what’s wrong in their marriage but something is obviously up.

“Why don’t you want to have sex with me?” Brett asks at the end of the pilot.

“I don’t know,” answers Michelle, who seems as sadly bewildered as her husband.

If these characters were on GIRLS or Looking or Shameless or Episodes or whatever else you have DVR’d on Sunday nights these days, Michelle and Brett and Alex and Tina would be pathetic; their sheer ordinariness of these middle class, white people’s lives in a city defined by its glamour would either be a statement or a rebuke of one. But instead Togetherness feels more like a low-key spinoff of Transparent, a show that felt like a revelation not just because of its subject matter, but how characters approached it. They weren’t just careening from conflict to conflict like pinballs; they were organically growing and shifting and transitioning. They were flawed, but as a family, the Pfeffermans loved and were loved. And what is more normal than that?

While the issues tackled in Togetherness may be more commonplace than those found in Transparent, they are given the same empathetic treatment as Maura. But it’s hard to talk about a show that brings to mind adjectives like “normal” and “real” and “relatable” and “accessible,” because at this point its all coded language for the mainstreaming of art. Something, in another words, basic.

But this is the opposite: a piece of art that uses its quintessential-ness for quixotic goals. Namely: having a safe space to explore some issues that we are all, at some point or another, going to face in our lives. Sure, new parents feel bored and stressed and family can make you claustrophobic and depression can render the best of us into “beached whale situations,” as Michelle delicately puts it. Your sex life can sputter. Your boss can hate your coyote noises. But even while floating through the tediousness of everyday life that most programs would cut for time–Michelle singing to herself with earbuds in while trying to put on stockings, Tina and Alex working out in the living room– the show remains relaxed and intimate. It’s vibe isn’t hostile, and it’s not meant to provoke. I doubt the show will warrant the amount of think pieces that, say, GIRLS does. But the beauty of Togetherness, I’d argue, is how comfortable it is not being like the other prestige shows that surrounds it. It’s warm embrace of the normal is exactly what makes it a completely novel viewing experience. You don’t need to take a Xanax before watching it. You don’t need to take notes or read recaps. You can just…enjoy it. 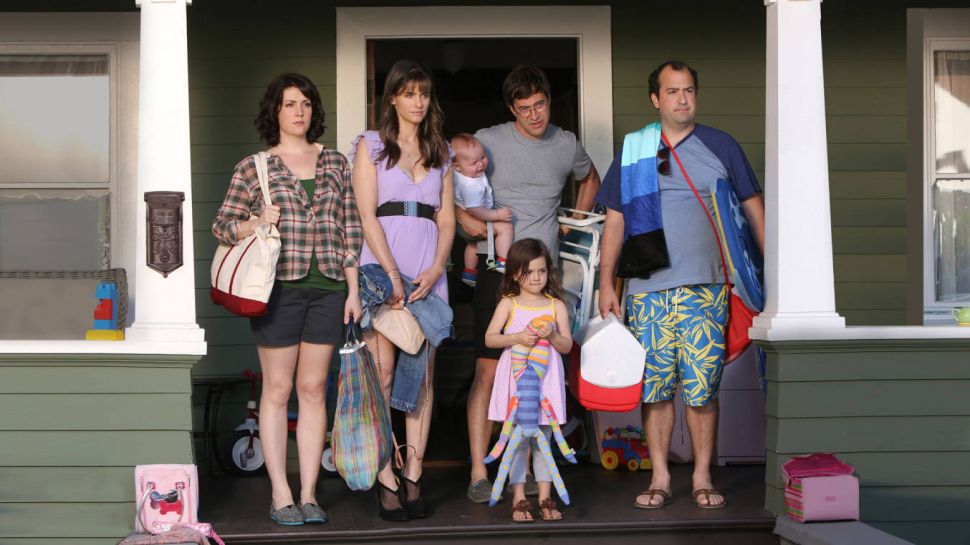