Winning Last Chance Kitchen means you’re fighter. Sure, you’ve been knocked off the show before—but in a way, isn’t that an advantage? Haven’t you perhaps learned what not to do, and then honed your skills over and over as you try to claw your way back into Top Chef?

It was so for Kristen Kish, who fought her way past five people in Last Chance Kitchen to ultimately win Season 10 of Top Chef. And perhaps, this season, it will be so for Doug.

Yes, Doug is our winner of Last Chance Kitchen, beating George who already came back from elimination once and whose luck has run out. And boy does Doug come out swinging.

In the Quickfire, challenged to cook something yummy with tart prickly pear, he presents a veggie-focused dish—stepping on Melissa’s usual turf, I suppose—wowing Padma and the guest judge and winning, despite all the chefs doing a pretty solid job, except for Mei who overcooks beef.

Sidenote: Melissa makes a ceviche and the guest judge notes that the liquid in a ceviche is thought to be an aphrodisiac. “I’ll let you know how that goes later tonight,” Padma says. I like raunchy Padma. First she’s joking with Rob Gronkowski about needing a big sausage and now this. It’s weird but I’m into it (don’t act like you aren’t).

Doug wins, and probably already riding a high from winning Last Chance Kitchen, he gets first choice among the eliminated contestants for his sous chefs. He picks Adam and Katsuji, of course. The sous chefs don’t turn out to be that important, but it is fun to see them, and Adam and Katsuji end up providing a lot of moral support for Doug while he freaks out over his dish in the elimination challenge. Also, it was pretty fun to see Aaron not get picked by anyone.

The elimination challenge requires the chefs to meet with local artists and then cook a dish based on what they paint. Gregory gets an artist who paints a peasant worker in a yellow field, and makes a dish of beef with orange and tamarind sauce that looks a lot like the painting and is delicious. Doug gets an artist who makes very straightforward art reminiscent of Mexican pyramid walls, and he copies it nearly exactly—using the exact same colors and organization in plating a dish of beanless Texas brisket chili with a cheese cracker and tomatillos. Mei gets a way-out-there artist whose canvas is a burst of color, and creates a plate of raw fish and cooked chicken skin that presents a sparse interpretation of the big color and chaos. And Melissa gets a graffiti-style painting of a gray house bursting out of a blue and pink backdrop. She wanted to make pink octopus and squid ink pasta, but can’t get the ingredients. She settles on a smoky eggplant ravioli with some shrimp for pink color.

Sidenote: After eating, Padma beckons the judges to the judge’s table. “Can we have more tequila?” asks everyone’s favorite judge, Gail Simmons. “Yes we can,” Padma tells her, putting her hand on Gail’s back. Is Padma/Gail fanfiction a thing? Never mind, forget I asked about it.

Doug worries his dish is too simple—he gets into the finals and cooks chili?—but he’s cooking what he knows and what he loves, with his art teacher mother in mind. Tom tells him sometimes you just get inspired to cook what you love, and it’s the best cooking you do—and for Doug, it’s enough to win, capping off a truly incredible comeback episode.

Gregory is also safe, which leaves Melissa and Mei on the bottom. The judges weren’t crazy about Mei’s presentation, but they did love her food. They felt like some of Melissa’s stuff was just on the plate for show…and it was, because they told the chefs the food had to look like the painting!

Melissa’s dish was pretty great but the other three were better, Tom says, and Padma tells her to pack her knives and go.

And then were three, and for the second time after George’s surprise return, a nice shake-up of the present crowd to go along with it. I expect a lot of people to be on Team Dougie. 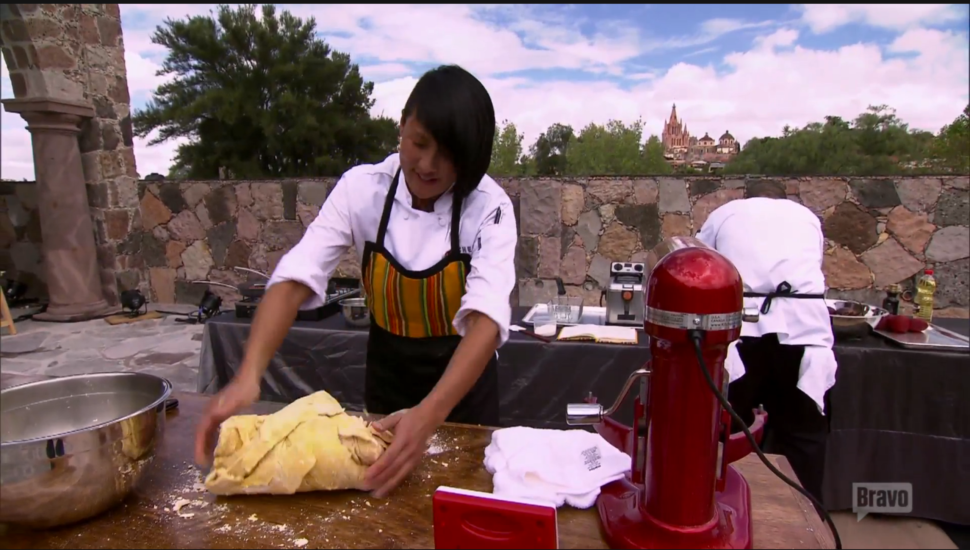