YOU’RE GOING TO COLLEGE TO STUDY … ACTING?” It used to be a parent’s worst nightmare to have to utter that dreaded phrase, especially in New York, where it conjures up images not of Broadway stardom, but $40,000 Tisch tuition, paid off with a lifetime of tip money. After all, traditional theater degrees focus on just that: acting for the theater, an increasingly arcane form of employment in the 21st century.

But hand-wringing parents rejoice! With the rise of actors like Ben Sinclair, whose web series High Maintenance is a hit for the Vimeo crowd, some drama students are now looking for more than a lifestyle. Which is why Pace University has created a program, now in its second year, for actors whose idea of a “career plan” has more stops than Steppenwolf.

Enter Brian Hastert, who you might recognize from his roles on The Good Wife, or perhaps just from that Playstation 4 commercial that was all the rage last year (he can be seen sword-fighting while singing along to Lou Reed’s “Perfect Day”). The actor/director/producer is heading up Pace University’s new performance program, Acting for Film, TV, Commercials and Voice Over. With curly brown hair and a lopsided grin, Mr. Hastert doesn’t look much older than some of his students, a fact not helped by Mr. Hastert’s ensemble of jeans and a T-shirt bearing the visage of Milhouse from The Simpsons. But don’t let his boyish looks confuse you: with an M.F.A. from Yale School of Drama and with many IMDB credits, Mr. Hastert knows firsthand what makes the program he conceived so unique.

“We are the first school to offer a B.F.A. in acting for film, television, voiceovers and commercials—and not theater. And it’s an accredited program,” Mr. Hastert said over coffee at a bistro near Pace’s lower Manhattan campus.

Sometimes that means reconditioning his students from Day 1, to perform scenes less focused on “playing to the back of the room,” he said. “When you are training for the stage, there is a tendency to pull people towards slightly larger choices.” With any other form of acting, he said, “There’s only one audience with a camera, and it has a front row seat. It’s probably not much more than 10 feet from your face.”

It’s not only the degree that’s unique: Mr. Hastert’s approach to teaching involves commissioning seasoned playwrights to write web series, which his students then star in. “It doesn’t make sense to do plays and musicals like traditional theater programs do. It needs to be practical work,” he explained.

Mr. Hastert recently released the first two series featuring his second-year students on Vimeo: Drunk Art Love by playwright Crystal Skillman (King Kirby), about art students pulling an all-nighter before their finals; and the more ominous Campus Tour by Caroline V. McGraw (The King is Dead), where a prospective student is guided around the grounds of a teacher-less school.

Though the program hasn’t been around long enough to offer classes for juniors and seniors, Mr. Hastert said the last two years of the program will focus on having students audition for real gigs.

“Acting can be a career if you aren’t above doing television or voiceovers, commercials and the like,” said Mr. Hastert, whose curriculum isn’t for kids looking for an easy A, but includes classes on the Alexander Technique, as well as vocal training and “physical prep” sessions taught by a former Marine, where the goal is to push students beyond their limitations. “It’s about being comfortable with discomfort right away,” Mr. Hastert explains. “Physically attacking that is the closest way in. Emotional discomfort, we’ll get to that
later.”

Sophomore Jordan Lemmond Current praised the curriculum, disagreeing with the trope that theater is the “actor’s medium,” while TV and film are for producers and directors. “I actually feel a lot freer doing stuff on camera than I do in the theater,” he said.

“The cold hard truth of it is you are going to be doing 90 percent of your acting in the audition room. And you’re not going to get paid,” Mr. Hastert concluded. “If your only desire is to make art, you need to be aware you’re going to make significantly less. If that’s your only goal, it’s hard to sustain a life like that.” 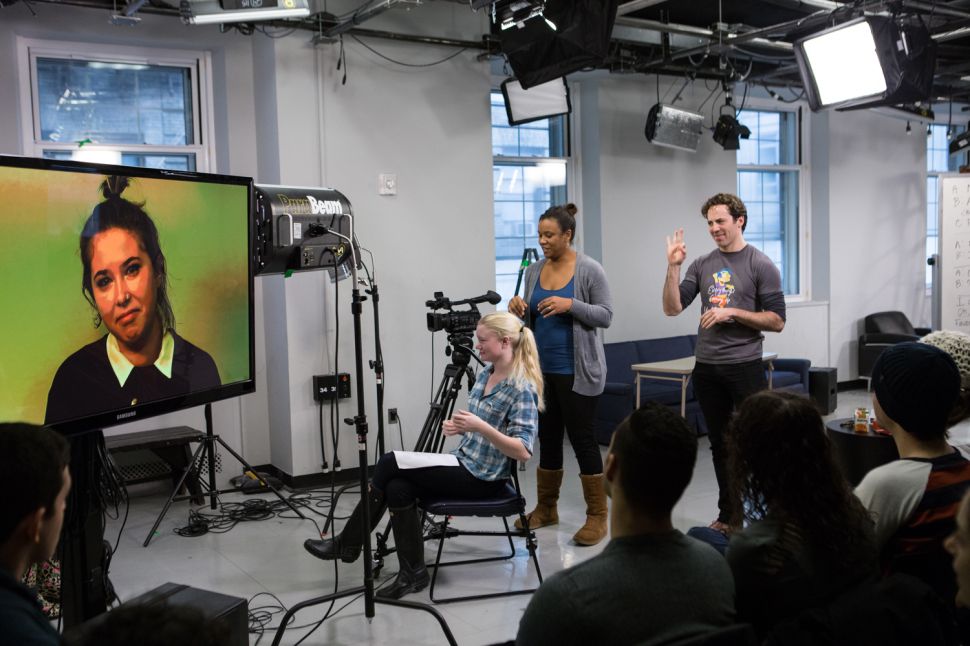