So David Duchovny and Gillian Anderson have sort of, maybe confirmed the hypothetical return of Chris Carter’s The X-Files on Fox. Dorks everywhere are flipping out because where there’s a smoking man, there’s fire.

To be fair, the soundbites from Fox execs make it seem like they are playing it cool, if “cool” meant a lot of double-talk.

Fox TV Group chairman Gary Newman today confirmed chatter that the network is in talks for a new installment of Chris Carter’s cult supernatural drama, which starred David Duchovny and Gillian Anderson. Newman went on to say he was “hopeful” about the outcome.

It’s weird to “confirm” that a show is “in talks,” which is the studio equivalent of President Obama confirming that David Mitchell is his bro. It might make for some good Reddit conspiracy fodder, but ultimately it’s all just clickbait until a deal is signed.

But wait, Deadline’s story gets better.

Later, fellow Fox TV Group chairman Dana Walden said that the conversations so far have been only logistical, looking at windows when the key X-Files players, creator Carter and stars Duchovny and Anderson, are available. She confirmed that a potential X-Files followup will star the original leading duo of Duchovny and Anderson. There have been no creative discussions yet about what that new series might be.

So, to summarize: the iconic supernatural show MIGHT not be happening. But if it IS happening, they can confirm that the two famous people would take time off their busy schedules to take part.

Anderson also can’t stop obsessing over the show that launched her career. On a Nerdist podcast last week, she threw down the gauntlet.

“Should Fox do anything in their power to make it happen?,” Anderson asked at one point. The response is overwhelming. And that hashtag we put up there at the top of this piece? It’s real. Tweet it from here to eternity, and make your voice heard!

We are optimistic, but only barely. First of all, Duchovny’s already got that Manson show, Aquarius, coming out soon. And Anderson is flying off with her former therapy patient/ sociopathic cannibal, Hannibal Lecter. So they ARE busy.

But secondly…we subscribe to the belief of once bitten, twice shy. As much as we want another reboot of The X-Files, ask yourself: how excited were you when for 1998’s The X-Files: Fight the Future? And how crushed were you when it wasn’t everything you hoped for and more? And wait, was that more or less disappointing than the totally unnecessarily SECOND X-Files movie in 2008 (The X-Files: I Want to Believe)? Sure, TV is a different medium than film, but the television landscape is so different from what it was when X-Files was in it’s prime; the only show worth talking about in AOL chat rooms. If this show goes through, X-Files will be under even more scrutiny to achieve not only the brilliance of the original series, but to avoid any negative associations it has with its film franchise. It’s kind of doubly-fucked, right?

Although hey, we’re living in a time when Fargo and Hannibal and 12 Monkeys have rejiggered their famous cinematic urtext into a TV-friendly format, so I’m sure the X-Files can pick up its TV cred again just as quickly. Though, never forget:
[youtube https://www.youtube.com/watch?v=-LzhT7WGy6I]

THE X-FILES CAN PREDICT THE FUTUUUURE! 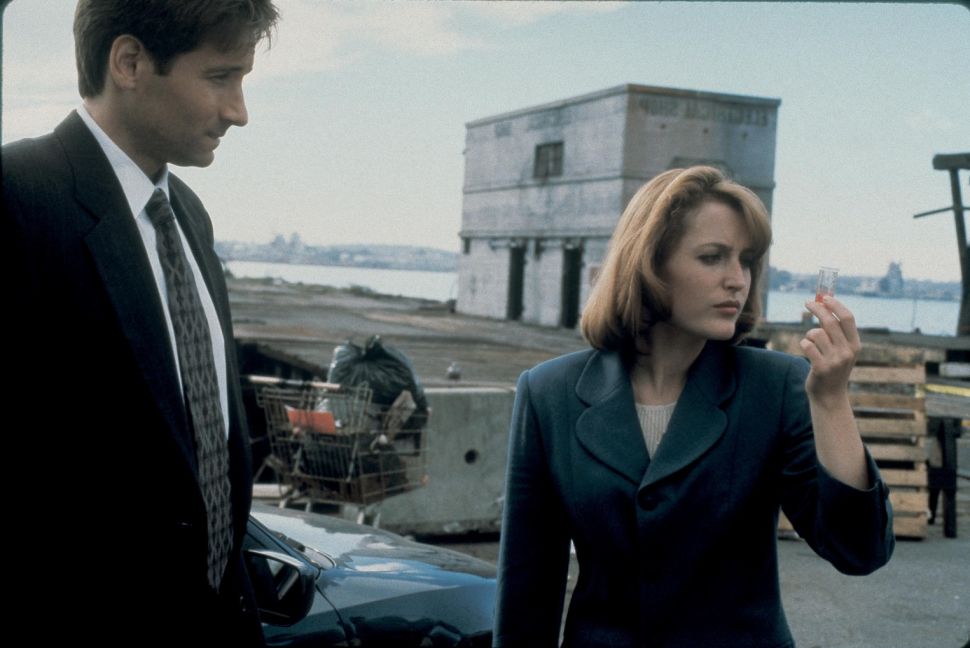