There’s no denying that America has moved on. The fear mongering news segments have subsided, no one in the U.S. is infected and our country is not at risk. Ebola just isn’t on our minds any more.

Yesterday afternoon, a 14-year-old Ebola survivor from remote Libera named Mohamed hosted a Reddit AMA where he bravely discussed the loss of several close family members and his own struggle to survive.

To the many of us whose Ebola exposure has been no more than news articles, hazmat suit Halloween costumes and jokey Ebola T-shirts on Etsy, this Reddit AMA is an important reminder that the disease is continuing to take thousands of lives in West Africa. In Mohamed’s homeland of Liberia, more than 3,600 have died, according to the CDC.

Unlike most AMAs, this one sparks emotions in its readers. The answers–typed by two individuals from Save the Children but from the words of a boy only in his teenage years–are short and sincere. Here’s a few of the questions and Mohamed’s answers:

How did you get Ebola?

My elder sister got sick in Monrovia. When my sister passed away my grandmother also got sick because she was taking care for her. My father went to bring her his mother to Bong where I live as he wanted to take care of her. During that time we ate together and that is how I got infected.

Are you reunited with your family and loved ones now?

I lost my sisters, grandmother and stepmother. But I am reunited with the rest of my family.

How bad did you feel during the course of the illness? Was it the worst pain you’ve ever experienced?

It was my first time experiencing this type of sickness. It was very bad because I experienced all the symptoms: vomiting, diarrhea, loss of appetite, headache, weakness, no sleeping. I had never experienced all of these things together and it was very painful.

How did it feel to be quarantined?

felt bad about myself. Because I needed help but I could not get help from my family or others that were close to me. I only got helped by strangers.

How long were you in quarantine?

one month and fifteen days

How long were you treated? How did they treat you?

They were giving me pills, checking my blood, anything I needed they brought to me and they would talk to me and comfort me.

Could you hug your parents and get physical comfort from them, or did you have to refrain from touching other people due to contamination risk?

No I was not allowed because I was sick.

I think the people who made the certificate made a mistake. (note: people get ages wrong very often in Liberia)

What kept your spirits up while you were sick?

I was praying everyday that I would survive.

Almost all questions were directly related to Mohamed’s personal fight against the disease, but when one Redditor inquired to his favorite flavor of ice cream and he replied “I don’t know ice cream,” the readers got a dose of perspective. They also began brainstorming how to get this brave young boy some ice cream. 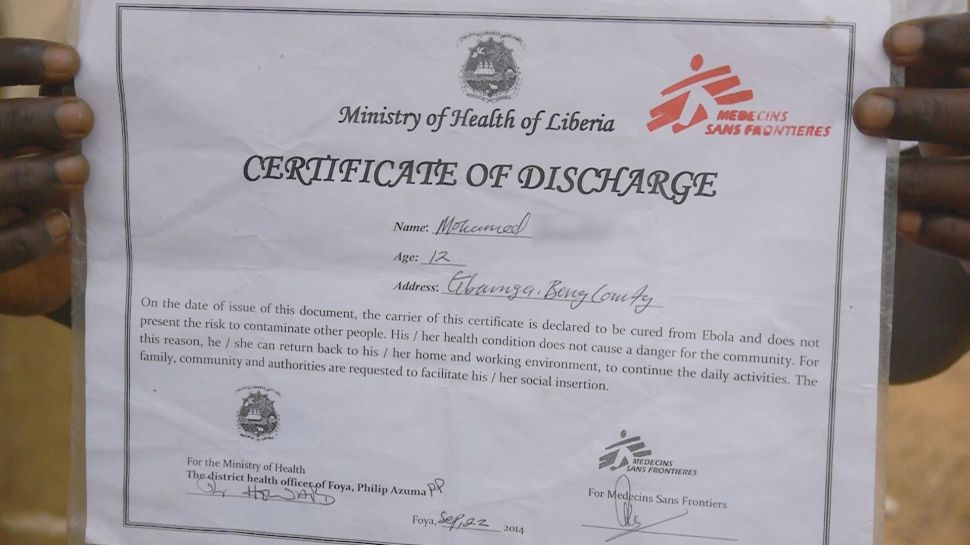