It may have been an aberration from what has been an otherwise meaningful movement, but last weekend, “Black Lives Matter” protesters in Portland, Oregon, risked turning a powerful national protest into a disorganized distraction.

At a town hall meeting, a 100-year-old U.S. Navy veteran, Dario Raschio, was due to receive medals for distinguished service in World War II. Senator Ron Wyden stood to praise Mr. Raschio’s record of service but was interrupted when protesters pushed into the room and began shouting “Hands up, don’t shoot!”—one of the rallying cries of the “Black Lives Matter” movement. As reported by The Oregonian, this went on for some time before the Senator persuaded the crowd to calm down.

When Mr. Raschio was given the mic to speak, the protesters renewed their chants. “Give me a chance,” Mr. Raschio pleaded. “Let’s show a little respect for this occasion.”

Born in 1914, Mr. Raschio gave up dreams of medical school to care for his ailing mother. Denied public school teaching jobs because of his Catholicism, he signed up for the Navy in 1941. He proposed to the love of his life in a letter from his base in Florida, promising her “the most expensive ring Woolworth’s has.”

In the war, he flew floatplanes, a frequent target for Japanese guns. And sure enough, on Easter Sunday 1944, he took heavy fire and crash landed in the South Pacific. Floating in the , far from his carrier and tossed away from the floating wreckage of his plane, he accepted his death with equanimity and prayer. But a Navy destroyer rescued him. The sailors had seen Mr. Raschio and his crewmate bobbing on the waves–and seen the shark circling them below the surface.

Mr. Raschio returned home to Oregon and finally landed a public teaching job. To pay the bills, he sold clothes in the evening and painted in the summers. He fathered three children, became an usher in his local church, and built by hand the house he still lives in. In a 2005 profile, a leader in his church described the then 91-year-old Mr. Raschio as “the kind of very real, good and faithful servant we all aspire to be.”

The town hall ceremony, then, was a kind of coda to a life well and humbly lived. He was to be given seven service medals and a flag flown above the Capitol. His family and friends were in the audience. A United States Senator was the master of ceremonies. But for all the pomp and circumstance, at an event designed to pay tribute to his life, Mr. Raschio was all humility: “I feel I’m no hero. I don’t accept it as being a hero. I accept it as being a part of my job.”

That kind of life carries a powerful moral force—the kind of force that “Black Lives Matter” protests around the country ought to emulate rather than interrupt. The whole purpose of civil disobedience, after all, is to win a moral struggle. It isn’t to disrupt the public for disruption’s sake. It’s to awaken a crisis of conscience—a lengthy and difficult process that requires a great deal more than mere interruption.

In fact, the best protest organizers are more at home in a boardroom than a drum circle. They employ steely strategy, possess a keen sense of the public mood, and handle the media with deftness and discipline. They show restraint and circumspection, choosing their agenda and their objectives with military precision. Their actions are tempered and targeted—not disruptions of any and every public gathering, especially not of the kind meant to honor hundred-year-old card-carrying members of the Greatest Generation.

Of course, one incident doesn’t discredit an entire movement, but it does raise an important and urgent series of questions. What will “Black Lives Matter” stand for and accomplish? Will it be sporadic or strategic? Will it find and develop skilled organizers, a plan of action, a media strategy, a way to sustain for months and even years the attention it has aroused, a way to convert that attention into policy change? Or will it simply put on public displays of aggravation until its followers grow tired and the moment passes?

I write this as someone who believes that the questions that the deaths of Michael Brown and Eric Garner have raised—about prosecutorial accountability and police discretion, among many others—are sober and serious ones. But they demand a movement of equal sobriety and seriousness, and displays of the sort staged in Oregon risk the end of a conversation we desperately need to have. Protest isn’t just grievance, but responsibility—to sustain this conversation and the urgency of this moment. Misuse of that responsibility, fair or not, carries a heavy cost: it can offer ammunition to opponents and sap a movement’s moral authority.

And moral authority is priceless, because Americans have a finely tuned national conscience. It’s why a public that aches for Michael Brown can also grieve for NYPD officers Wenjian Liu and Rafael Ramos. It’s why movie theaters break into spontaneous applause at the end of both “Selma” and “Unbroken.” It’s why a nation that mourns Eric Garner’s death can also praise Dario Raschio’s life. The movements that have succeeded in awakening our conscience have not aimed merely to disrupt, but to call us back to our best image of ourselves.

Dario Raschio’s life is part of that image. For “Black Lives Matter” to matter in the long term, I suspect that the movement will have to treat the values he represents not as competitors for attention, but as powerful allies. 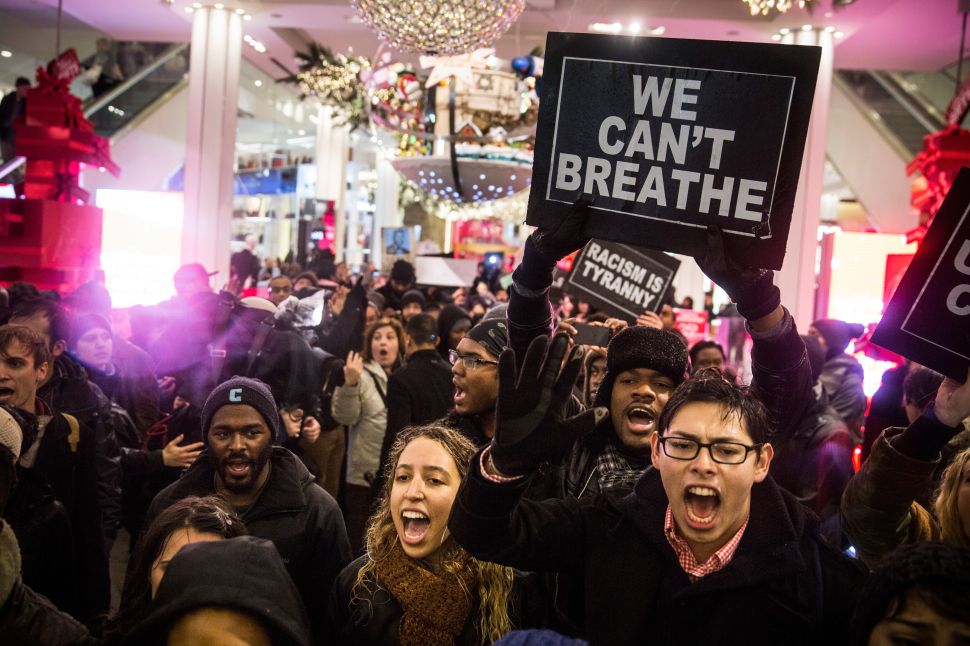