After getting shellacked by Bergen County Democratic Chairman Lou Stellato for his January 15 vote to close the Izod Center at the Meadowlands Complex in his capacity as a board commissioner of the New Jersey Sports and Exposition Authority, Bergen County Republican Chairman Bob Yudin struck back at Stellato, laying the blame for the Izod Center closure on both circumstances and “failed Democratic policies.”

“When the Prudential Center was built in Newark, it didn’t take a rocket scientist to know that building something like that 10 miles away from Izod was going to substantially hurt it. That’s competition,” Yudin told PolitickerNJ. “Then the Democrats dumped the rusting hulk of Xanadu into the lap of [Republican] Governor [Chris] Christie.”

Although the Xanadu nightmare is now scheduled to be transmogrified into a dream, specifically the American Dream Meadowlands project, Yudin defended his vote to close the Izod Center.

“Are the taxpayers of New Jersey and Bergen County supposed to subsidize Izod forever, now matter much money is lost?” Yudin asked, referring to official state estimates that the arena, opened in 1981, is losing between $8 million and $9 million annually. “What I expect will happen is that Izod will open again in some format, and that once American Dream is finished in about two years, they will take over Izod. It makes sense for American Dream to do that since they are right next to each other.

“The whole Democratic Party mantra is spend, spend, spend, tax, tax, tax,” Yudin added. “We have to cut our losses. I’m more in touch with Bergen County voters and taxpayers than Lou Stellato is. He is stuck in the typical Democratic mode of the redistribution of wealth. That’s how you buy the votes so you keep getting reelected. On the Izod Center, the Democrats have to blame somebody, so they blame the Republicans. And they blame me.” 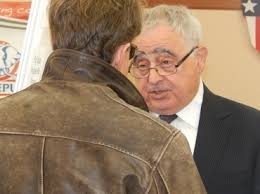