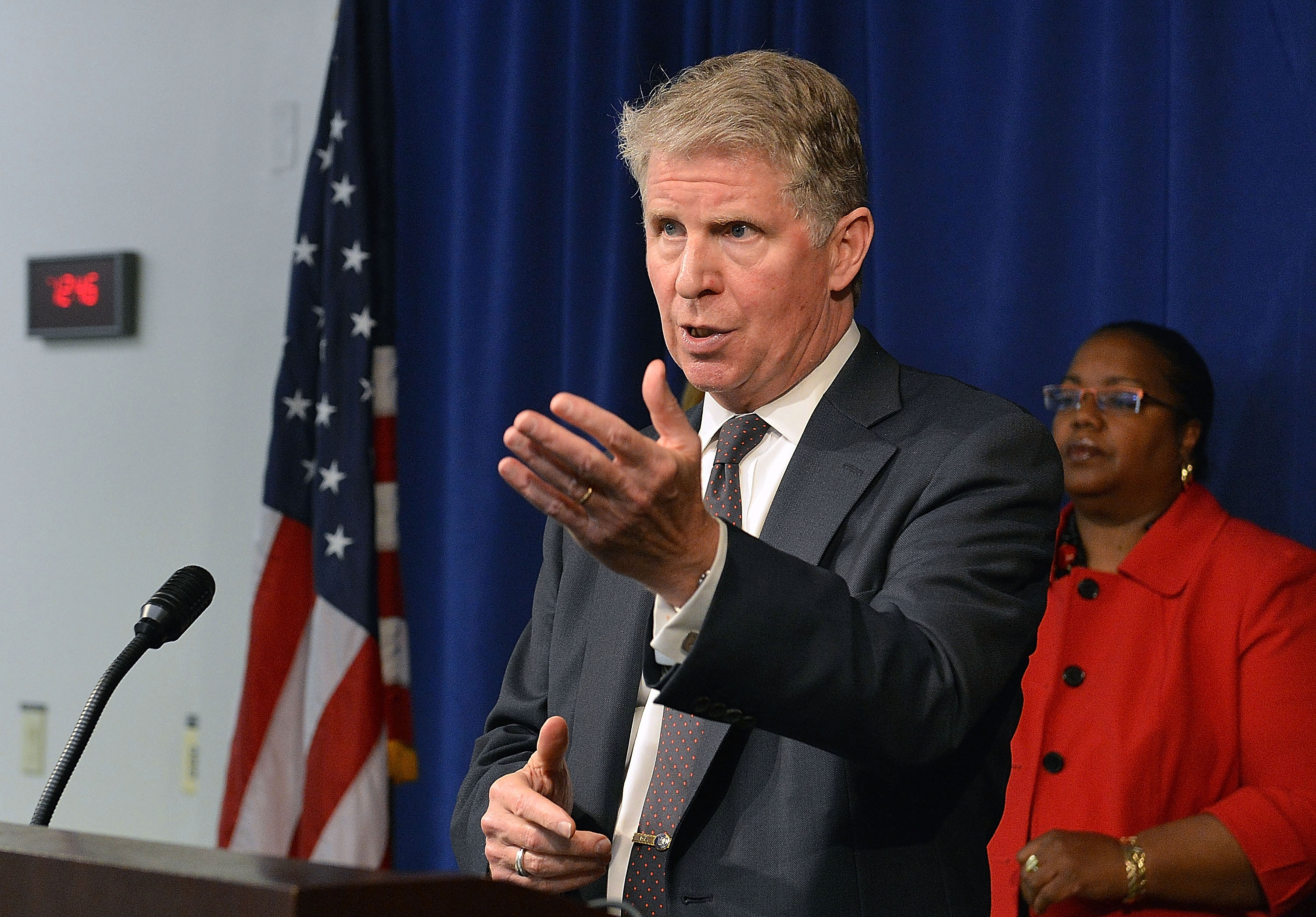 A sweeping corruption investigation led to the indictment of 16 employees in the Department of Buildings and Department of Housing Preservation and Development today, with law enforcement officials allegedly uncovering 26 separate bribery schemes in the departments over the last two years.

“The schemes in this set of indictments are numerous, and the methods of bribery and bribe receiving are diverse,” Manhattan District Attorney Cyrus Vance Jr. said today at a press conference in his office.

The investigation by Mr. Vance’s office, the Department of Investigation and the NYPD led to indictments of 50 people in total: 11 DOB employees, 5 HPD employees, and a slew of private sector real estate and building industry workers charged with bribing the two city agencies, which oversee building safety and affordable housing.

The announcement comes just a week after Mayor Bill de Blasio made affordable housing the centerpiece of his State of the City address—and also vowed vast reforms of the Buildings Department.

Mr. Vance said the city’s booming housing market meant many in the real estate industry were eager to build as quickly as possible, or buy and flip property, a process that “can invite corruption.

“Today’s cases unfortunately are harbingers of other potential casualties of the housing boom,” Mr. Vance said, in an environment that “inspires the taking of shortcuts and, as we have seen so often, the taking of bribes.”

The investigation unearthed $450,000 worth of alleged bribes. One unregistered expeditor is charged with bribing multiple DOB employees, including pay off a Chief of Development with $200,000 in home payments, two SUVs and a Royal Caribbean Cruise, Mr. Vance said. In another case, a building owner bribed a DOB employee to get “ultimately bogus” eviction notices, Department of Investigation Commissioner Mark Peters said.

“The point was simply building owners who wanted to get their buildings emptied out were bribing the Department of Buildings, simply to get the building empty,” Mr. Peters said.

Both agencies noted that the investigations began with someone within each department—at DOB, with an employee coming forward, and at HPD, with an internal audit catching red flags that were passed on to DOI.

Department of Buildings Commissioner Rick Chandler said he was “outraged” at what the investigation had uncovered.

“These accused individuals put their own enrichment ahead of their duty and moral obligation to keep New Yorkers safe. Working with the Department of Investigations, we have re-inspected every property possibly touched by this fraud to ensure their safety and hold owners and contractors responsible for following the law,” Mr. Chandler said. “Since my appointment I have been increasing internal controls at the agency, including the hiring of a Risk Management Officer tasked with strengthening compliance and oversight. I want to make clear that ensuring integrity in the industry will be a top priority of my tenure.”

HPD Commissioner Vicki Been used the same word—”outraged”—in descriving her reaction to the allegations.

“The charges against these employees involve a flagrant abuse of authority for personal gain, and worse, involve violations of the public trust. All of HPD’s employees are entrusted with the honor of serving the people of New York City, and with the duty of ensuring that the City’s low and moderate income households have safe, high quality, affordable homes.  The charges detail behavior that, if proved, is reprehensible.There is no room at HPD for corruption or bribery, and no tolerance for individuals who would abuse their position,” she said.

Mr. Vance said flipping property quickly in a hot market was another incentive for the bribes.

“What’s the point of bribing these officials in the first place? It’s because you can’t sell a property if it has a sitting HPD violation,” Mr. Vance said.

In addition to undermining building safety, the rights of tenants and the public trust, officials said the schemes also undermined a major city initiative—the creation and preservation of affordable housing.

“At a time when the city is desperate for affordable housing, the investigation exposed conversations between buildings inspectors and property owners intending to flip apartments for higher-paying rents, taking homes from lower-paying tenants,” Mr. Peters said.

Since the investigation—which started with a DOB worker coming forward—the Buildings Department has hired a new Chief Compliance Officer, Mr. Peters said, and has also conducted some outside auditing.

Mr. Vance said he was confident safeguards would arise from the case—but pointed out there was no “unifying conspiracy” to the myriad of alleged crimes.

“I think it speaks really to the challenge and the scope of the problem we found which is in many, many separate instances, bribery was being committed,” Mr. Vance said.

Which raises the question of why so many city employees felt, separately, that they would be able to accept bribes.

“I think it’s no secret that we have a large agency with a large number of people who are relatively moderately paid, who have huge individual discretion over large financial projects… that’s a breeding ground for potential corruption,” Mr. Peters said. “Which is why we’ve seen this in the Buildings Department before.”

Even as they said the department would require constant scrutiny to stop employees from committing crimes going forward, neither official recommended major changes at the top of the DOB. Instead, they promised “vigilance” going forward—an area where Mr. Peters allowed, when pressed, that the DOB could have done more in the past.

“This is something that requires vigilance, not only by prosecutors but by agencies. I think they’ve started on that vigilance, but if your question is, if over the past two years while this was going on, could there have been more vigilance? Yes,” Mr. Peters told the Observer. 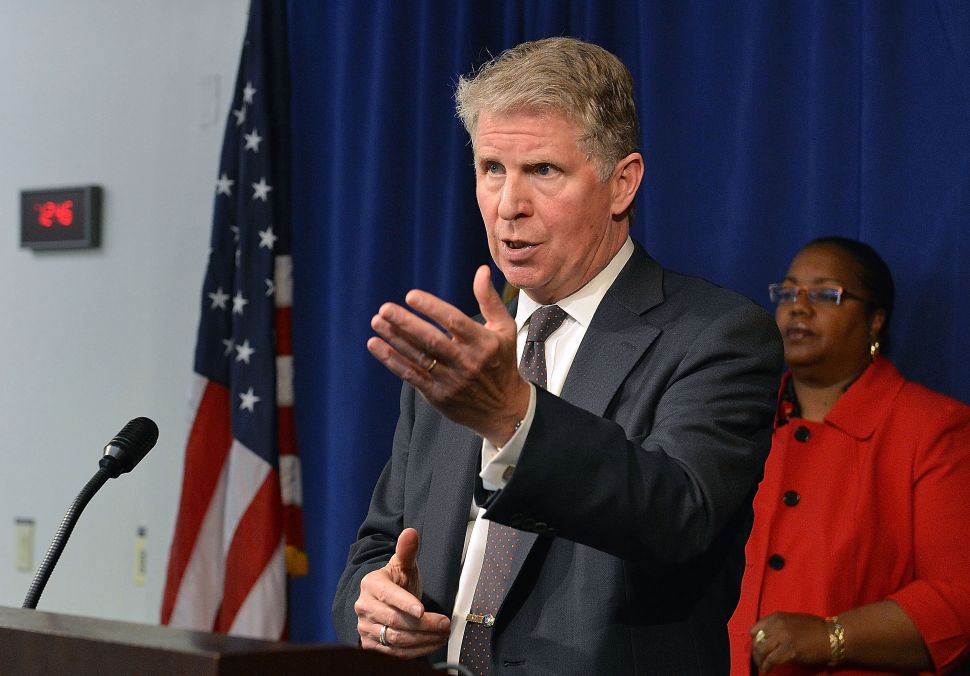