It’s absurd and wonderful that Father John Misty played Valentine’s Day, of all days, at the Bowery Ballroom, on tour for his new release I Love You, Honeybear. Sure, it’s an album of love songs to his wife, Emma, but it’s the kind of romance born of a revelation like “I haven’t hated all the same things as somebody else since I remember” and crooned to a mariachi swing.

What kind of couple goes to see Father John Misty on Valentine’s Day? Or rather, what kind of individual goes by herself, to stand starry-eyed among such couples, unanimously infatuated with the crass mystic otherwise known as Josh Tillman? By the time Misty emerged in black V-neck and blazer to sing the title track, crazy-person skinny and nonchalantly captivating in Jesus beard and hair, I’d already decided I’d be the one he’d watch the ship go down with, Emma be damned.

To watch Father John Misty live is to be entertained. My fellow crowdsmen were all singing along, flush with smiles, too entranced to even makeout with each other—at least not excessively, thank God. His voice is better than you even thought, and it just seems to come out of his mouth, like he’s not even singing. He’s a showman who slings the mic-stand over his head and ends most numbers on his knees. For “Chateau Lobby #4” he brought out a trumpet player in full mariachi get-up. His dance moves are goofy and make you laugh, but actually impressive—skinny boy can shake his bones! Which makes sense for his whole persona: Half in-jest, half-devastating. At one point, a pink balloon from the crowd with the words “I love you” and a couple teddy bears on it floated to the stage, and Misty held it faux-sentimentally.

He performed “The Night Josh Tillman Came to Our Apt” like telling a story, augmenting the best lines with incredulous facial expressions and exasperated hand gestures—“She said that she sounds just like Sarah Vaughan/I hate that soulful affectation white girls put on/Why don’t you move to the Delta”—perfectly capturing the tone of reluctant fondness for the precocious pain in the ass in the song. “Nothing Good Ever Happens at the Goddamn Thirsty Crow” was a country-western lament of a jealous lover, the crowd “ow, ow’d!” at the line “She gets down more than a blow-up doll,” ripe with shit-talking delivered with pride and bluster.

His presence is at times evangelical, which given his upbringing, is probably not so surprising. During “Ideal Husband,” his voice became strained with the song’s confessional litany of sins, actually hitting himself in the head with the neck of his guitar and sinking to the floor with the refrain “I’ve said awful things, such awful things,” his body thrashing around like trying to exorcise some demon. When he climbed off stage and into the crowd during “Holy Shit,” everybody bum-rushed to touch him like he was a holy being. The guy next to me actually groped his hair and beard. Well, if he’s a Father, then we are his cult.

There was little wise-cracking from our elusive frontman; he played a full set of 18 songs, with little time for interjections. There was the amusing guff, “Anybody here at the behest of their partner? Anybody thinking, who the fuck is this guy? How much more of this bullshit music do I have to put up with?” which caused the crowd to erupt in defiant screeches; it appeared nobody was there who wasn’t madly in love with FJM, probably more than with their dates, in some cases.

He hit all the old favorites from Fear Fun (“Nancy From Now On”; “Hollywood Forever Cemetery Sings”; “Fun Times in Babylon”). I was hoping he’d play his cover of Nirvana’s “Heart-shaped box,” (Valentine’s Day! Heart-shaped! Come on!) but he delivered just fine on the dark little number that is Leonard Cohen’s “I’m Your Man.”

Thanks for the lovely evening, Father John. Anytime you want, let’s get weird and talk with the face. Play Misty for me, Misty. 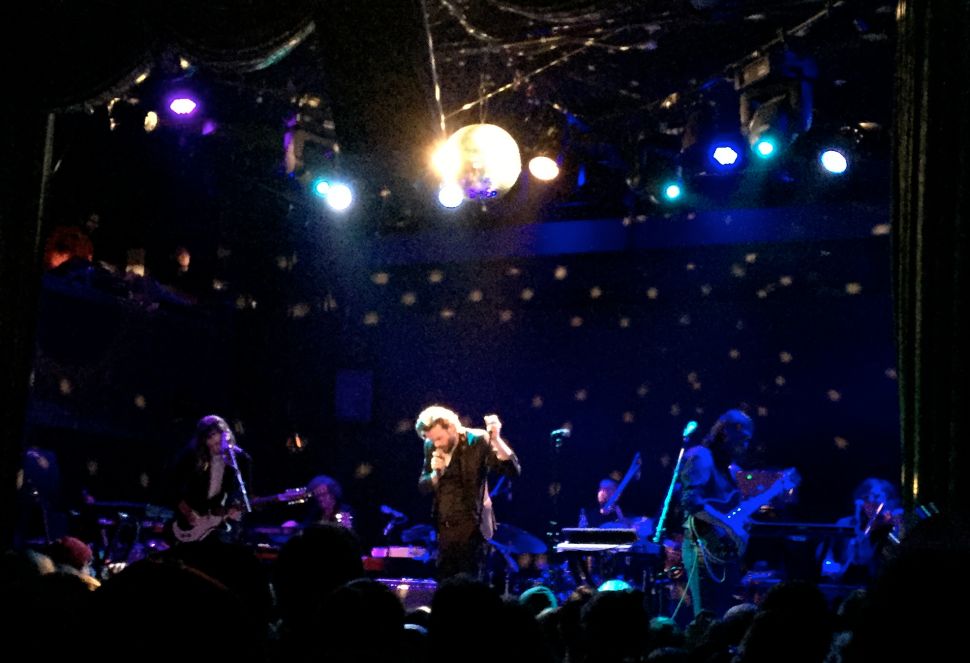