They called it a “glaring omission,” an insult to who they are and what they do.

Anti-police brutality activists blasted Mayor Bill de Blasio this afternoon for neglecting yesterday to mention race and policing issues in his annual State of the City address. Mr. de Blasio, straining to balance the demands of protesters with unrest in the NYPD, ignored the issue entirely in favor of ambitious affordable housing and transportation proposals.

“Yesterday there was a glaring omission–we thought this mayor was committed to this issue. He ran on this issue, in the first few months he dealt with the issue, and now it seems he’s gone silent,” said Michael Skolnik, an activist with the protest group Justice League NYC.

“What we feel happened yesterday is that there was a submission to the police unions, the pro-police groups who continue to vilify the movement, calling us anti-police when all we are is anti-police misconduct,” added Linda Sarsour, another Justice League NYC member and executive director of the Arab American Association of New York.

The press conference, held outside City Hall as a spokesman for Mr. de Blasio, Phil Walzak, looked on, was striking because many of the activists have supported Mr. de Blasio in the past, even meeting with the Democrat in December. Several activists said today they would be open to trying to oust his police commissioner, Bill Bratton, and applying additional pressure on the liberal mayor to bend to their demands.

Justice League NYC, a coalition of influential activists and protest groups, rose to prominence after a Staten Island grand jury failed to indict a white police officer in the death of Eric Garner, a black man. Thousands of protesters jammed city streets and Mr. de Blasio, who spoke often about race and policing issues last year, expressed sympathy for the movement.

But police unions and rank-and-file cops felt Mr. de Blasio was insufficiently supportive of police. The murder of two NYPD officers in late December added more gasoline to the fire, driving a wedge between City Hall and the police and forcing Mr. de Blasio to strike a more conciliatory tone.

The controversy surrounding the mayor and police has receded as Mr. de Blasio promised more money for new bullet-proof vests and to veto a City Council bill criminalizing the sort of chokehold that led to Garner’s death. A real possibility of new contracts for two belligerent police unions, the Patrolmen’s and Sergeants Benevolent Associations, also calmed tensions.

Now Mr. de Blasio appears to be facing a new problem: a revolt from the left. Leaders from groups like the National Action Network and the NAACP, longtime allies of the mayor, expressed frustration today about Mr. de Blasio’s new approach.

Kirsten John Foy, one of Rev. Al Sharpton’s lieutenants at NAN, said he still stood with Mr. de Blasio on issues like affordable housing, but lamented how he had sidestepped race and policing in what many regard as his most important address of the year.

“We are here today to ask the mayor to stand with us on the issue of police and community relations,” Mr. Foy said. “Our city is still hurting, still reeling from the shed blood of innocent police and innocent civilians. We still have a hard discussion to have about how we move forward with accountability, responsibility and improved trust of the community.”

L. Joy Williams, the Brooklyn director of the NAACP, said she was in attendance for Mr. de Blasio’s State of the City address. She ripped it a “missed opportunity” for Mr. de Blasio to outline key criminal justice and policing reforms.

“This message was missing yesterday,” she said. “We are deeply disappointed with the mayor.”

In an interview with radio host Brian Lehrer on WNYC today, Mr. de Blasio defended his decision to focus so squarely on affordable housing at the expense of other issues.

“Ask anybody who represents neighborhoods around this city,” Mr. de Blasio added. “It’s literally the number one thing we hear.” 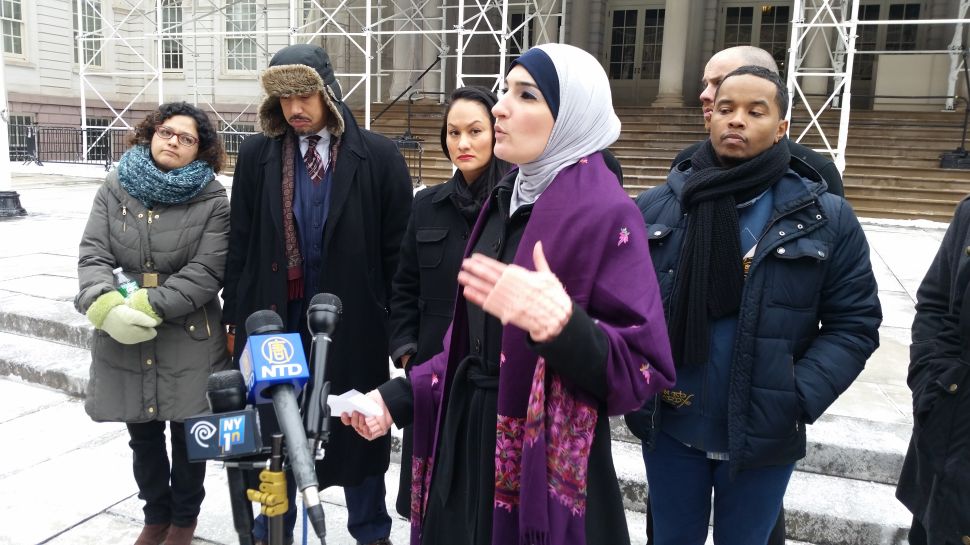