There was calm after almost-storm Juno. Too much of it, according to city night owls who found the enforced curfew and lack of Ubers infuriating until they were let let loose at House of SpeakEasy’s Gala Wednesday night, sponsored by Aberfeldy and Craigellachie single malt scotches.

“I’m excited to be here!” smiled top guest Dan Stevens of Downton Abbey as he was speedily whirled around the room.

“Sorry!” Uma Thurman chirped, arriving a little late to proceedings, pausing only to pose for a few photos before joining her friend Waris Ahluwalia at her table. By then, patrons were enjoying Simon Doonan recounting an uproarious tale of his audition for the part of Nigel in the Devil Wears Prada. Actor Jim Dale, writer/producer Susan Fales-Hill and political satirist P.J. O’Rourke followed with their own stories on the theme of  “Runnin’ Wild,” or trying not to…

“Once I heard the topic, I realized I had to talk about the fact that I really couldn’t afford to run wild for a long time,” Ms. Fales-Hill laughed afterwards. As a multi-racial American, she said, she had to be cautious about her reputation due to racial prejudice: She told how she was taught to represent herself to the highest standards.

“Tonight was a huge success,” said organizer Lucas Wittmann. “The audience participation is real,” added co-chair Dr. Amanda Foreman, mentioning that the literary pop-quiz between tables was a hit.

“Sir, you need to leave! Please escort this man out of the premises, he’s not welcome here!” a security guard screeched as we entered the Park Avenue Armory for the Young Collectors’ Night at the 61st annual Winter Antiques Show last Thursday. The WASP-y social mixer was a coveted ticket—a ticket some septuagenarian party crasher sorely lacked. New York mag’s  Wendy Goodman played hostess, greeting Isaac Mizrahi before he rushed off  yelling “Fabulous!”

“I thought the show was very interesting,” mused interior design Geoffrey Bradfield after he walked the floor with protégé, Roric Tobin. “We were taken with the travertine table designed and used by Henry Moore at Carlton Hobbs. We are suggesting it as an acquisition to clients in Mexico City,” he dished, proving that while the youngsters were slurping back spitefully strong libations, there was work to be done for serious consultants. Admiring a rare collection of silver Fabergé monkeys at A La Vieille Russie, he added  “They might interest our clients in Jakarta, worth close to $ 1 million.”

Ready to spice things up a bit, we headed downtown for the first anniversary of Gilded Lily.

“We have always considered Gilded Lily a place where people from all walks of life could come, let loose and have a good time,” attested Eric Marx, one of the club’s co-owners as the Absolut Elyx flowed freely during arrivals. “Since Gilded Lily opened, we have become a melting pot of New Yorkers who keep coming back for the consistent party they always find.”

“Cam’ron came to do a special performance and Funkmaster Flex is doing a DJ set as a friendly favor to us,” Adam Spoont, the director of the joint, enthused as the chic masses crowded the banquettes and dance floor.

“I flew home early from Sundance to enjoy the storm and woke up to merely mild flurries,” Lisle Richards, the other co-owner, scoffed at the disappointing impact the blizzard actually had on our city. “I do love a good snow day, though.” Before Shindigger took the show to Verboten in Williamsburg for another party hosted by Dennis Ferrer, we asked the boys how they planned to end their night—any after-parties?

“There are some things that are just not fit to print,” Mr. Spoont smirked. 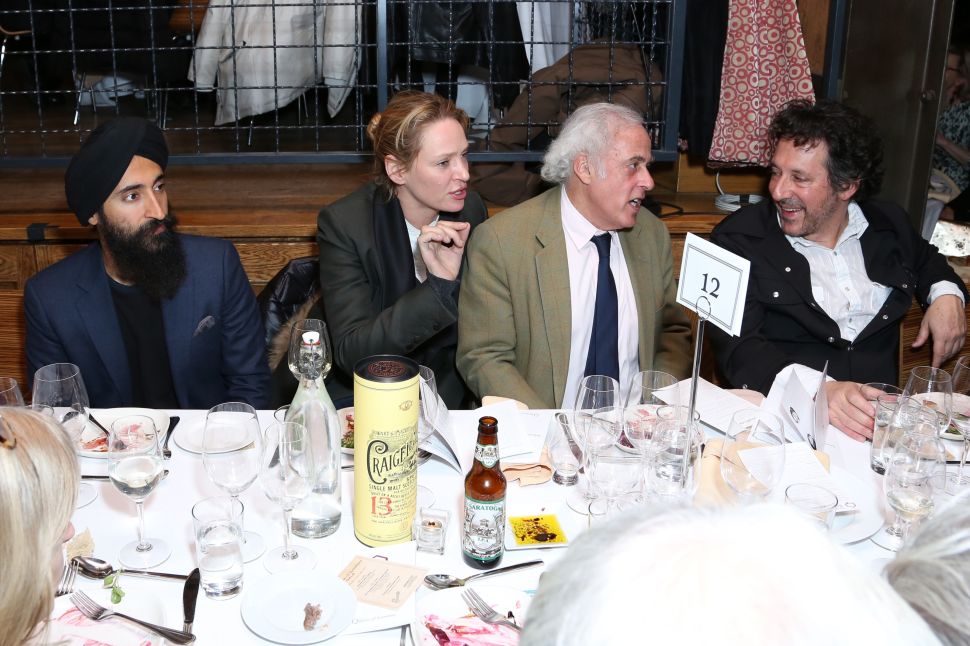