The family of the late Akai Gurley today tore into NYPD Officer Peter Liang, who fatally shot the unarmed 28-year-old black man in the stairwell of his Brooklyn building last year, and called for comprehensive changes to the police department.

After Mr. Liang’s arraignment, Kimberly Ballinger—Gurley’s domestic partner and mother to his child—and her attorney Scott Rynecki held a press conference outside Brooklyn District Attorney Kenneth Thompson’s office. Mr. Rynecki ripped into Mr Liang for entering the stairwell against orders, with his gun drawn and for allegedly conferring with his partner after the shooting as to whether they should call for medical assistance.

He went on to demand systemic changes in the NYPD to avoid a recurrence of the incident.

“It is now incumbent upon the city of New York, the New York City Police Department, to undertake a full review of their policies and procedures and training, both in the academy and after the academy, so that this event, this type of matter does not occur again. It must be prevented,” he said.

Ms. Ballinger thanked Mr. Thompson for obtaining an indictment of Mr. Liang, but called for a jury to find him guilty of manslaughter.

“This is just the first step in justice. Now all we need is a conviction, which I have faith we will get,” she said.

Gurley’s aunt, Hertencia Petersen, was less restrained in her rhetoric.

“He did not follow orders! So because of his not following orders, my nephew is no longer here! My nephew has been murdered! My nephew is dead! But Peter Liang can come and go as he please, on his own reconnaisance! Where is the justice?” she demanded, alluding to reports that Mr. Liang discharged his weapon in the dark corridor in terror.

Ms. Petersen suggested that Mr Liang, who is Asian-American, enjoys the benefit of a judicial double standard.

She echoed Mr. Rynecki’s demands for extensive changes in the NYPD.

‘My nephew’s life is sacrificial. Now changes will occur. You can bet on that!” she said. “We will prevail. Justice will be served for Akai Gurley. Remember that name!” 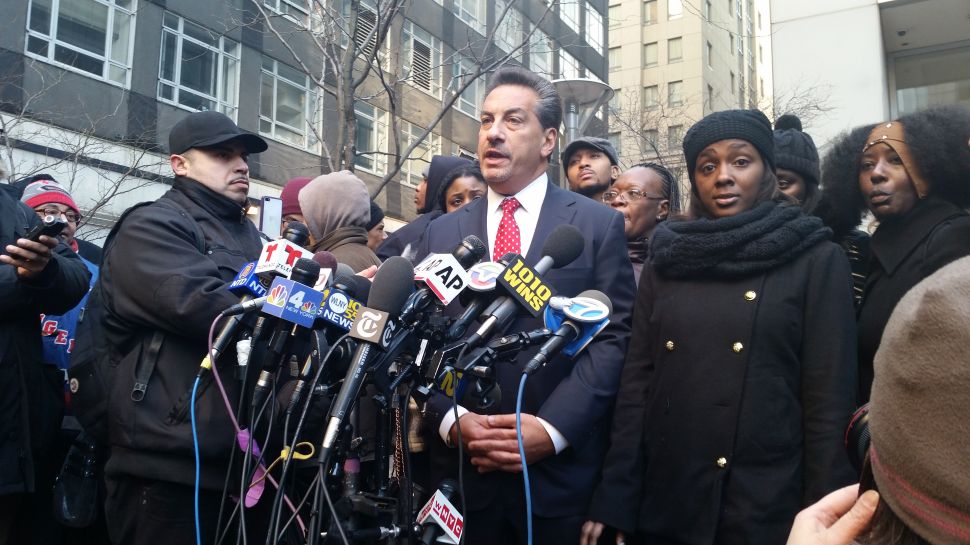