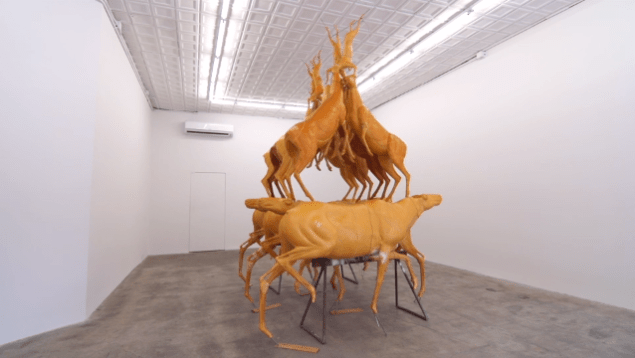 When you were younger and you played that game of trying to list all the 50 states, you always missed a couple of really good ones, say New Mexico or Alaska. Bruce Nauman is like that. No one would argue he isn’t a major artist, and he has kind of a cult, so much so that when you “get” him it’s kind of an electric shock. But whenever you make those lists of really important artists, he’s not there.

That’s likely to change. He’s been represented well and shown regularly by Sperone Westwater for decades, but one piece of his from 1989 is on view at the Gagosian Gallery space at 821 Park Avenue, and it reminds you not to leave him off that shortlist. It’s very strange, very cool and it may make you think Maurizio Cattelan owes Mr. Nauman a thank you and a basket of flowers. 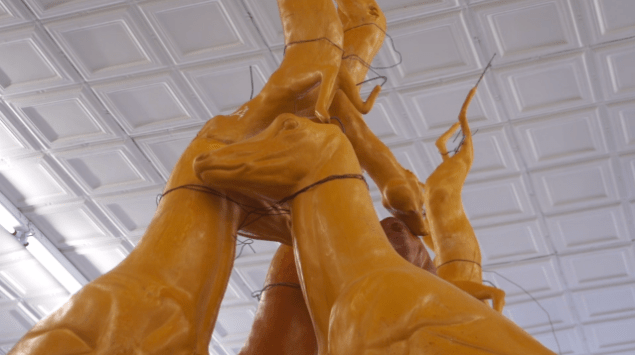 If you don’t know much about Mr. Nauman, he’s a sculptor and pioneer in video art (although Bill Viola gets more fuss made over him). He works in various styles and media (including the now sadly obsolete VHS tape) and, far from obscure, he represented the U.S. at the Venice Biennale in 2009. But, as art critic Paul Laster has said, perhaps his household-name fame has suffered because he’s not out in the art scene at parties, working the crowd. He lives quietly in the Southwest.

Few artists can be argued to have produced a masterpiece in the last few decades: Koons, whatever else you think of him, did with that bunny, and Maya Lin with that Vietnam Veterans Memorial so amazingly pulverizing and controversial when it went up, yet the controversy seems so ridiculous now because it altered how we mourn.

For Nauman, it’s Clown Torture, a video artwork of, no surprise, said harlequin screaming in pain, that once you see it you do not forget it. (Here it is on video—yes, click on it, watch it, then decide for yourself.)

The piece on view at Gagosian isn’t remotely as groundbreaking, but it sticks with you, too. It’s a tall pyramid sculpture of the models used to stuff taxidermied animals. The surface of these sculptures is slick and cool, the color an unnatural pale-reddish beige, the balance perilous. They looked skinned, they look awkward, it lampoons public sculpture as it salutes it.

The gallery’s description: “Animal Pyramid is a stack of seventeen taxidermy molds rising to twelve feet. The carnivalesque arrangement of these alien creatures made out of amber-hued polyurethane evokes the dichotomy of nature and sport: four upside-down foxes crown graduated rows of deer and caribou, eerily featureless—even ambiguous—without their prized pelts and horns. The entire ensemble is visibly cobbled together with wire, the work of a morbid puppeteer. Animal Pyramid disturbs with its vision of carnage submitted to an artificial and bloodless geometric order.”

Up through February 21, and worth a look. 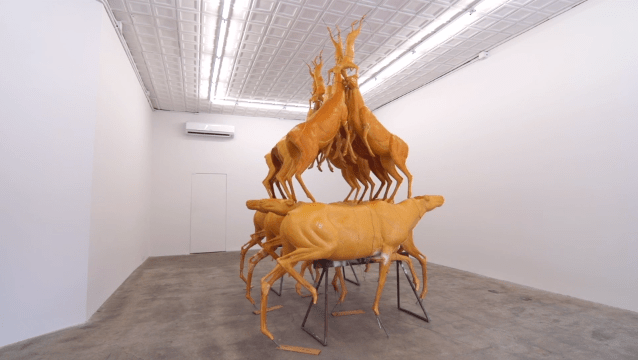