After his election, Bill de Blasio’s first hire was Anthony Shorris, who the mayor-elect described at a press conference as “the person I turn to to run the day-to-day operations of city government.” Despite a resume boasting senior positions under Mayor Ed Koch, Governors Mario Cuomo and Eliot Spitzer, as well as a stint running the Port Authority, Mr. Shorris—whose official title is first deputy mayor but whose wife reportedly calls him the “city’s super”—maintains a low profile and a self-effacing manner. He recently took time from his demanding job to chat about what it’s like to run the show when the mayor’s out of town, imagining his alternative universe and the differences between bureaucrats and the politicians they serve.

Do you learn something from every executive you work for? I’ve never had to work with somebody who I didn’t think was smarter than I was. That’s been great. I’ve never worked with somebody who had the sense of humor [de Blasio has]. Koch was very funny but more outside funny than inside funny. He was actually pretty serious in the office. Eliot Spitzer wasn’t particularly funny in the office. [De Blasio] has the same level of intelligence [as the others], but a much easier personality to deal with. He has a more consensual style of running his government. But he brings something that I don’t have, which is he’s much better connected to the city than I am. I don’t need a bureaucrat to work for. I’m actually really good at being a bureaucrat.

Do you think bureaucrats and elected officials just have different personality types? Have you ever considered running for office? The only thing I ever ran for was county committeeman in 1978. That was the end of my political career. I don’t have the extroverted personality that I think is required for that, I was not ready to give up so much of my personal life as is required, as you do a lot of it on nights and on weekends. And I love the government. The truth is, I’ve always loved the government. I was a government major in college; I was a government major in graduate school; I’ve been doing this since I was 16 years old.

What’s it like when the mayor is gone for the day and you’re in charge? King for a day? Yeah right. I mostly count the days until he comes back. It’s actually a lot less of a big deal than everybody thinks, because it’s not like there aren’t phones and emails available. When Koch was mayor, he’d go away for two weeks at a time on trips overseas, and you couldn’t get him at all—he was actually gone. He’d call in twice a day and that was it.

What still surprises you about the city? What surprises me is its capacity to surprise me. The level of unexpected things that we have faced in the first year, from Ebola to massive snowstorms to in some cases tragic shootings and acts of violence to enormous successes that I never expected—our municipal ID card program that like 200,000 people signed up for in two weeks—these things actually are pretty shocking to me, and I’ve been around a long time.

If you weren’t working in government, what would you do? Everybody else in my family is a writer. My father was a writer. My wife is a writer. My mother wrote books. My son wants to be a writer and has published. So there was always some risk of that, I suspect.

Do people ever recognize you? On the street?

Yes. Do people ever say, “Hey, there’s First Deputy Mayor Tony Shorris”? I’ve been at the grocery store and had people say you look a little familiar. They can’t really tell whether it’s because I’ve been receiving accolades or because I’ve been indicted. It’s not a job where I expect to or yearn to be particularly recognized. This is as far as I go. 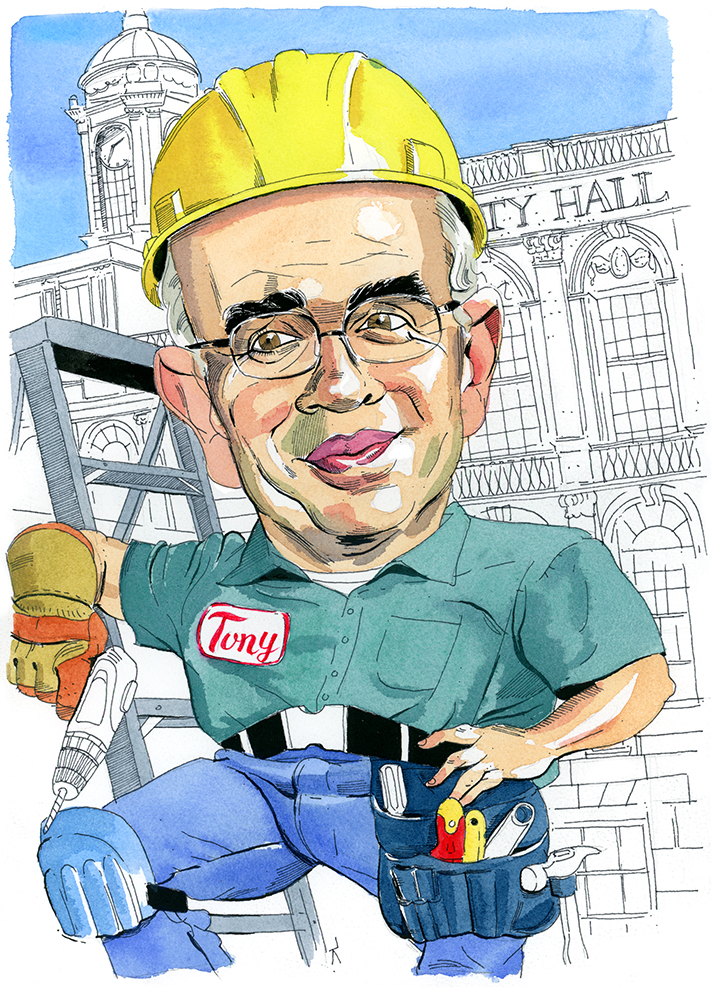